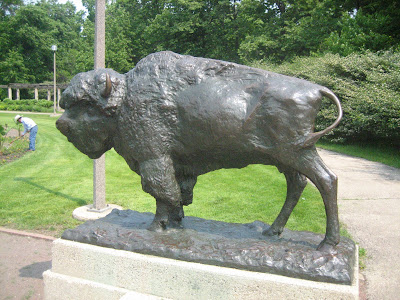 [This piece also appears in Time Out Chicago magazine, www.timeoutchicago.com.] 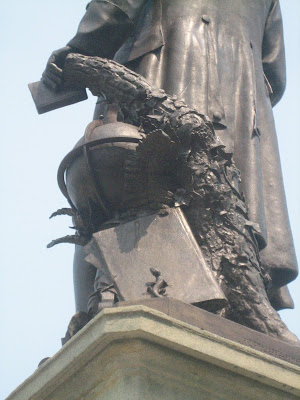 Nearby stands an 1892 statue of Prussian naturalist and explorer Alexander von Humboldt with an adorable bronze lizard crawling on a manuscript by his feet. Crossing von Humboldt’s namesake boulevard to the west side of the park, Drebenstedt points out the man-made river created by Danish immigrant Jens Jensen, who quickly rose up the Chicago Park District’s ranks to become its foremost landscape architect. Recently the park district installed solar- and wind-powered pumps to create a current and prevent stagnation. 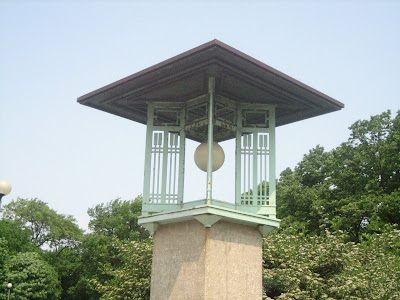 Two blocks south is the circular rose garden Jensen designed, flanked by bronze bison and Japanese-inspired light fixtures. I suspect that two men in hoodies lurking beneath the trellis on the far side of the garden are doing a drug deal. We roll across Division Street to the 1895 Humboldt Park Stables (1150 N. Humboldt), with Hansel-and-Gretel-esque gables and half timbers, slated to re-open as the Institute for Puerto Rican Arts and Culture. 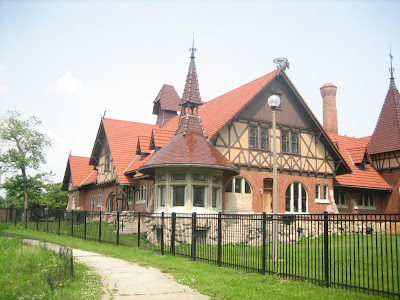 Rolling north along the park’s perimeter trails, we startle a pair of young women sashaying down the path, then catch a whiff of roast pork from La Esquina del Sabor food truck (1500 N. Humboldt). Drebenstedt pulls over at North/Humboldt by a kiosk outlining the development of the Boulevard System. In 1870 the West Park District hired architect William Le Baron Jenney to design the major western parks, including Humboldt, and tree-lined thoroughfares to connect them.

As we pedal north up the quiet service drive along Humboldt Boulevard Drebenstedt points out the occasional mid-1800s wood-frame house. “If you ignore all the other buildings around them you get a sense of what it was like then – farm houses in the middle of a prairie.” Bicycle magnate Ignaz Schwinn’s mansion used to stand at the southwest corner of Humboldt and Palmer, and bike racers competed on the oval-shaped roadways around Palmer Square Park (2100 N. Humboldt). 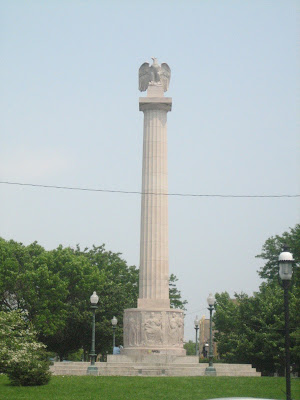 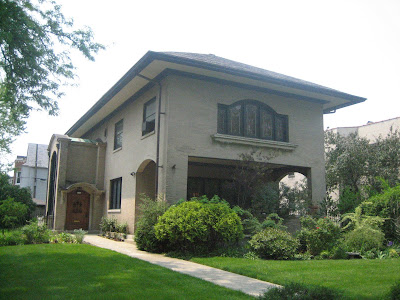 Making our way south to Humboldt Park we check out twin mansions at 3069 and 3071 W. Palmer, built at the turn of the century for two men who co-owned a tannery. One house is drab beige brick but the other is now painted with cheerful scarlet and green accents. 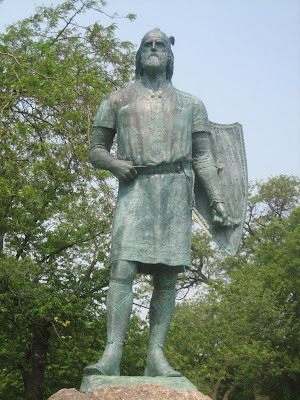 Back in the park Drebenstedt points out a 1901 bronze sculpture of Viking explorer Leif Erikson (1400 N. Humboldt), sculpted by Sigvald Asbjornsen, and bankrolled by the local Norwegian community. At the boathouse, old men fish off a pier at the north side of the building with the Sears Tower looming in the distance. Although I’ve lived in Logan for years, I feel like I’ve just seen the neighborhood in a whole new way. 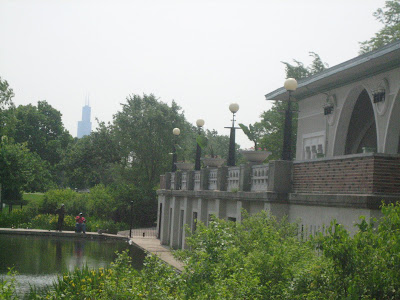 Posted by John Greenfield at 10:46 AM

This is great! I grew up in Humboldt Park and Logan Square, I would like to do this bike tour.

The architect of the house above George Maher, and is at 2703 W Logan Blvd. Having lived there, I know this house.