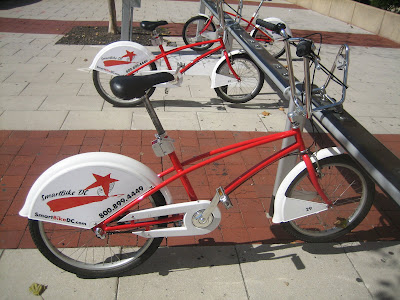 Wouldn’t it be cool if there were a bunch of locations in downtown Chicago where you could rent a bike at the spur of the moment, allowing you to make connections between other transportation modes, run errands or go on a spontaneous cruise?

This is already the case in Washington, D.C. On a recent visit to our nation’s capital, I met with Jim Sebastian, Supervisory Transportation Planner for the district’s department of transportation. He showed me around the city’s new public, self-service bike rental program, SmartBike DC, the first of its kind in the U.S.

Automated bike rental is already commonplace in Europe with various services now established in several French, German, Spanish and Scandinavian cities. Established last year, Paris’ Vélib’ service has become the leader with 20,000 bikes available from 1,450 kiosks, located every thousand feet or so in the city center. 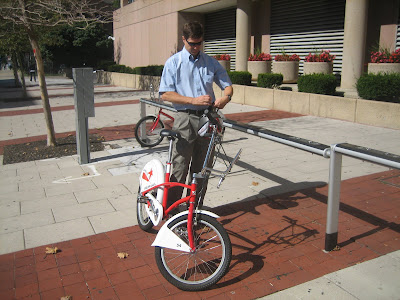 I met with Sebastian outside his office at one of the ten existing rental racks, holding a grand total of 120 bikes, near Metro rapid transit stations scattered evenly throughout the central city. Unlike many of the European services which allow anyone with a credit card to rent a bike, for now Smartbike DC requires users to sign up in advance on line, pay a one-time $40 use fee, and wait to receive a swipe card in the mail. Swiping the card at the bike rental rack allows you to un-dock one of the bikes; at the end of your session you place the bike back into the rack and it locks automatically.

“I don’t think we’ll go to the Paris model where all you need is a credit card,” says Sebastian. “I could steal your credit card, swipe it into the system and make off with a bike and you’d be responsible.” He adds that while Washington’s bike infrastructure has improved in recent years, it’s still not up to Parisian standards, so it might not be a good idea to have tourists using automated rental bikes in hectic D.C. traffic. “That’s a crazy combo I think,” he says.

D. C.’s system was created as part of the city’s recent contract with Clear Channel Outdoor to provide bus shelters with advertising placards, similar to Chicago’s deal with JC Decaux which led to the installation of thousands of bus shelters at no cost to the city. Clear Channel provides the district’s bikes and other hardware and handles the day-to-day operations of the rental system.

Chicago has been kicking around the idea of an automated bike rental system for a few years now, but it’s going to take some time before we get one. According to CDOT spokeswoman Maria Castaneda, last year the City put out a request for proposal for such a program. They received two responses, but neither was deemed a good fit for Chicago because they did not meet the City's criteria of offering bikes at low cost or no cost to users.

Earlier this year JC Decaux submitted a proposal to add a bike-rental component to the existing bus shelter contract, says Castaneda. Currently the City is reviewing that proposal, while also considering issuing a new RFP to seek more proposals. Castaneda adds that Chicago is looking at existing programs like Vélib’ and SmartBikes DC to determine how many bikes and which locations would work best for our town, as well as to determine the fee structure and liability issues.

D. C.’s bikes are designed to be comfy, low-maintenance and theft-resistant. With their small frames, ape-hanger bars and unevenly sized wheels they look a bit like clown bikes. Full fenders, a chain guard and a three-speed internally-geared hub makes them weather-resistant while motion- and light-sensitive head and taillights ensure that if it’s dark out and you’re riding, the bike is illuminated. A front luggage rack is handy for stowing a bag or briefcase. “I call it the no excuses bike,” says Sebastian. 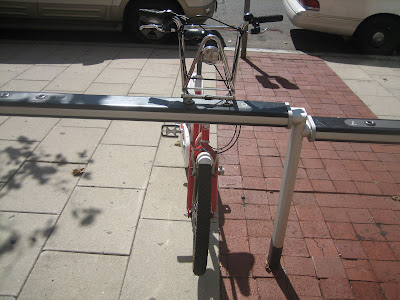 To deter thieves from stripping off components, the bicycles feature unique parts that are not compatible with other bikes. The bolts require a special star-shaped wrench. While the Parisian system provides skimpy cable locks to riders, SmartBikes DC requires users to bring their own locks, unless they are just taking a bike from one rental rack to another across town. But Paris loses about 300 bikes a year, according to Sebastian.

Helmets are also BYO and are strongly encouraged but not compulsory. Members are obliged to sign a document saying that they’ve read the booklet Safe Cycling in Washington, D.C., based on a guide written for the City of Chicago by Dave “Mr. Bike” Glowacz.

Each D. C. rental rack has slots for 9-15 bikes but to allow some “slack” in the system they are not fully stocked each day, so there’s space for parking bikes that have been ridden from other locations. A special van that can carry nine bikes at a time is used for redistributing bikes and maintaining them.

Sebastian let me take one of the bikes on a test ride on a few blocks of bike lane streets. With its fat tires and upright sitting position, the bike was a lot of fun to ride. It seems like a design that would be comfortable for users of various sizes and experience levels. 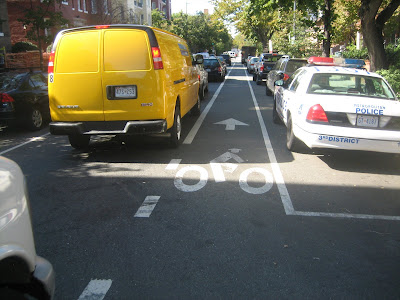 Afterwards, Sebastian updated me on other bike and pedestrian initiatives in Washington. He’s got a handful of staffers working under him: one coordinates bike lane and bike rack installation; another plans off-street bike trails; another deals with ped issues; another is responsible for a Safe Routes to School initiative; and another works on programs to promote transit use and ride sharing.

There used to be only a few bike lanes in this city of about 600,000 (5.3 million metro) but within the last few years they’ve reached 37 miles of lanes. This compares favorably to the roughly 110 miles in Chicago, with a population about five times as large.

The District has installed about 900 on-street bike parking racks. Sebastian says the district has been successful in encouraging office building managers to provide bike parking inside the garages. “It’s a carrot approach,” he says. “we can provide them with ‘U’ racks on rails, but often the company will buy their own racks.”

The District recently broke ground for a new bike station at D.C.’s Union station, a hub for Amtrak, commuter rail and Metro trains. Currently there is space for 50 bikes outside the station but theft and vandalism are common. The 500 square-foot bike station will provide secure indoor parking for 150 bikes, using the same Josta brand double-decker racks that were installed in Chicago’s Millennium Park Bike Station, as well as rental and sales of bike accessories.
Posted by John Greenfield at 5:00 AM 3 comments: 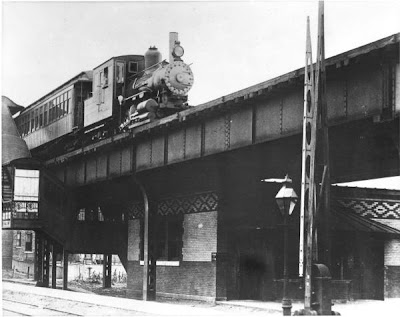 [This piece also ran in Time Out Chicago magazine, www.timeoutchicago.com]

On May 27, 1892, the Windy City’s first elevated railway, the steam-powered Chicago and South Side Rapid Transit Railroad, AKA the “Alley ‘L,’” rumbled into action, leaving from a downtown station at 550 S. Holden Ct., a glorified alley between State and Wabash. “This essentially helped put Chicago on the map as a major metropolitan area,” says CTA spokeswoman Catherine Hosinski. Tracks were erected above City-owned alleys all the way to 39th St., bypassing an 1872 law requiring signatures from adjacent property owners to build along streets. 300 VIPs boarded the six-car train for the 3.6-mile maiden voyage to the Spartan south terminal at 39th. There a dining car was added so a nosh could be served to the bigwigs on the return trip. Soon afterwards public service commenced with trains running as frequently as every 2.5 minutes for the 5-cent, 14-minute, one-way run. The downtown station was decommissioned in 1949 and a parking garage built around it in the ‘50s; in 1998 both structures were demolished to make way for a surface lot.
Posted by John Greenfield at 2:00 AM 4 comments: