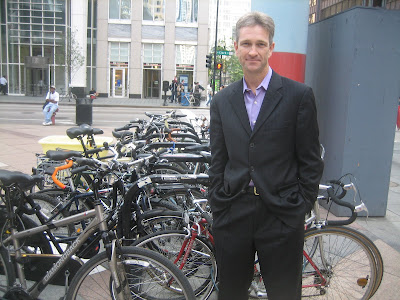 On August 17 Ron Burke took the reigns of Active Transportation Alliance (formerly Chicagoland Bicycle Federation), the nonprofit that advocates for better conditions for walking, bicycling and transit. He’s filling the shoes of Rob Sadowsky, who left ATA in June to lead Bicycle Transportation Alliance in bike-crazy Portland, Oregon. Burke, an expert in environmental policy, comes to Active Trans, the region’s advocate for better walking, biking and transit, from a job with the Union of Concerned Scientists. Before that he worked for the Illinois Environmental Protection Agency.

I caught up with Burke on his second week at ATA to discuss his background in promoting healthy travel options, his qualifications for leading one of the Chicago region’s key advocacy organizations, and the challenges of promoting green transportation in a sprawling, car-dependent metropolis, and why he thinks six-dollar-a-gallon gas may be the push it takes to bring about a revolution in transportation policy.

Tell me about your background promoting green transportation.

Let me give you my quick bio. Before Active Trans I was the Midwest office director with the Union of Concerned Scientists [a nonprofit which uses scientific research to lobby for policy changes to address pressing environmental and social problems]. Prior to that I was associate director with the Illinois Environmental Protection Agency. Prior to that I was deputy director at the American Lung Association of metropolitan Chicago. And before that I was with the United States EPA.

I have primarily worked on environmental policy throughout my career, although that overlaps quite a bit with transportation policy. And in the 1990s in particular I worked very closely with Chicagoland Bicycle Federation while I was at the American Lung Association on a number of initiatives. [ATA co-founder and longtime executive director] Randy Neufeld and I spent a lot of time at CATS [Chicago Area Transportation Study, now Chicago Metropolitan Agency for Planning, an agency which helps select local transportation projects to receive federal grant money] working on implementation of the first ISTEA [Intermodal Surface Transportation Efficiency Act] bill in 1991, which included for the first time federal CMAQ [Congestion Mitigation and Air Quality] grant dollars.

As you might imagine, Randy and I thought it was very important to spend that CMAQ money on transportation options that might enable people to get around without a car – bicycling, walking and transit. The CMAQ committee at CATS had a different perspective for the most part. They were more inclined to put the lion’s share of that money into highway projects that they argued would relieve traffic congestion and therefore reduce air pollution.

So Randy and I spend a lot of time educating them and advocating for the merits of non-motorized modes for mitigating congestion and reducing emissions. Those were the main criteria for CMAQ dollars so we had to make the argument in that context. We talked about how when you build a road you eventually just get more traffic so you wind up with the same level of congestion that you had before, just on more lane miles – not really good for air quality.

Why did you apply for this job?

I have always been passionate about bicycling, walking and transit, at least since I came to Chicago in 1990, and the benefits of those modes. My wife [former ATA Near West Suburban Coordinator Pamela Brookstein] worked at CBF/Active Trans for 12 years, so I was very familiar with the organization in that respect. She left just recently, coincidentally, to take a new job [at a new Cook County Department of Health anti-obesity initiative called Communities Putting Prevention to Work]. I’ve had a lot of respect for the organization for many years, so I’m very committed to the mission.

I’m also excited to see that the public has come around, more and more, to the Active Trans mission. There’s far more support nowadays for livable communities that are bike-able, walk-able and transit-friendly. There’s more awareness of the value of having communities like that, and the importance of those options for the regional economy. It’s become increasingly clear to the public and to the business community that we cannot continue sprawling, car-dependent development. It’s not efficient, it’s not good for the economy, and it’s especially problematic when you’ve got five- or six-dollar-a-gallon gasoline just over the horizon.

Active Trans members have realized for a long time that bicycling, walking and transit have many, many benefits to communities and the regional economy, but I think you’re seeing more and more converts to our way of thinking. People have seen road projects that were supposed to relieve congestion not succeed, and businesses find it increasingly difficult to get the workers they need in some cases because they can’t get to work, because there often aren’t safe, affordable options for people who don’t own cars.

In 2008 vehicle miles traveled in this country went down for the first time since 1984, when the FHWA [Federal Highway Administration] first started keeping track, in large part because of four-dollar gasoline and the economic downturn. But I think we got a taste of what’s on the horizon back then. The business community woke up to the reality that we just cannot be as car dependent as we are today and still have a thriving economy. We need to be ready for six-dollar-a-gallon gasoline.

You and I see the value of these transportation options, for a lot of different reasons, but sometimes dollars-and-cents arguments are what it takes for some people to wake up and see the reality, and I think that’s what happened back in ’08. Six-dollar gasoline is going to drive a lot of people out of their cars and looking for options, options that unfortunately don’t exist in a convenient and affordable way for a lot of people. So it’s a good time to be taking over the leadership of Active Trans.

What strengths do you bring to the executive director position?

I have a good deal of senior-level management experience including at the not-for-profit level. The programs at Active Trans are very similar to the types of programs that I’ve managed over the years. We do policy and advocacy, community education, transportation planning – those are all types of projects I’ve done over the years. Advocacy and education, and outreach and organization, are what I’ve done for the most part. I have a bit of a learning curve when it comes to learning some of the programmatic content, since I haven’t worked on transportation planning as much as I have on environmental issues. But I’m certainly not starting from square one, due to my own personal experience with Active Trans and transportation planning.

What are the greatest challenges for Active Trans in the next few years?

We continue to be challenged by the fact that our region is still overly sprawling and car dependent, and there are still too many obstacles to using bicycling, walking and transit. Often those options are not safe, or affordable or convenient. The good news is we’re seeing some progress for sure. But we have a long ways to go. Land use and infrastructure is not as conducive to bicycling, walking and transit as it needs to be, and obviously the long-term goal of changing that is at the heart of Active Trans’ mission.

Another obstacle is that government funding is in short supply because of the economic downturn, especially at the state and local level. There’s just not as much money around to fund some of the projects we’d like to see implemented. Those are a couple of big challenges.

What upcoming Active Trans projects excite you the most?

To be honest I’m still getting up to speed – this is my second week on the job. I’m still evaluating what’s on our plate. Having said that, I’m not coming across any program that we’re doing that I’m not excited about. The staff’s really amazing, doing a ton of good work. I’m excited about some of the legislative successes that happened this past session to make our roadways safer for all users and not just drivers, like a new law requiring drivers to stop for pedestrians in crosswalks.

I’m really excited about strengthening our base, which is of course bicycling and pedestrian projects through advocacy and education. Bicycle use is growing significantly and that’s exciting. I’m excited to continuing growing in that area, since bicycling has been the heart and soul of our organization for a long time. I’m also excited about branching into a new area, which is transit. When the organization broadened its mission a couple of years ago and changed the name, that mission expansion included transit. The challenge I have from the board is to figure out how we can be most effective in representing transit riders and ensuring that transit is safe, affordable and convenient for as many people in the Chicago area as possible.

What kind of transportation mix does your family use?

We live in Oak Park and we walk and bicycle a lot around town. We do have a car we use primarily for carpooling and longer family trips and vacations. I bike to a Green Line station and take the train to the Loop for work. Pamela’s new office is only a few blocks from our house in Oak Park so she walks. We walk and bike to go the park, go to the grocery store, go to a restaurant, things like that. You name it we use it.
Posted by John Greenfield at 2:00 PM