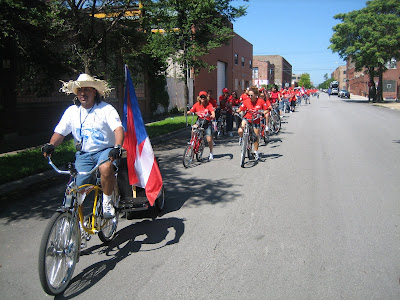 Salsa music blasts from a sound system trailer with a big Puerto Rican flag attached, pulled by a guy in a traditional straw hat on a classic yellow Schwinn cruiser. Behind him ride a hundred men, women and kids wearing matching red t-shirts, blue shorts and white sneakers, the colors of the flag.

The club gathers every other Sunday during the summer in Humboldt Park, Chicago’s Puerto Rican community, to show off their cycles and parade around the neighborhood or take excursions to the lakefront or the Loop. “We have three goals,” says Luis Mercado, a mental health counselor who founded the club in 2000. “Ride beautiful bikes, build friendships and enjoy the sights of our wonderful city.”

“Schwinn cruisers are a cultural thing for Puerto Ricans,” explains Mercado. “It goes way back to when we were kids.” He says about half the towns on the island, a U.S. territory, have bike clubs. Similar clubs have formed in mainland cities like New York and Cleveland, but Mercado says the Chicago Cruisers is the biggest. 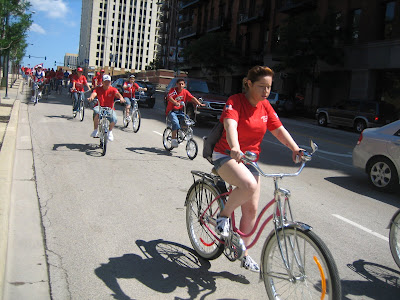 Although most of the members are Puerto Rican, you don’t have to be a boricua to roll with this family-oriented club. “Everyone is welcome as long as you have an old-fashioned bike,” says Mercado. “And as long as you are a good person – no gangbangers.”

Cigar smoke wafts in the air as the mass of riders makes its way southeast towards the Sears Tower. Motorists beep their horns in greeting and pedestrians do a double take, then smile and wave as they see the huge group.

“Cruising is a good healthy activity that keeps families together,” says Angel Barcero, a school custodian riding a chrome-framed Phantom. His son Juan, currently serving in Iraq, used to ride with the club as well. “It would be nice if every family did this.” 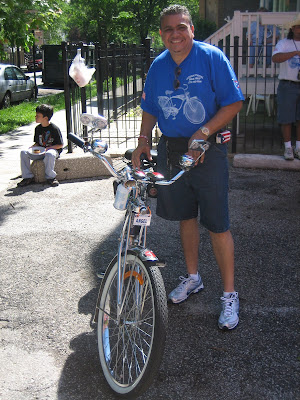 The Cruisers arrive at the parade staging area on Columbus Dr. and set up their bikes in a line along the curb so spectators can check them out. On a nearby float musicians are playing Puerto Rican folk music on conga, guiro, guitar and cuatro, the eight-string lute that’s the national instrument. 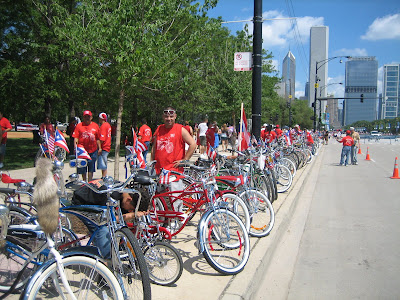 Holt Ellis, standing near his candy-green Schwinn, says that although he’s African-American, not Puerto Rican, Luis Mercado invited him to join the club when he spotted him riding around Humboldt Park. “The Chicago Cruisers are most definitely welcoming to all races and nationalities,” he says. 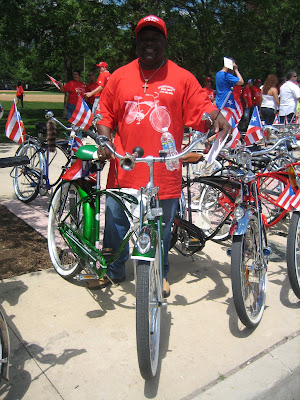 Asked why the Schwinn cruiser resonates with Puerto Ricans, he says, “Latinos and African –Americans, we all came up poor. Cruisers are accessible because you can buy one second-hand or piece it together and customize it to make it your own. They’ve become a Latino icon.”

Borinquen Unidos, another, smaller Puerto Rican club that rides souped-up adult tricycles, has joined up with the Chicago Cruisers for the ride. Hanging out by his trike, Juan Rosado says he got into three-wheelers because they’re unique and they give teens something to do besides drugs and gangs. “They’re also good for kids with disabilities who can’t ride regular bikes,” he says. 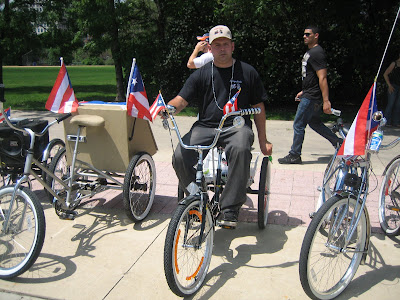 Juan Laureano, owner of the International Bike Shop, 3821 W. North Ave., is standing out by a red and black 1950 Schwinn Phantom cruiser in mint condition. Laureano, 58, is the man responsible for most of the bikes present – 90% are old bikes that he has salvaged and had chromed and re-painted. “When we ride it makes me feel young again, like a 30-year-old,” he says. 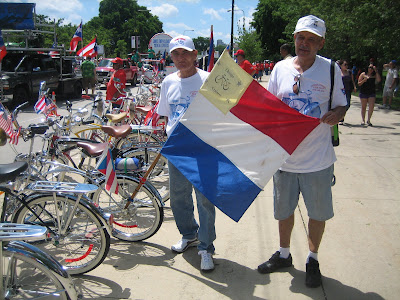 His daughter Betzy grew up with the bikes. “We were always at the old Schwinn Factory [on Chicago’s West Side], getting stuff wholesale – tanks, racks, decals and shock absorbers,” she says.

After the factory closed in 1982, lowrider bicycles eclipsed the Schwinn cruiser but Betzy says this timeless bike is coming back into style with Latino youth. “There’s been so many fads and trends and phases but the classic Schwinn cruiser still remains.”

Chicago Cruisers rides leave from Casa Puertorriquena, 1237 N. California Ave., every other Sunday, from mid-May to mid-September. Call Luis Mercado at 312-671-0654 for more info.
Posted by John Greenfield at 12:03 AM

Ok, so this is simply showing off.

This cruiser is what happens when you mix a classical-styled bicycle with a vibrant color pallet Hermosa Beach.

Nice to come here. I liked it very much. To check Moon Astrology Astrolika for the same.