Biking to work on Inauguration Day 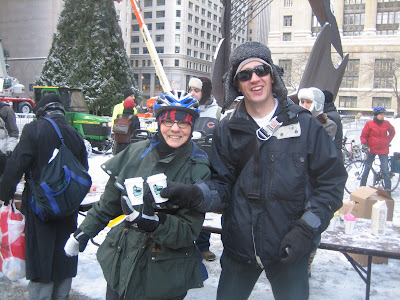 Each year Active Transportation Alliance (formerly Chicagoland Bicycle Federation) holds Winter Bike to Work Day on January 20, marking the anniversary of Chicago’s coldest day in modern history. This year the date happened to coincide with the most memorable inauguration in modern history, when Chicago’s own Barack Obama became our nation’s first African-American president.

The alliance commemorates that frosty day in 1985 - when temperatures at O’Hare Airport hit 27 below zero with wind chills as low as 93 below - and celebrates cold-weather commuting by serving breakfast to bicyclists at Daley Plaza. This year dozens of folks showed up for a healthy combo of cocoa and cheesecake, mingling on the plaza’s incredibly cold granite surface for as long as their feet could stand it.

I interviewed the cyclists about the significance of biking to work in freezing weather on the day of Obama's inauguration. They also told me whether they believe the progressive new president will have a positive impact on walking, biking and transit in the U.S. 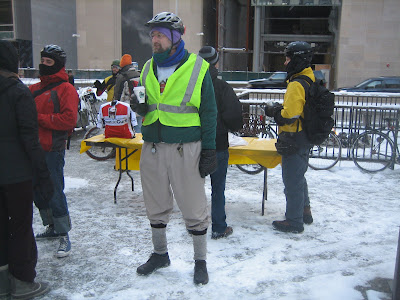 “Winter Bike to Work Day is a fun way to get people thinking about biking in the toughest conditions they can imagine,” said Randy Neufeld, Chief Strategy Officer for the advocacy group, at 8:30 am. “We also happen to have only about two and a half hours left of George Bush.”

Neufeld said the most significant aspect of the new regime for transportation is that Democrats will dominate Congress. “A new transportation funding bill is coming up this year and [Minnesota congressman] Jim Oberstar is in charge of the process,” he said. “He’s a friend of mine and a friend of cycling. That coupled with an administration that is going to be open to some major changes means we’re likely to win big.”

He said his biggest hope for the bill is that major financial incentives can be put in place for state and municipal governments to promote non-noxious travel modes as a way to fight climate change. “If you put a carrot out there that encourages [local governments] to reduce emissions, they’re going to go for that money.”

Cyclist Jeff Bar said he bikes to work every day, so riding on Inauguration Day has no special significance for him. “I hope there will be some positive changes for biking but I’m a little cynical,” he said. “At least we’ll have the right guy in office.” 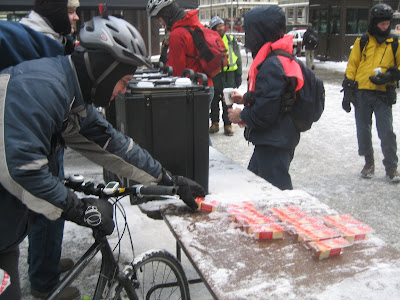 Steve Timble, Associate Publisher of the Chicago Reader dropped by the plaza before checking on employees passing out copies of the paper’s special inauguration issue on State Street. A longtime bike commuter, he had opted for the El train that morning.

“This is a very special day to be biking or taking transit to work,” he said. But he cautioned that while having a progressive president in office will help with transportation change, work has to be done on a micro level as well. “For example, if you want to get a bike bridge built in your community you need to work with your alderman, mayor or congressman.”

He said the upside of the down economy is that this is a great time to be advocating for appropriate transportation. “CTA ridership is at an all-time high – that’s what I’m jazzed about.”

Bike activist Kathy Schubert said that with a failing economy and two wars to deal with, Obama shouldn’t be expected to solve all the nation’s transportation woes as well. “He’s got so much on his plate he can’t possibly get to everything.” 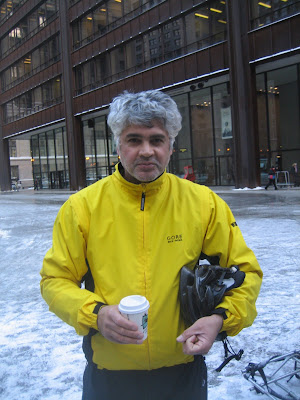 William James, who immigrated from England 35 years ago, confessed that the free breakfast coaxed him back on his bike for the first time in a month and a half. Dressed in thin layers, he said he said he was toasty warm despite the brisk weather. “The secret is a bottom layer of cashmere.”

“I think there is some symbolism here,” said James. “We’re hoping that the new president will be a lot more proactive on green initiatives. I think there’s going to be a general elevation in the public consciousness about saving energy and reducing one’s carbon footprint. Personally, I’m hoping for a revolution.” 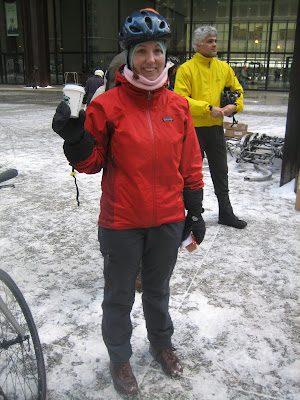 Asked whether Obama can make a difference in encouraging healthy travel modes, transportation planner Stacey Meekins said, “God, I hope so. It’s still an uphill battle but we have a better shot now with someone who will listen. But it doesn’t come down to just one person.” 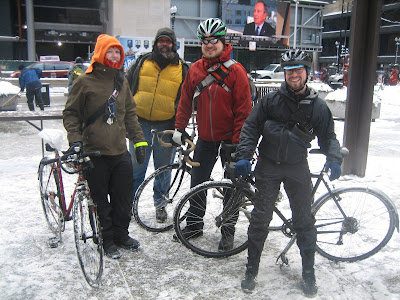 “The most important thing is your personal transportation choices,” said Lauren Sailor. She had just passed out about 20 homemade balaclavas on behalf of Bike Winter, a grassroots group that promotes all-season cycling. “Change starts with the individual.”
Posted by John Greenfield at 9:22 AM 3 comments:

by John Greenfield
[This piece also runs in the current Momentum magazine, www.momentumplanet.com.]

Would a safe-roads group by any other name still sound as sweet? The Chicagoland Bicycle Federation (CBF) – Chicago metro area’s cycling voice since 1985 and the largest bike advocacy organization in the US – hopes so.

For years, the Federation has promoted cycling both for recreation and local transportation; lobbied the City of Chicago to provide lanes, paths, and racks; encouraged suburban municipalities to create bike plans, and organized cycling events like Bike the Drive which bans cars each year on Chicago’s lakefront superhighway to make way for over 20,000 pedallers.

This last November, at the CBF’s annual membership meeting, the board announced they had changed the name to Active Transportation Alliance to better reflect the group’s expanded mission. With the transformation, the organization follows the lead of New York’s Transportation Alternatives, which has historically been the nation’s leading multi-modal advocacy group.

Spokewoman Margo O’Hara says the change will make the group stronger by broadening its base. For example, two cyclists were recently killed by cars within months of each other at the same intersection in Chicago’s Logan Square neighbourhood. The alliance is working with locals to brainstorm ways to improve safety at that intersection for pedestrians and transit users as well as for cyclists. “By talking to residents who may not be cyclists, we’re opening the door to new partners and bigger successes,” she says.

The name change may also help the organization apply for more health-related grants from foundations and community organizations – funding that might not be available to a bikes-only group, O’Hara says.

Longtime bike activist Payton Chung applauds the change. “Bike-friendly communities are also pedestrian and transit friendly, with nearby destinations, lots of route choices, and calm streets,” he says. “So the new name advances the Bike Federation’s longtime goals while bringing new constituencies to the party.”
Posted by John Greenfield at 12:04 PM 3 comments: