Stalled on the Bloomingdale Line 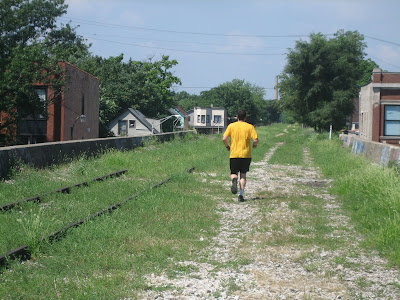 Sixteen months after choosing a firm to design the Bloomingdale Trail, the city still hasn't awarded the contract

[This article also runs in the Chicago Reader, www.chicagoreader.com.]

On a weekday morning in October, in gorgeous Indian summer weather, I rode my bicycle on top of the Bloomingdale line, the dormant railroad right-of-way that runs 2.7 miles across the northwest side from Logan Square and Humboldt Park to Wicker Park and Bucktown. I hauled my cruiser up the elevated rail line's embankment, accessing it from the south side of the parking lot of the McCormick Tribune YMCA, at 1834 N. Lawndale, near the western end of the line. Heading east, trying not to think about all the broken glass under my tires, I came to one of the new signs posted at another easy access point at Albany Avenue. In English and Spanish it read:

DANGER
PRIVATE PROPERTY
NO TRESPASSING
VIOLATORS WILL BE PROSECUTED 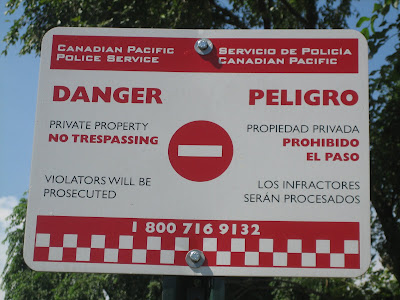 Since 2004 the City of Chicago has been planning to convert the line, currently owned by the Canadian Pacific Railway, into a multiuse trail and "linear park," similar in concept to Manhattan's wildly popular High Line, which opened in June 2009. The Chicago Department of Transportation has secured $3.1 million in state and federal funds to pay for the preliminary design and engineering of the Bloomingdale Trail, and in July 2009 the city announced its choice of Arup, a London-based multinational firm, to do this work, which is expected to take 18 months.

At that time, CDOT spokesman Brian Steele told me that his department hoped to officially award the contract to Arup by the end of the year. "Once the contract is awarded, the contractor can start work right away," he said.

But more than sixteen months have elapsed since then, and the contract still hasn't been approved.

In summer 2009, for a Reader story, I spoke with Bucktown residents whose houses abut the line; they complained that trespassing on the tracks had soared since the city and advocacy groups began publicizing the trail conversion concept. This illegal traffic included daytime use by bicyclists, joggers, and dog walkers, but the line was also attracting squatters and vandals at night. Neighbors said their buildings had been tagged with graffiti, rocks had been thrown through their windows, and that there had been several break-ins.

Alderman Scott Waguespack of the 32nd Ward held a closed-door meeting that July about the crime issue with reps from other affected wards, Canadian Pacific, the 14th District police, CDOT, and trail advocacy groups. Later that month most of the same entities showed up for a public meeting with about 60 residents who demanded that the line be secured. Shortly afterward the city fenced off vacant lots by the line at Kimball and at Milwaukee and Leavitt. Canadian Pacific promised to install the no-trespassing signs and agreed to let residents install fences and shrubs along the right-of-way to protect their homes—though it didn't offer to pay for them.

A path up the embankment at Milwaukee and Leavitt used to be one of the most convenient access points. But on my recent ride I encountered new iron fencing here on the south side of the tracks. 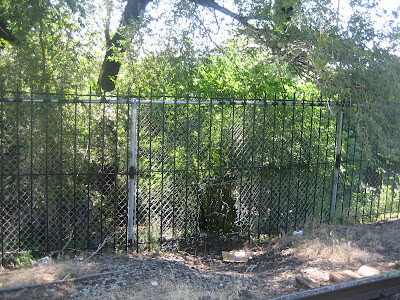 It's still possible to climb around the east side of these bars, over a rickety guardrail, albeit with the risk of a 15-foot fall to the street below if the railing were to break loose. At the line's eastern end, at Ashland and the Kennedy Expressway, chain-link fencing has been installed on the north, east, and south sides of the right-of-way—but door-size holes have been cut in all three sides. It's fairly easy to scramble up to the line here from the sidewalk on the east side of Ashland.

The area under the expressway seems to be a combination shooting gallery and art gallery, littered with needles, bottles, and food containers, and lined with an impressive array of colorful graffiti. 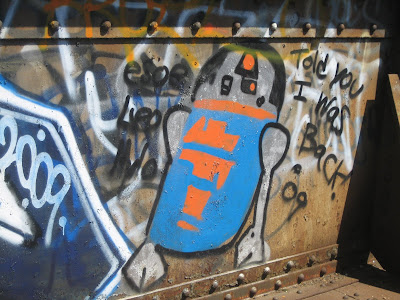 There are images of R2D2 and a walrus in a fedora, plus messages like "R.I.P. King of Pop" and "Squatrs show some respect! — our spot." Next to a Magic Marker sketch of a 40-ouncer and a spilled beer can someone has written "Smoke crack all the time, rain or shine." 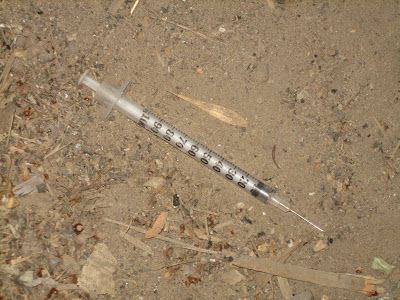 Canadian Pacific is eager to get rid of the property, which has become a liability that brings in no income—it has offered to sell it to the city for a dollar. But the city doesn't want to take responsibility for the line yet: CDOT's Steele says the right-of-way probably won't change hands until after the preliminary design work is done and the city has a better sense of the condition of the embankment and its 37 overpasses, so it can more accurately estimate the cost of building the trail. Most of the concerned parties agree the right-of-way will continue to be a haven for illegal activities until then.

Which will be when? Steele says his department completed its negotiations with Arup in March, after which the contract was sent to the city's Department of Procurement Services. Since then procurement has been gathering and reviewing supporting paperwork from the contractor. Shannon Andrews, spokeswoman for Procurement, says the contract "is in the final stages of being awarded."

Steele says it's not unusual for the finalizing of the contract to be taking this long, given its complexity and the fact that Arup hasn't worked with the city before, which meant more time was needed to prepare the paperwork. Asked about his earlier forecast that the contract would be awarded by the end of last year, Steele says, "Like all estimates, it was just that—an estimate."

Other city contracts seem to also be moving slowly these days, says John LaPlante, director of traffic engineering at T.Y. Lin, a firm that has worked on other Chicago multiuse path projects. LaPlante says several of his company's recent city contracts have taken as long as a year to process.

Progress has been made on the conversion in the meantime. In June the Park District approved a $450,000 grant to the Trust for Public Land, a national nonprofit, to coordinate the Bloomingdale Trail Civic Engagement and Stewardship Project, which will help raise public funding and private donations for the trail project and coordinate community participation over the next two years. The Trust for Public Land now estimates the trail will cost $60 million.

And the development of parks at future access points is under way. "We think of the trail as both the line and the access points, so from our perspective things are moving forward," says Ben Helphand, board president of Friends of the Bloomingdale Trail, which has been advocating for the project since 2003.

After the Trust for Public Land helped arrange for the $1.2 million purchase of four parcels of land for access points, in 2008 the city razed buildings at Leavitt and Milwaukee and at Albany. That fall a park opened between Albany and Whipple as a simple, sodded green space. This month the Park District began construction on a $500,000 project to relandscape it and install playground equipment, public art, benches, and lighting. The work should be done by summer 2011. In September the Logan Square Neighborhood Association unveiled a colorful new mural on the retaining wall on the other side of the embankment from the park, featuring a map of the Bloomingdale with images of people walking, running, and biking on the line. 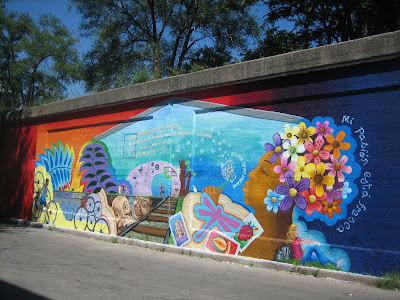 Besides the park between Albany and Whipple, there will eventually be seven other Bloomingdale access points: at the McCormick Tribune Y; between Kimball and Spaulding; at Mozart; at Maplewood; at Milwaukee and Leavitt; at Churchill Field Park, on Damen; and at Walsh Park, on Ashland.

The new iron fencing at Milwaukee and Leavitt is a reminder that some neighbors are still worried about security. This year Don Perini, owner of metal fabricator and erector Perini Ironworks, installed the bars at his own expense as well as the chain-link fences at Ashland, which he says were cut two days later. Perini, who lives next to the line in Bucktown, says he's had two of his window screens broken. "There are vagrants walking up there and people throwing things and lighting bonfires," he says. He'd like to see the line patrolled more often, but says the situation is better than it was last year: "The alderman [Waguespack] is doing a good job of monitoring it and getting the word out that it's private property."

Kerri Stojack, special assistant to Waguespack, credits the new fencing with reducing crime on the line. She says the ward office got about ten complaints last year about vandalism along the trail and has gotten fewer than five so far this year.

With the weather still unseasonably warm, I took another spin down the Bloomingdale at twilight earlier this month. Just west of California, on the middle of the rail bed, someone had set up a living room scene: ragged armchair, straight-back wooden chair, bookcase, and VCR atop a cabinet, all on an area rug. 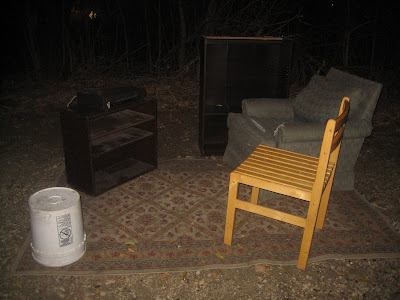 Further east, near Marshfield—above Walsh Park—I came across a couple of tents sheltered by a tarp tied to trees. Two long-haired bearded men were leaving the tents. They said they'd been hanging out on the line for years. "A lot of people know we're here and we don't cause no trouble," the taller man said.
Posted by John Greenfield at 1:00 PM

I live along the line, and I welcome the path. I anticipate itwill enhance my property value as a completed multi use path- as opposed to it's current condition as a vagrant sanctuary.

I'm interested in knowing how and why a firm from London was chosen . Does that hike up the costs for the project ?