Greg Borzo, author of "Where to Bike: Chicago" 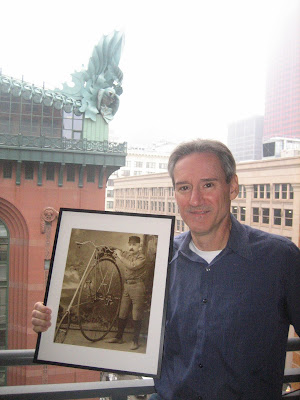 Most photos by Greg Borzo

Greg Borzo’s new book, Where to Ride: Chicago (BA Books, $24.95) isn’t just a guide to Chicagoland’s bicycle lanes, paths and trails. The 280-page book includes detailed cue sheets and maps for 72 routes across the region. But it’s also a celebration of the Chicago bike scene and the city’s history, bicycling and otherwise, packed with photos and background info. Borzo’s keen interest in the past and green transportation led him to write an encyclopedic history of Windy City transit, The Chicago “L.” So it’s no surprise he managed to slip plenty of local color into this bike guide, the first U.S. title in a series by Bicycling Australia.

I caught up with Borzo at his South Loop high-rise to talk about his background in cycling, the enviable task of scouting out the routes, “hidden gems” among Chicagoland bike trails, his favorite new bike movie, and how he managed to snag a photo of a sweaty, smiling Mayor Daley hanging out with cyclists on a Bridgeport hilltop. Borzo signs copies of Where to Bike: Chicago at a free launch party on Friday, February 4, from 6-8 pm at 1333 N. Kingsbury, the world headquarters for SRAM, a bicycle parts manufacturer. 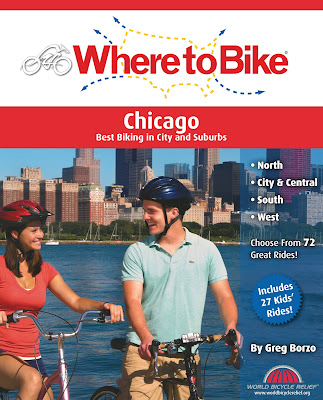 Do you have all day? I’ve been biking my whole life. I was born in Chicago, grew up in Des Moines and there the family had no car. So we all had bikes – there were nine kids and a dozen bikes. That’s how I got around ever since I was a kid.

I spent almost a year in Holland when I was 13. There I was amazed at the infrastructure and the popularity of biking. You’d see people wearing suits riding to work and groups of ten people biking together. I didn’t really have to go to school during that period and I had to keep myself busy somehow, so I was biking across town and eventually across the country.

Ever since then I’ve used biking for running errands, for commuting, and to go on bike vacations. A couple years ago a dozen of us went off to the Loire Valley and spent ten days riding our bikes. Recently I completed RAGBRAI [a bike tour across Iowa that draws 10,000 riders] and loved it. I’m a bit of a bike evangelist and I’ve brought a lot of friends along for the ride, so to speak.

Yes, I was trying to help people connect to biking through cinema. You can still read those movie reviews at the website for my new book, wheretobikechicago.com.

Medicine for Melancholy. It’s a black-and-white film with touches of color, kind of a moody piece. It’s a story of a couple who have a one-might stand and spend the next day together instead of just splitting off and disappearing. What I love about the film is the way that they naturally take to biking. They walk out the door and decide to bike to a museum together. For these San Francisco hipsters, to get around by bike just seems so normal. And the scenes of biking around San Francisco are very cool too.

Tell me about the process of writing Where to Ride, choosing the routes, scouting them out and writing them up. It seems like it must have been a lot of fun.

It was fun. The funnest part was riding. All the other work was real work but when I was riding I had to pinch myself and remind myself I was actually working. I came back to Chicago in ’76. Having lived here so long I’d ridden many of these trails over the years. So I thought I knew the bike scene and the rides pretty well, but in fact the book required a real good balance geographically, and a good balance in terms of difficulty and variety of road surface. So I had to do a lot of research and a lot of riding to select the rides that eventually wound up in the book.

The best part was learning new routes. Being a Northsider I discovered some great rides on the South Side, like the Old Plank Road Trail. A lot of rides had to be left out of the book because we could only have so many.

How did you get that candid photo of Mayor Daley with the cyclists on top of the hill in Stearns Quarry Park in Bridgeport? 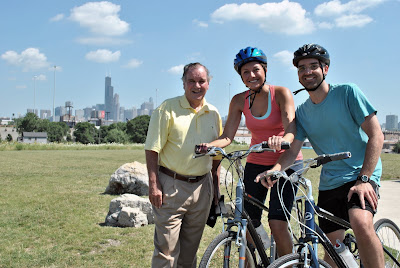 Stearns Quarry is a great place to get a view of the skyline. I was up there with a couple of friends on a Saturday morning, shooting for the book, and the mayor appears, trotting up the sidewalk. We hardly recognized him because he was just wearing a polo shirt and a baseball cap. There’s a parade of staffers and a couple of cops at the end of this line of people coming up the hill.

We started to chat and he remembered that I had written a book about the Chicago “L,” and he liked that book. So I asked him if we could take a photo of him and he posed with my friends, and it’s a good, candid photo of him. We caught the mayor on a very relaxed day. It was shortly before he announced that he wasn’t going to run for reelection.

That’s why he looks so happy?

Maybe that explains it. Afterwards we talked for about 15 minutes about bikes. I teased him, “You know everyone says you’re a cyclist but I’ve never seen you on a bike.” He says, “Yeah, that’s because you don’t get up early enough.” He goes out early in the morning and bikes on the lakefront.

Most people who have been riding a bike in Chicago for a while are familiar with the Lakefront Trail, of course. They might have done the North Branch Trail. They might have done the Green Bay Trail and Robert McClory Path up towards Wisconsin, some of the more obvious ones. What are some of the hidden gems that even experienced riders might not be aware of, that they might discover through your book?

The Des Plaines River Trail. A lot of Chicagoans know the part that’s near the city – I’m not a big fan of that section. Parts of it are really scruffy; parts of it are impassible. But what surprised me is when you get up north into Lake County it’s a gorgeous, gorgeous trail, beautifully maintained, with deep, clean, well-lit underpasses. It’s just like riding on glass, and the scenery’s gorgeous, with lots of tree cover. It’s crushed limestone but it almost feels like pavement because it’s so smooth.

Morton Arboretum. A lot of people don’t think about biking there but it’s actually one of the most pleasant places to bike. The roads there are paved and you’re sharing them with automobiles during busy times. But if you go out there during a weekday you’ve got the roads to yourself, the trees are gorgeous and there are flowers. It used to be open only once a week to bikes and that was for members only, but now it’s open to all cyclists every day.

The trails at Palos Forest Preserve are pretty rugged. They’re probably the best mountain biking in the Chicago area. But that area also has some trails that are not so rugged that you’re going to have to be riding a Stumpjumper. So that’s a good place to go, whatever level of biking you enjoy.

The Northbrook Velodrome is a hoot. You can go up there and pretend you’re a racer, doing laps and leaning into the banks. It’s in a public park, so whenever it’s available you can ride any kind of bike on it.

The Joliet Ironworks Heritage Trail goes through an amazing stretch of an old, abandoned industrial area. You go near the “Joliet Joint” prison from the Blue Brothers. You go by these old foundries and abandoned buildings and walls and causeways. Riding through that historic area you get a good sense of the former industrial grandeur of the area. 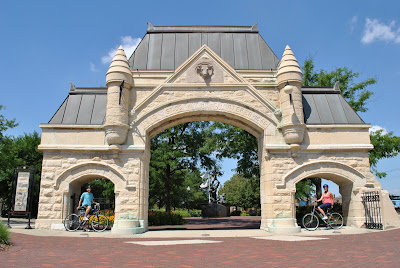 The Union Stockyards gate, showcased in one of the rides


How are you promoting the book?

There’s the party on February 4 at SRAM Corporation. Lots of people ride all winter in Chicago, but many people can’t get over that hurdle. We want to get them engaged early so that they start biking in April instead of July. Spring is right around the corner and you should get your bike out of the basement and tune it up, or buy a new bike, get that helmet and get out there and start biking. There’ll be nice days in March and April for fair-weather cyclists. We’re also going to have another book signing at the Book Cellar [4736 N. Lincoln] on Thursday, February 17 at 7 pm.

I’ve created a photo exhibit with up to 25 photos, using photos that are from the book, showing a cross-section of biking around the city and suburbs. That photo exhibit is available for free to any library, bookstore, bike shop or civic organization that would like to put it on display for two to four months. And I have several copies of it, so we can have it up at different places at the same time.

Anything else you want to tell me?

Yes. We partnered with World Bicycle Relief [SRAM’s outreach program which has donated over 70,000 bicycles to people in developing nations] on this book. A percentage of all the book sales will go to them. We want people to be aware of the good work that organization does in not only giving bikes to people in third-world countries but actually designing and building bikes that are specially suited for conditions in these countries: rougher roads and the need to transport water or medical supplies.

Also, we’ve partnered with Geoffrey Baer, who just came out with the video “Biking the Boulevards” for WTTW, so we want people to know about that wonderful program and to be aware that in our book the Biking the Boulevards tour follows his route and has photos of him biking.

One of the unique features of this book that none of the other titles in this series has is a chapter on local bike history. So we’ve got a little about the growth of biking in Chicago from the 1870s onward, looking at the fads that have come and gone, and some of the characters that have been involved in the local biking scene. There’s such a colorful history of bicycling in Chicago. It has been a center of the bike industry and the bike movement over the whole history of bicycling in the United States.
Posted by John Greenfield at 10:34 AM