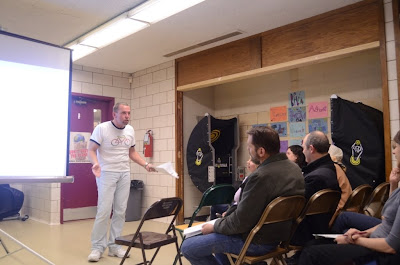 49th Ward alderman Joe Moore is famous for his crusades against big box stores and foie gras, but lately he’s been having more success with a new initiative called participatory budgeting. In this process, regular folks recommend projects for public funding and vote on how the cash is spent. First pioneered in Porto Alegre, Brazil, participatory budgeting is gaining popularity as a way to engage citizens and make government spending decisions more democratic.

Moore is the first politician to bring participatory budgeting to the U.S. Each of Chicago’s 50 alderman has an annual budget called “Menu Money” to pay for physical improvements to their wards, like replacing streetlights and fixing streets and sidewalks. Normally aldermen dictate how the money is spent but in 2010 Moore, whose ward is comprised mostly of left-leaning Rogers Park, decided to let his constituents have their say. 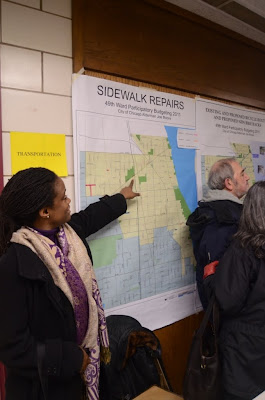 Last year, instead of just the usual meat-and-potatoes projects, residents voted to fund a community garden, a dog-friendly park, solar-powered garbage cans, historical marker signs, and murals under CTA and Metra viaducts. Transportation improvements will include a pedestrian signal, shelters at El platforms, new bicycle lanes and bike racks that will double as public art.

Now it’s time to decide how to spend the 2011 menu budget, once again $1.3 million, although this year Moore is setting aside $300,000 of that for cost overruns and ward emergencies. Volunteers have been researching ideas and drafting proposals, and everyone 16 and over, regardless of citizenship status, is eligible to vote for their favorite projects on May 7th. To prepare for this election, the ward has held several neighborhood assemblies to discuss the proposals.

At one of these meetings on a Thursday evening at Pottawattomie Park Fieldhouse, 7340 N. Rogers, about a hundred people fill the room. Sarah Lisy, who’s helping to lead budgeting process, addresses the crowd with updates on last year’s projects. Several are behind schedule for various reasons, including a worldwide shortage of thermoplastic for striping bike lanes. “Even though some of these projects haven’t moved as quickly as we’d like, we have to give the city a break because many of them were things they’d never dealt with before,” she says.

Representatives of the various committees make pitches for pet projects, ranging from repainting all the light poles along Sheridan Road, to installing wheelchair ramps at several beaches. Other proposals include reconfiguring intersections to make them more ped-friendly, installing a new playground at Touhy Park, and adding more police cameras throughout the neighborhood. The Transportation committee wants to add innovative bikeway designs, like “contra-flow” lanes that would allow bicyclists to safely ride against traffic on one-way streets, and “bike boxes,” colored pavement rectangles at the front of intersections where cyclists could wait for the light. 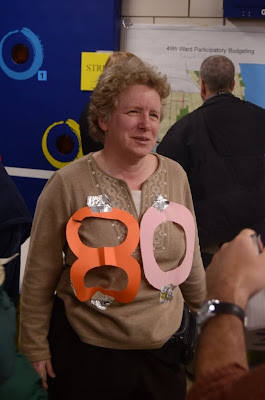 Sue Bibber from the Streets committee stands before the audience with a large “80” taped on her shirt. “We’re asking for eighty percent of the menu money to go to street resurfacing,” she explains. But Mike from the Traffic Safety committee, wearing a t-shirt featuring a rainbow-colored bike, begs to differ. “We want to put in a pedestrian signal at Ashland and Greenleaf, and that would cost over $300,000,” he says. “So no ‘eighty.’”
Posted by John Greenfield at 3:00 PM

Around the United States and here in Chicago, city leaders are increasingly asking residents for suggestions about budget spending. Here in the 49th Ward, we're going one step further. Through a novel experiment in democracy, I'm not just asking for your opinion--I'm asking you to make real decisions about how we spend our money.