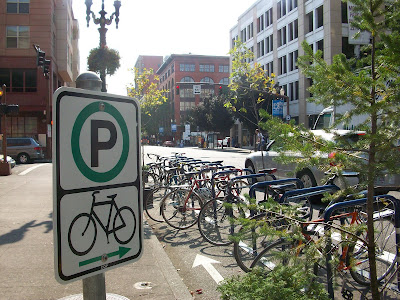 On-street racks in Portland (photo courtesy of City of Portland)

Chicago has over 72,000 on-street car parking spaces occupying a total area of over 3.6 square miles, more than twice the size of Hyde Park. This summer the city will help even the score for bicyclists by dedicating 140 square feet of roadway in Wicker Park for Chicago’s first on-street bike corral.

The Chicago Department of Transportation plans to install six “inverted U” bike racks protected by curb stops in a 20’ X 7’ swath of street next to a Bank of America branch at 1585 N. Milwaukee, just south of the buzzing North/Damen intersection. The Wicker Park and Bucktown Chamber of Commerce is donating the racks, curbs and installation, at a cost of under $5,000, according to the chamber’s Eleanor Mayer.

Replacing automobile parking spaces with on-street bike racks is already common in bike-friendly West Coast towns like San Francisco and Portland, Oregon. Since 2008, Portland has removed 107 car spaces and put in 64 on-street bike corrals at a cost of about $2,500 each, accommodating 1,140 bikes.

Chicago bike activist Payton Chung, a former board member of the Wicker Park chamber, first proposed the on-street bike rack concept to the neighborhood, leading to its inclusion in the chamber’s 2008 master plan. The chamber began discussing the idea with the Chicago Department of Transportation shortly after the plan came out, Chung says.

The Wicker Park racks will park twelve bikes in the same amount of space required for just one automobile. However, the corral will not actually displace any car parking since the space is currently a loading zone, which will be relocated 30’ north to what is now a no-parking zone. 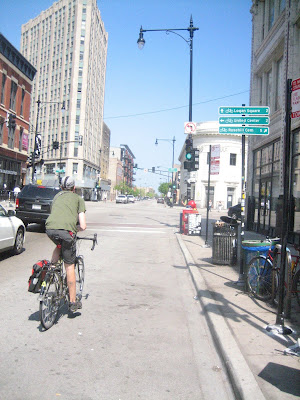 The future location of the Wicker Park bike corral

“Milwaukee Avenue is a great place to test this out,” says Ethan Spotts of the advocacy group Active Transportation Alliance. “We hope to see CDOT, local businesses and chambers of commerce embrace bike corrals around the city.”

Todd Gee from Break the Gridlock, a grassroots that promotes alternative transportation, is also excited about the on-street racks but says his group would have preferred to have car parking removed as part of the pilot, as has been done in other towns. “We’d like to see driving become less convenient, especially in areas like Wicker Park that are easy to access by transit.”

Sure, cyclists dig it, but will motorists revolt if sections of roadway are occupied by bicycle parking, especially if it means removing car spaces? “When we propose a corral sometimes there’s a little bit of pushback from neighbors,” says Sarah Figliozzi, who manages Portland’s on-street bike rack program. “Our response is, let’s see how it works for six months.” She says her city hasn’t removed a single corral and there are roughly seventy businesses on a waiting list to get one.

If Chicago motorist Brian Keigher is typical, there won’t be a major backlash here. Stopped at a red by the Flat Iron Building in his silver Subaru he responds, “There’s too many f---ing cars in this city, so it’s great they’re dedicating a little bit of space for the bikers.”

“Six years ago Chicago was ahead of Seville in terms of biking,” says Moreno. “Now Seville has physically-separated bike lanes and a bike sharing system, and they’ve closed down their center city to cars. It’s so easy to bike there everybody’s doing it: old people on adult tricycles, young men in suits and women in heels.”

The aldermen presented their findings last month during an Active Transportation Alliance gathering at Logan Square’s Boiler Room pizzeria. Moreno discussed the Wicker Park bike corral and other innovative ideas to push pedaling in the neighborhood. Since recent CDOT counts show bikes make up 22% of daytime traffic on parts of Milwaukee, Moreno is exploring the possibility of removing one lane of car parking on Milwaukee from California to Division to make room for a Seville-style separated bike lane. Asked how meter lessee LAZ Parking would react to the loss of revenue if car spaces were removed, Moreno responded, “F--- ‘em.” The crowd of cyclists went wild.

“What I meant was, this is 2011. I’ve talked to Rahm Emmanuel and he’s on board with moving forward in a bold direction so I’m not going to stop,” Moreno later explained. The alderman says he might be willing to swap LAZ’s lost parking spaces for a high-density garage on Milwaukee. “I say to them, if you want to be part of the solution, great. If not, feel free to sue the city.”
Posted by John Greenfield at 10:00 PM

Appreciating the persistence, you put into your blog and detailed guide you provide.