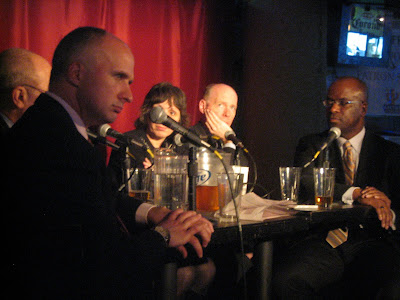 It’s a Tuesday night and Cactus Bar and Grill, 404 S. Wells, usually packed with stockbrokers from the Chicago Board of Trade, is instead filled with transportation geeks and urban planning wonks. They’re here for “Chicago Public Transit: On Track or Derailed,” organized by the Chicago Architecture Foundation. Participants will discuss the good, bad and ugly aspects of our local bus and train service, and propose ways to drag our outdated transit system kicking and screaming into the future.

“There’s four things we all can agree on,” continues Zotti. The first is the increasing importance of transit in Chicago – ridership on the Red Line recently surpassed its 1927 peak. Second, he says this is a city of disparate transportation needs – South Siders don’t have to worry about crowding on their end of the Red Line, but while trains serve the entire length of the North Side, the line terminates at 95th, five miles north of the city’s southern border. Third, there needs to be a more comprehensive approach to transit planning to allow for ambitious projects like creating a Circle Line to allow transfers between the various train lines a couple of miles outside the Loop. Fourth, there needs to be more transparency and openness in how these decisions are made, Zotti says.

Renn begins the discussion by asking the audience to “Imagine a public transit system that was a source of pride for residents.” Bey notes “Transit is this city is seen as the transportation of last resort.”

But Wisniewski says she is proud of Chicago transit. “Maybe it’s because I’m a transit geek but I take people from out of town to check out the CTA. I rode to every station in town for the Sun Times.”

Robling argues that “Service, service, service” should be the CTA’s priority, although he acknowledges, “In Chicago there’s a mandate for design because we’re the origin of modern design.”

Bey argues that design is key and South Side stations are sorely lacking in amenities. “At a nicely designed station you can buy a cup of coffee and drop off your dry cleaning and these businesses can be a revenue source for the CTA,” he says. “It would be great to put in something to make the Dan Ryan stations less bleak.”

Wisniewski agrees that making stations attractive and welcoming is important. “The 18th Street station in Pilsen has beautiful murals of Mexican life. This kind of thing isn’t very expensive and it gives you something to look at while you wait for the train.”

Next they discuss the merits of the CTA’s bus shelters. Schlickman says he was impressed to see J.C. Decaux, the street furniture company that maintains the shelters, shoveling them out the day after this winter’s snowpocalypse. “I find the shelters are OK, which in some cases is OK,” says Bey. But Renn finds the design of the shelters to be outdated and dull and argues, “The idea that they’re better than what we had before is a pernicious one. Mayor Daley understands we’re competing on a global level.” 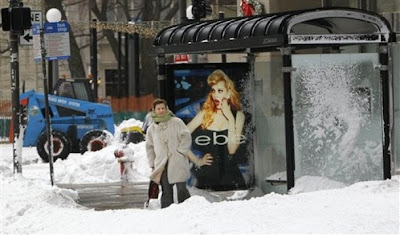 To improve service on public transit, “We need to look into making it more difficult for cars to get into the city,” says Wisniewski. Schlickman proposes turning lanes of the Kennedy into “hot lanes” that would be reserved for buses as well as cars that pay a special toll.

Bey argues that bus rapid transit is an incomplete solution to the city’s transit woes. “If I’m at 120th and Indiana what does that do for me?” Wisniewski replies, “It doesn’t fix the entire system but it would help solve the problem of all our rapid transit being in a hub-and-spokes configuration instead of a grid. We were offered over $100 million in federal funding to test four bus rapid transit routes, but the city didn’t quite get its ducks in a row in time to take advantage.”

Robling calls for combining the CTA with the Pace suburban bus system and the Metra regional rail system and creating a unified fare structure. “We haven’t done this yet because we have nutso cognitive thinking in this city.”

Wisniewski says that improving transit is going to require bold, sometimes unpopular actions from politicians. “Mayor Daley has sometimes been good at making bold decisions like when he carved up Miegs Field to create Northerly Island.”

Lifson reads a question from the audience, “Is it possible to fix transit without fixing neighborhoods?” “Good question,” responds Bey. “Parts of the South Side have been depopulated.” But Schlickman notes that the RTA has studied the possibility of extending the Red Line to the far South Side and has determined that it would be the most worthwhile expansion of the CTA.

Another question form the crowd is, “Any advice for Rahm Emmanuel?” Bey responds, “The mayor of Chicago has to ride the CTA to really experience it. Daley didn’t do this.” Wisniewski says, “I would encourage him to think small and pay attention to details that affect the everyday transit rider’s experience, but also look at the big picture and think about everything that transit can be.”
Posted by John Greenfield at 5:00 PM

Before we make it hard to bring a car into the city, we should make it easy to live near transit in the City. Zoning laws are currently nowhwere near as transit-friendly as they should be, let alone as friendly as they could be if the city was really serious about creating a city for which transit is a good choice.

Create districts that are zoned to accomodate more suburban-style car-oriented lifestyles, but create those districts at least 1/2 mile away from rail lines. Part of the reason we can't do that is we have so many rail lines near expressways. Expressways and rail transit serve different markets, even when they overlap in areas like the Loop.

I would argue that the Red Line extension is only the best extension when the only other options are a Yellow Line or Orange Line extension. A subway under Monroe from the West Loop turning north to Streeterville would have far higher ridership than a 95th extension, but it's no longer even considered. Projections for in about 1970 predicted new ridership equivalent to 25% of current rail ridership, for just a few short miles of subway. If anything those numbers would be higher today:
Distributor Subway

Good points. Chicago definitely has to change its zoning requirements to be less car-friendly and more transit-friendly. Current zoning requirements that require something like one car parking space per unit for new condo construction, and large amounts of parking for other uses like restaurants and entertainment venues, bring more cars into the city, eat up land and make it harder to open a business.