Strange signage on the lakefront path 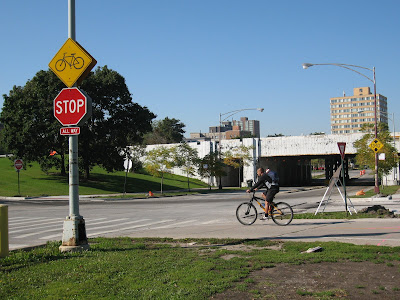 Q: What's up with those signs in Uptown where streets cross the Lakefront Trail? Are cars are supposed to stop for bicycles or are bikes supposed to yield to cars?

A: This unusual signage is at Montrose, Lawrence and Foster, where the path not only intersects these east-west streets but also meets on- and off-ramps from Lake Shore Drive. Street traffic gets stop signs while cyclists and skaters on the trail get yield signs.

According to CDOT spokesman Brian Steele, the path used to cross these streets about 50 feet east of the LSD ramps and there were no signs for either street or trail users at the crossings. Recently the city improved the path at these locations by widening it and adding soft-surface jogging lanes. 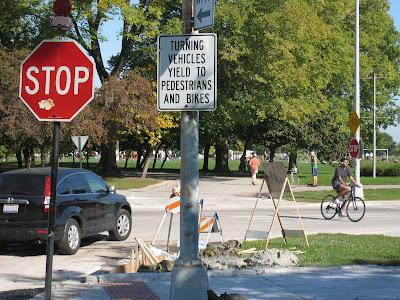 CDOT also opted to bend the trail west towards the ramps, creating curves in the path that encourage bikers and bladers to slow down. The new layout also means cars are already stopped when they encounter trail users. Since there’s usually more traffic on the path than the roadways, non-noxious transportation gets the right of way.

So why the yield signs? Just like on-street yield signs, these direct folks on the path to slow down or stop when necessary, says Steele. “I don’t believe these intersections are confusing to any of the users and they’re certainly a much safer environment than the old configuration.” 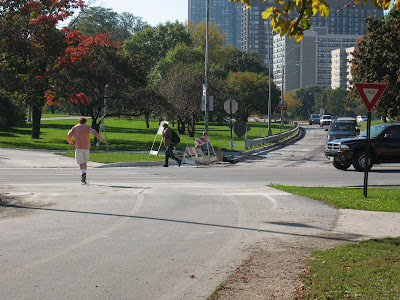 View from the Lakefront Trail at Montrose

Randy Warren from Chicagoland Bicycle Federation disagrees. “These signs are completely inappropriate,” he says. “Bicyclists are being told to yield to stopped traffic.”

Warren thinks the ensuing confusion may be causing crashes. “I got a call from an insurance company after a cyclist got hit,” he says. “It wasn’t clear who had the right of way. The motorist was saying the cyclist was supposed to stop for him. The signs just don’t make sense.”
Posted by John Greenfield at 7:00 AM 11 comments:

Sunday Parkways throws a bash on the boulevards 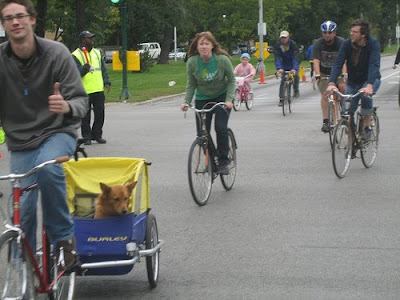 by John Greenfield
[This piece runs in this week's New City magazine.]

Sunday morning and Humboldt Boulevard, usually dominated by speeding metal boxes, is filled instead with smiling faces: tots on trikes, parents with strollers, joggers, bladers and every kind of bicyclist. It’s like a more family-friendly Critical Mass, minus the pissed-off motorists. Are we in some alternate universe?

No, says a green-skinned alien who’s waving to folks as they roll past a temporary skate park that’s been set up for the occasion, hip-hop on the sound system. He’s actually 50-ish Rafael Boria, in costume to promote his son’s skateboard company, but he refuses to break character. “Coming from planet Yuron, I am pleased to see you Earthlings have created this inviting environment,” he monotones. 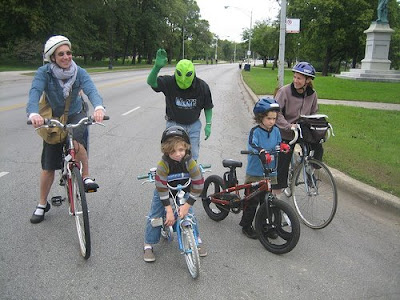 It’s Sunday Parkways, the Chicagoland Bicycle Federation’s scheme to turn roadways into temporary car-free space for healthy recreation, inspired by Bogota, Colombia’s Ciclovia (“Cycle Way” in Spanish) which draws up to two million residents every week to play on a seventy-mile street network.

The bike federation is staging two three-and-a-half-mile pilots of the program along Chicago’s boulevard system this month: last week’s North Side route which winds from Logan Square’s Centennial Monument to Garfield Park; and another test on October 26, from Garfield Park to 24th and California in Little Village. The federation organized and paid for these events but hopes to persuade Mayor Daley, an outspoken cycling advocate, to fund and expand Sunday Parkways next year. 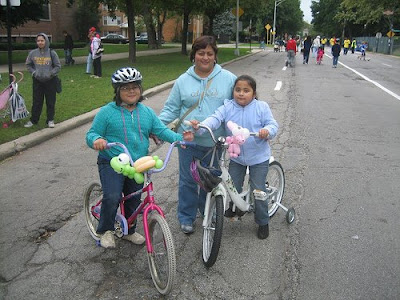 Just south of the eagle-topped monument in Logan Square, Armitage Baptist Church has set up a makeshift café, handing out free java to fuel the cyclists. A few blocks down the route an “activity station” at Palmer Square Park hosts aerobics, yoga and fencing demos. “This is a great opportunity to meet your neighbors,” says Gloria Alcala, watching with her daughters Viviana, 9, and Valeria, 7, who have balloon animals tied to the front of their two-wheelers. 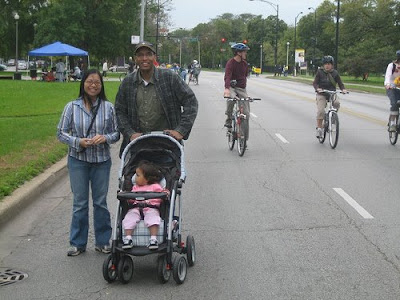 Marcus and Juvy Radford push their daughter Zoe, 2, past the Humboldt Park boathouse, where salsa dancing, a steel drum concert and capoeira, a Brazilian martial art that combines combat with music and dance, take place. “I think we should have this more often—and later in the day,” says the drowsy mom. A Henry Rollins lookalike pedals by, carrying a female friend in the front cargo hold of his Dutch work bike. 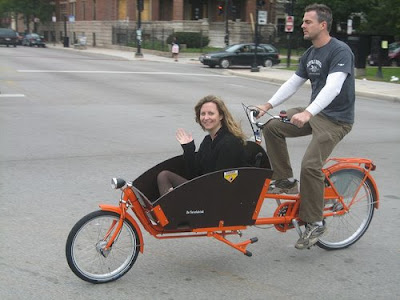 At the south end of the route in Garfield Park, at a live taping of the local TV show “Chic-A-Go-Go,” hostess Miss Mia and her puppet sidekick Ratso are leading a crowd of kids and their parents in line dances like the Cuban Shuffle, the Soulja Boy and the Cha-Cha Slide. They’re swarmed by a flock of Canada geese and Park says, “We’re trying to get geese to dance with us.”

At 1pm, just before rain sets in, city workers start moving traffic cones and barricades to open the streets to motorized traffic. “Oh, they’re letting the cars back in,” says a hipster. “Yeah,” replies a senior. “That sucks.”
Posted by John Greenfield at 4:00 AM 7 comments: 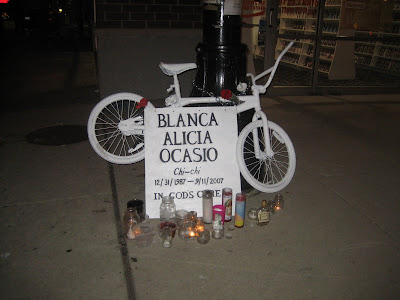 Her loved ones then walked with lit prayer candles to the crash site, followed by dozens of cyclists walking their vehicles. After the white bike was chained to a light pole, mourners added candles and flowers. Chicago Ghost Bikes’ Howard Kaplan hoped the event provides closure for Ocasio’s family, adding “They probably feel they’re a little less alone with their loss.”
Posted by John Greenfield at 3:00 AM 6 comments: