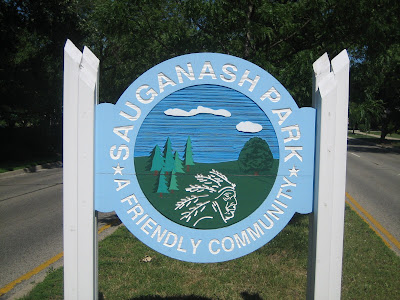 The Sauganash Trail is short and sweet. This new rails-to-trails, AKA the Valley Line Trail, officially opened June 21 in the Sauganash community on Chicago’s Northwest Side. It’s only one mile long, running from Bryn Mawr to Devon near Kostner, and after you check it out once it may be years until you ride it again. It’s basically a road to nowhere, terminating abruptly at busy Devon, a mile from any recommended bike routes.

But it’s a delightful little path, extremely well designed and executed and it’s already getting great use by locals. If you lived nearby you’d probably find yourself using it several times a week for accessing Bryn Mawr to pedal downtown, for strolling, walking your dog, jogging or helping your kids travel safely around the neighborhood.

The trail is located on an old railroad embankment now owned by ComEd and the City of Chicago is leasing the right-of-way for a dollar a year, says Maria Castaneda, spokeswoman for the Chicago Department of Transportation, which helped plan and build the project. It’s the city’s third rails-to-trails after the Burnham Greenway and the Major Taylor Trail on the Southeast and Southwest Sides, respectively. The Bloomingdale Trail is currently in the works for the Near Northwest Side.

The biggest challenge of building the path was replacing old railroad structures at Rogers and at Peterson with bike-ped bridges, says Castaneda. Since this work involved disrupting the traffic below the bridges it was done during off-peak hours. 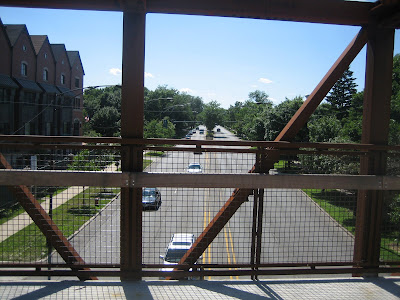 View from the bridge over Peterson

“People in the neighborhood love the trail,” says Pat Malloy, assistant to Ald. Margaret Laurino (39th). “Some people have said they were skeptical at first – they were worried about kids hanging out there causing problems. But actually this seems to improve the situation from when it was an abandoned rail line. Now any time of day you’ve got people walking, skating and biking, so troublemakers have to worry about being seen by their neighbors.”

Malloy says another big perk is that kids who live on the north side of the community no longer have to cross four-lane Peterson to get to activities at Sauganash Park. Now they can get up on the trail via a dandy access ramp at Thome, ride or walk over Peterson and exit via the off-ramp at Rogers, just south of the park. 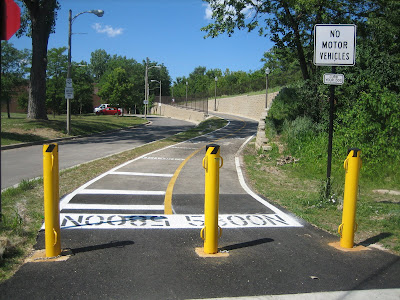 The path may eventually link up with other greenways, says Malloy. The suburb of Lincolnwood is looking into extending the trail north from Devon while the Cook County Forest Preserve District hopes to build a path through the LaBagh Woods along the Chicago River, connecting the south end of the Sauganash Trail to the North Branch Trail.

Last Wednesday I encountered cyclists Paula Getman and Mike Kenny at the southern end of the new path. They had discovered it by accident as they followed the signed route to the North Branch Trail and had just taken a quick spin up and down the Sauganash. “The surface is great and I love the little exit ramps,” said Kenny. “This is a great way to cross Peterson, that’s for damn sure,” sais Getman. 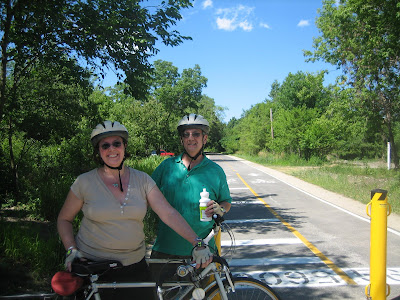 “This is a little strip with great potential,” she added. “It’s like the little bits of riverwalk along the Chicago River – they’re great as long as they last and hopefully they’ll all connect some day.”

The path was in fact smooth as glass and free so far of the gang graffiti that constantly has to be painted out on the Burnham Greenway and the broken glass that plagues the Major Taylor Trail. Inside the pleasant green tunnel with a soundtrack of chirping robins it’s easy to imagine you’re no longer in a city of three million.

At Devon, a sign in the median portrays Sauganash, “The Englishman,” a Potowatami chief born Billy Caldwell to a Wyandot Indian mother and an Irish father and educated by the Jesuits at Fort Detroit. Sauganash settled in Chicago in 1820 and was elected as a judge a few years later, eventually controlling a 1,200 acre tract of land at the current site of the neighborhood. But in 1836 he sold most of his land and relocated to Iowa join his tribesmen who had been forced west by the federal government.

As I returned south I met Bob Gorman, a local, and Michael Wacker, visiting from Lake Geneva, WI, who said they were out for a stroll and to discuss business. “I like that they replaced the old tracks,” said Gorman. “They were a gathering place for troubled youth." Wacker says he grew up nearby, “So there’s a nostalgic element for me.” 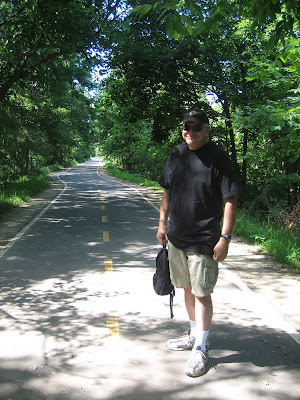 Passing by Sauganash Park, I saw a couple of young moms taking full advantage of the new trail’s potential for car-free intra-neighborhood travel. Having picked up their young kids from day camp, they were also pushing toddlers in strollers while walking the family dogs along the bike path. 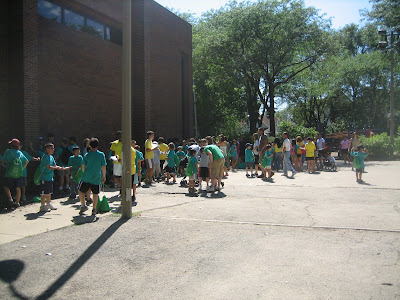 Day campers at Sauganash Park
Posted by John Greenfield at 10:26 AM 5 comments: