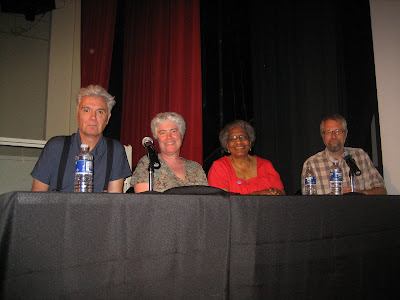 [This piece also appears in this week's Newcity, www.newcity.com.]

It’s the last day of Bike to Work week but gale-force winds and buckets of rain make the evening commute feel like life during wartime. Still, a crowd has pedaled to the Chicago Cultural Center to hear ex-Talking Head David Byrne discuss cycling at the forum Cities, Bicycles and the Future of Getting Around.

The lanky singer’s recent work to push pedaling includes championing New York’s Summer Streets “ciclovia,” which shuts down roadways to cars to create safe space for non-motorized play; designing artistic bike racks; and his new book the The Bicycle Diaries, reflections on his two-wheeled explorations of cities all over the world. 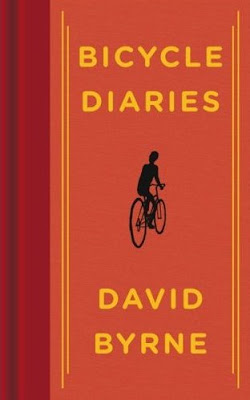 Local green transportation bigwigs have joined him for the Chicago stop on his national speaking tour. Luann Hamilton heads the Chicago Department of Transportation division responsible for promoting cycling. Jacky Grimshaw represents the Center for Neighborhood Technology, working for eco-friendly development and transit. And Randy Neufeld, co-founder of Active Transportation Alliance, now serves as director of the SRAM Cycling fund, which is donating millions to encourage cycling worldwide.

At 58, Byrne is soft-spoken and dignified with a shock of silver hair, a far-cry from his hyperactive, uber-nerdy stage persona in his band’s 1984 concert movie, “Stop Making Sense.” Noting that he often stays in hotels while touring, the singer shows a slide of typical view of auto-centric development from a hotel window: highways, garages and parking lots. “It’s really depressing,” he says. “There’s no life there whatsoever.”

But Byrne’s optimistic that civilization is doing a U-turn these days, evidenced by vibrant street life in Ferrari, Italy. “Everybody bikes there,” he says. “Old, young, grandmas and fashion models.” He discusses the ciclovia, concept, popular in Latin America for years, now gaining ground in U.S. cities.

The singer shows various bicycle parking facilities from around the world, like a crazy tower of bikes in Shanghai and bike racks installed in car parking spaces in Portland, OR. “The bike station in Millennium Park is pretty impressive,” he says. “You can shower there. You can even shower with you bike if you feel really close to your bike.”

Hamilton outlines the City’s efforts to promote cycling, including $100 million spent on bike facilities and programs since the early ‘90s. “We’ve met a lot of our goals but we’ve still got a long way to go,” she says.

The audience cheers when Hamilton announces the City will be testing automated bicycle rental, a system that’s wildly popular in Paris, with 20,000 rental bikes. Chicago’s program will start small, with 100 bikes at six downtown locations.

Grimshaw says Chicago’s widespread train and bus lines and bike- and ped-friendly street grid make it easy to get around town without a car. She scorns expressways as “the sewer pipes of our transportation system.” 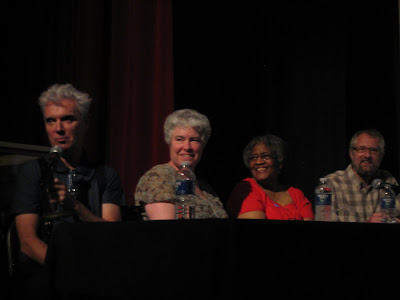 “Bicycling in Chicago has certainly succeeded as far the ‘brave hipster’ demographic is concerned,” says Neufeld. “But making streets safe for kids of eight and seniors of eighty should be the goal for urban cycling infrastructure.”

He lists ten ideas for improving cycling, including schemes to slow down cars; bike lanes that are separated from auto traffic by barriers; and closing a major street to cars on a regular basis, ala New York’s Broadway. Showing a slide of 35th Ward alderman Rey Colon in less-than-stylish bike garb, Neufeld says, “Talk to your alderman about bicycling – and better fashion.”

An audience member asks if cycling has inspired any music from Byrne. “Not exactly,” the singer responds. “But it is like performing one of those quasi-mindless tasks like driving or doing dishes. You find that all of the sudden, from who knows where, you have a solution to a problem that had seemed unsolvable.”

Asked whether he’s optimistic that American troglodytes can be coaxed out of their dens and onto bicycles, Byrne says, “In New York cycling is not as un-cool as it used to be. People realize they can go out to dinner and a show on a bike, and business owners are realizing that bikes are good for business. I think we’ve reached a tipping point.”
Posted by John Greenfield at 2:00 PM

"The lanky singer’s recent work to push pedaling"--really? Too clever by half. And who cares if he's "lanky"?

I also like to include physical descriptions of the people I'm talking about now and then, but I suppose everybody already knows Byrne is tall and thin.

Too clever by half. And who cares if he's "lanky"?

but I suppose everybody already knows Byrne is tall and thin.