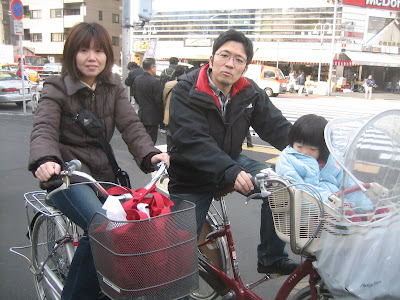 [A version of this article also runs in the current Momentum magazine, www.momentumplanet.com.]

Biking in Tokyo is not as bad as you’d think. Yes, it’s an extremely hectic, densely packed place - the metro area being roughly the population of California squeezed into the area of Hawaii. But when I visited this winter I found the world’s most populous mega-city to be a surprisingly comfortable and friendly place to pedal.

The Tokyo transportation mix includes lots of everything. Sure, the streets are clogged with cars, but there’s also a terrific metro system that’s ubiquitous, fast, clean and gaijin (“foreigner”) – friendly with signage and announcements in English as well as Japanese. And when the simultaneous four-way “pedestrian scramble” walk signals activate next to busy Shibuya Station, the resulting swarm would warm the heart of any ped planner.

There’s also tons of Jitensha (“bicycles”), evidenced by vast bike lots at suburban train stations, Kasai Station’s Cycle Tree, an automated underground parking system with space for 6,480 vehicles, and the dozen or so bicycles parked curbside on every other block. Thanks to the city’s low theft rate, most people simply put down the kickstand and free-lock. 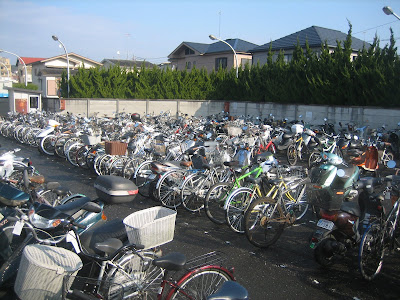 Mama-chari (“Mama bikes”) rule the streets, or rather sidewalks, of Tokyo. These sensible commuter cycles are usually one- or three-speeds, fully accessorized and often equipped with a shopping basket in front and a child seat in back. In the temperate winter weather, young adults on mama-chari [this is the plural form] sporting smart Anglophile fashions – men in Burberry jackets, slacks and scarves, women in peacoats, skirts and knee-high boots – are a common sight.

Wanting to get in on the action, I hired a 6-speed cruiser for $9 US a day from Tokyo Rent A Bike, near Nakameguro Station. It’s generally legal to ride on the wide sidewalks, and this is where you see most cyclists rolling at slow speeds. But I found slaloming around pedestrians to be stressful, so I soon took to the streets.

Cars drive on the left side of the road in Japan and, recalling a UK vacation where my dad destroyed several mailboxes while learning to drive on the left, I worried I’d make a deadly mistake. But bicycling in the street felt surprisingly safe, the main difference being left turns were now easier to execute than right turns. And motorists drove at moderate speeds and with courtesy – I heard almost no horns.

Navigation was the biggest challenge since there’s no grid, many streets are unnamed, and buildings are identified by seemingly random block numbers rather than street addresses. Using a street atlas, I located a few of the many bike stores recommended by friends from Chicago. They came to Tokyo in September for the Cycle Messenger World Championships, which drew hundreds of couriers from around the globe. 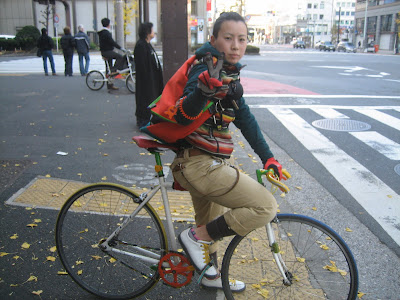 A few blocks north of Shibuya Station, W-BASE and Carnival occupy the first and second floors of the same building. These tiny shops can build the custom track bike of your dreams. W-BASE is especially densely packed with flashy frames and parts, including BMX gear. When I visited, a cluster of polo mallets leaned against a wall and a sphere of old inner tubers sat on the floor like a huge ball of yarn.

Manager Yohei Hanazawa helped organize the messenger championships here. Besides the usual checkpoint races simulating courier work, the champs featured track competitions on the Keiokaku Velodrome, home to the famous Keirin sprints and located near Keio-Tamagawa Station. “The messenger championships were awesome,” Hanazawa said. “I’ve gone to other cities for the championships and this time the world came to Tokyo. It was a great party – I didn’t sleep for a week.”

My most memorable Tokyo bike experience was joining the Half-Fast Cycling club on a cruise from the Roppongi district to Odaiba, a man-made island in Tokyo Harbor with a replica of the Statue of Liberty, an onsen (“hot spring”) in a phony Edo-era village, and a giant robot sculpture. 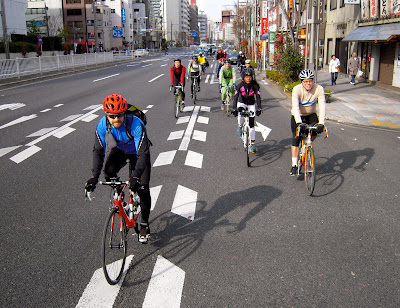 Ride leader Mike Sims-Williams, a Brit, insisted the raison d’etre of the club is getting together to drink beer. “We’re not about efficiency, we’re about camaraderie,” he says. “People ask why we cycle from one beer vending machine to another. It’s because it’s faster than walking.”

We spun for about ten miles down broad boulevards, through narrow, old-timey lanes and over bridges to the island, where we stopped for drinks at an outdoor café with palm trees and reggae music. Sipping a Kirin, Kanako Maeda, said she’s enjoyed the moderate speeds and friendly vibes on Half-Fast rides – with one exception. “Once, a woman stopped suddenly in front of me and when I hit my brakes a big man flipped over me,” she said. “He ran over my back but I wasn’t hurt too badly.” 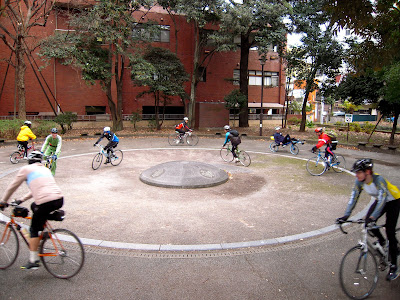 On the way home we stopped at a park and did spontaneous laps around a circular fountain – bikes on the outside riding clockwise, bikes on the inside riding counter-clockwise. It was a good metaphor for cycling in Tokyo: chaos, orchestrated.

I also have blog called cycle Tokyo and belong to half-first. I have to admit that your blog has better pictures and stories than mine. Keep good work N enjoy your cycling in Tokyo. Cycletokyo/blogspot.com
Heidi

I was reading about "I'm just walking" when I found your blog. I'm so glad you were able to come to Tokyo to cycle. I live and teach English a few hours north of Tokyo. I recently bought a bike and have made it my designated work transportation. It's only 5 miles a day but I've had so many people try and convince me to drive because of rainy season, hot summers, and cold winters. But I get so much joy out of the ride, (especially seeing white cranes in the rice fields) I know now I could never stop and I want to include cycling in my daily routine and travels from now on.

Anyway you may already know this but just some comments from reading your story. Addresses in Japan are by neighborhood. Its been that way for a looooong time. Unless its an emergency people really only ever honk their car horns (really lightly) to say thank you. Major difference from New York! They make specially designed (stretchy and ventilated) suits and clothing for work that is biker and pedestrian friendly because so many business people walk to work. They even have "cool biz", the type of breathable clothing worn in the summer so businesses don't have to crank up the A/C.

Ever since moving to Japan, I've had a better appreciation of America. I've been dying to take a long road trip when I get home. Maybe I'll decide to bike it! Definitely going to read more of you blog! Thanks!

Good info. But The "Statue of Liberty" in Odaiba isn't a replica of the American one. It was also a gift from the French.

I'm so glad you were able to come to Tokyo to cycle.

Maybe I'll decide to bike it! Definitely going to read more of you blog! Thanks!r

London escorts directory London Crumpet is created to expose Independent escorts and escort agencies in London. Everybody can post their advert on this directory for FREE.

Hi….
Friends I am Kapil Singh From India . independent Jaipur Escorts is the leading escorts Services Provider by internet. I am very happy using This service.

carbon wheel rental
Excellent blog you’ve got here. It’s difficult to find high-quality writing like yours nowadays. I really appreciate individuals like you! Take care!! You can visit my site.
wheel hire

I have found this article written in a very wonderful way. I liked it very much and thanks for sharing it here.