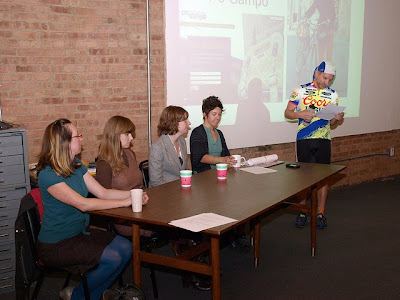 It’s a balmy November Tuesday evening and about 25 cyclists, dressed in either smart street clothes or garish Lycra bike gear, have packed the conference room at Active Transportation Alliance’s downtown offices. They’re here for the Bike Fashion Panel, sponsored by the Chicago Cycling Club, an exploration of how to get around the city on two wheels without sacrificing your personal style, with a focus on women’s fashion.

The panel includes a who’s who of movers and shakers promoting chic cycling in Chicago. Emily Taylor and Maria Bousted from PoCampo (pocampo.com), design and market stylish, waterproof handlebar and rack bags and other accessories for female cyclists. Dottie Brackett, co-author of the blog Lets Go Ride A Bike (letsgorideabike.com) writes about her daily biking and fashion adventures and provides tips and product reviews. Alexis Finch produces and does photo styling for the Thought You Knew pin-up calendars (thoughtyouknew.us) which raise money for the Chicago Women’s Health Center. 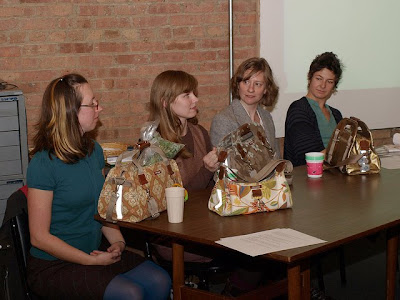 Moderator Steve Kramer, a former president of the Chicago Cycling Club, is wearing a gaudy Coors Light / Ford cycling jersey, Spandex shorts, Sponge Bob socks, racing shoes and a doo-rag. “When they asked me to lead this discussion I figured I already know about bike fashion,” he says. “It’s all about Lycra and bright-colored jackets that keep the wind off you, right? My personal bike style can be summed up in four syllables: Po-ly-es-ter.” 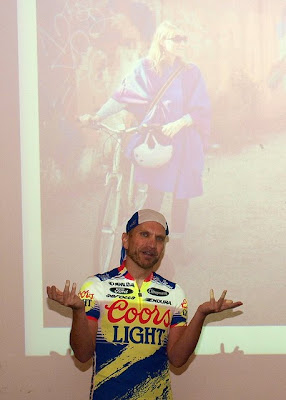 He asks the panelists to define “bike fashion” and all four women give similar answers to Taylor. “Bike fashion is about being able to live my life as I would otherwise and still be able to get around on my bike,” she says.

Asked if she does any recreational cycling outside of commuting, Bousted answers, “For me it’s mostly commuting, sometimes a ride on the lakefront path, but I have done a little bit of touring, so I do own some Spandex shorts.” Brackett, who usually commutes on a 50-pound Dutch city bike, says, “Sometimes when I’m out on the Lakefront Path and I’ve got a good tailwind I think I should race, that I’d probably be pretty good, but I guess that’s all in my head.”

On choosing clothes for riding, Taylor says, “I bike in just about any shoe except shiny ones I don’t want to scuff. High heels actually work better for cycling than walking because you’re only using the balls of your feet.” Finch is the only panelist who regularly rides in bike shoes, citing her need for speed. “I want to be the first one off the line at the green light,” she says. Instead, she keeps a pile of dress shoes under her desk at work to change into.

If you’re going to bike in your work clothes, the panelists recommend wearing quick-drying clothes that don’t rumple easily. “When I visited Costa Rica, I noticed that people don’t hide out from the rain but instead they wear fabrics that dry really quickly so that 15 minutes later they’re dry,” says Taylor.

While men’s street clothing is usually a bit easier to bike in than women’s dresses and skirts, Finch says during the winter women have an edge because they can get away with biking in a skirt and tights and wear it to the office rather than having to change into a suit when they arrive. “This is one place where we have a little bit of a ‘presto change-o’ advantage over the guys,” she says.”

The women agree that their bikes are their favorite fashion accessories. Taylor rides a mixte she had custom powder-coated, with upright bars, cork handle grips, a rack, fenders and a sprung Brooks leather saddle. Brackett’s Oma bike from Dutch Bikes Chicago includes a fully-enclosed chain and brakes, skirt guard and integrated generator lights, making it a low-maintenance, weatherproof ride, but its heavy weight means it’s not suitable for a third-floor walk-up or triathlon racing.

Bousted says when she had drop bars on her road bike she used to be careful not to wear scoop-neck tops. “I didn’t want people to be able to look down my shirt,” she says. “That never happens – that’s a myth,” says Kramer. Upright bars have solved that problem. Finch had her fixed-gear road bike powder-coated six different colors at UV Metal Arts in Bridgeport and she plans to get the frame drilled for a rear rack at Blue City Cycles, also located in Bridgeport. 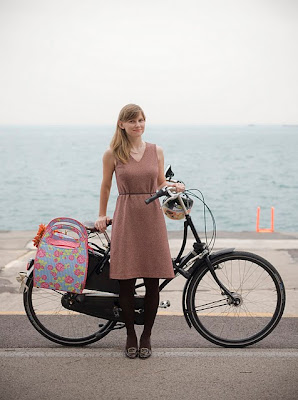 Next Kramer screens some images from Martha Williams’ Chicago cycle chic photography blog Bike Fancy (bikefancy.com) and asks the panelists for their impression. In one picture Bracket stands with her ride by the lake with bright-colored, floral-print Basil panniers from Copenhagen Cyclery, “I’m in heels and I’m wearing an A-frame dress,” she says. “It’s not constricting but it won’t fly up, and it’s wool, which is nice in case it gets chilly.” Finch says, “Guys are always flummoxed to see women riding in high heels. They say, ‘How are you going to ride in those? You’re going to die.’”

Another image shows another woman on an Oma wearing a black-and-white hound’s-tooth jacket. “I love that she’s wearing tight pants and knee-high boots,” says Finch. “If you bike you’re going to have great legs so you might as well show them off.” Taylor says, “The sprung saddle is nice for some extra comfort when you’re not wearing performance clothing.” 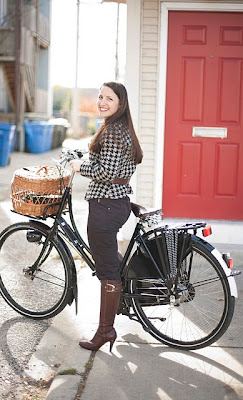 A photo of a guy in a suit racing by a CTA bus on a fixie is about the only reference to men’s cycling fashion during the forum. “If you’re going to ride in a suit it’s nice not to be too hunched over,” says Bracket. “It’s a good idea to tuck your tie in and have a chain guard on your bike.”

Asked if they ever shop for bike-specific attire, the women recommend a number of clothing and gear companies. Finch likes bike-friendly Nau jackets from Portland, featuring long sleeves and a long back, “to avoid the dreaded cold spot,” she says. Ryoko arm warmers, Sheila Moon knickers, Nutcase helmets and Chicago-made Kozie Prery cycling caps also get a shout-out. But Brackett says she buys most of her elegant, bike-able clothing at thrift stores. 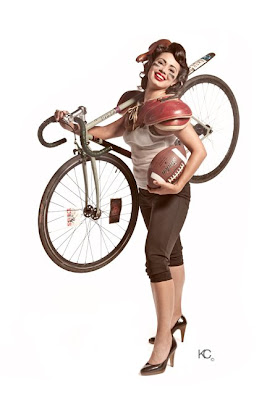 At the end of the session, Brackett announces the Autumn Cocktail Cruise Let’s Go Ride a Bike is co-hosting with this blog, on Sunday, November 13, leaving from the Wicker Park Fountain, 1425 N. Damen, at 3 pm. Finch announces the Thought You Knew Calendar launch party, Friday November 19, 5-10 pm at the Coop, 845 W. Fulton. She also puts in a plug for an appearance by the women of Thought You Knew on Thursday, November 11, from 6:30-7:30 pm at the Craftsman Experience workshop, 233 W. Huron. “Google ‘Craftsman’ and ‘pin-ups’ and you’ll find it,” she says.
Posted by John Greenfield at 12:00 PM

BlueHost is definitely one of the best web-hosting provider with plans for any hosting needs.

The ideal electric bike for youngsters and grown-ups, e bikes under 500 2022 is a foldable electric bike that pushes your limits. Although, it gives you the added incentive to venture out into nature. At the point when you request this electric bike, you do not just set aside cash as this is an entirely reasonable bike to purchase.