Is Kinzie Street on the right (cycle) track? 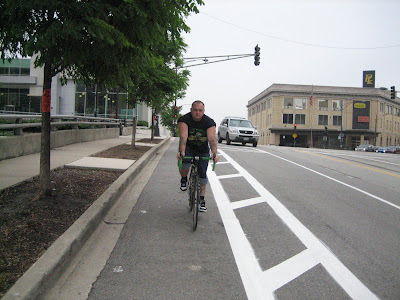 Chicagoans sound off about the city's first car-separated bike lanes

Richard M. Daley had a widespread, if somewhat undeserved, reputation as a bicycle-friendly mayor. But with Rahm Emanuel in power, along with progressive new transportation commissioner Gabe Klein, it looks like there’s going to be a sea change in the way the city pushes pedaling.

The mayor’s bike proposal, obviously influenced by transition team member Randy Neufeld, former director of the Chicagoland Bicycle Federation, calls for expanding our anemic automated public bike sharing system from only 100 cycles to thousands of vehicles. The mayor also promises to build the Bloomingdale Trail, a 2.65-mile elevated rails-to-trails conversion on the Northwest Side within his first term, although it’s taken two years just to get the design contract approved and the price tag for the trail is estimated at $50-70 million.

The third goal may be the least realistic but most exciting, and there’s already rubber, nay bike lane paint, on the road. Rahm has pledged to install 100 miles of European-style “cycle tracks,” bike lanes that are physically separated from cars by medians, parked cars and/or posts, within his first four years in office. This would require a lot more money than is currently spent on striping eight miles of conventional bike lanes per year, and it would involve taking away travel lanes and parking spaces from automobiles.

Many bicycle advocates argue that separated bike lanes are the missing link for getting large numbers of people on bikes in North America. By removing some of the dangers of speeding motor traffic and opening car doors, cycle tracks take away the fear factor that prevents average Chicagoans from trying transportation cycling. Separated bike lanes have debuted with much fanfare in Portland, OR, New York and Washington, D.C.

However, cycle tracks can be problematic if they’re not done right. European cities with successful separated bikeway networks like Amsterdam and Copenhagen generally use special bicycle traffic lights to prevent collisions between right-turning cars and bikes emerging from the cycle track to cross an intersection. There will be no such lights on Kinzie, only signs warning turning motorists to stop for bikes and pedestrians. 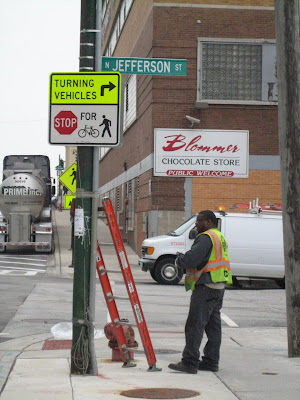 People love to walk in cycle tracks, and garbage, broken glass and snow will accumulate in the separated lanes unless the city is careful to maintain them. Faster bicyclists may prefer to ride in the regular travel lane, but local laws require cyclists to use separate bike paths when available. As a result, those pedaling outside of the cycle track may be unable to successfully sue if a reckless motorist hits them.

Nonetheless Chicago cyclists, including this one, are getting excited about the cycle track that the Chicago Department of Transportation is currently installing on Kinzie Street between Milwaukee Avenue and Wells Street, connecting two of the city’s best-used bike lane streets. In general, the new separated lanes will be located next to the curb, to the right of the parking lane, and separated from parked cars by a diagonally striped buffer zone and flexible posts. 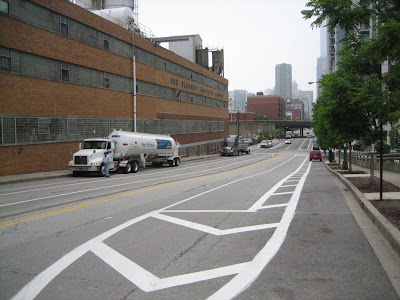 Though recent rains have delayed the project, the cycle track should be finished by the end of next week. Emanuel is sure to boast about it during his first speech at the Bike to Work Week rally next Friday, June 17, 7:30 – 9:30 am at Daley Plaza.

Last Friday afternoon I stopped by Kinzie to check out the work in progress. The sky was leaden but the air was perfumed by the Blommer Chocolate factory at the five-way intersection of Kinzie, Milwaukee and Desplaines.

I was pleasantly surprised to see that the new lanes on Kinzie continue as dashed lines across every intersection between Milwaukee and Wells. Plus, at the five-way a new “bike box” waiting area and a curving, dashed lane across the intersection will make it much easier for southbound cyclists on Milwaukee to make a left turn onto Kinzie. 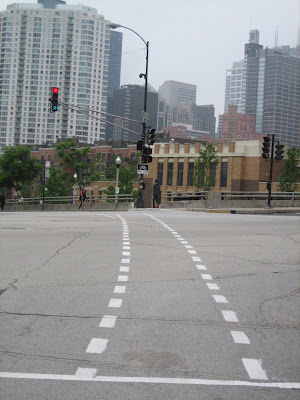 Right now cars are still parking next to the curbs in the cycle track instead of the new parking lane, but this will stop after the posts are installed and bike symbols are marked on the bike lanes.

I flagged down a few bike commuters to get their reactions to the new cycle track. Abigail Jasper, riding a Trek hybrid, says she’s excited about the separated lanes. “They’re going to protect bicyclists from drivers who may be too busy doing other things to pay attention to cyclists,” she says. She notes that it may take a little while for motorists and bike riders to get used to the new lanes. “There’s going to be a learning curve but we’ll figure it out.” 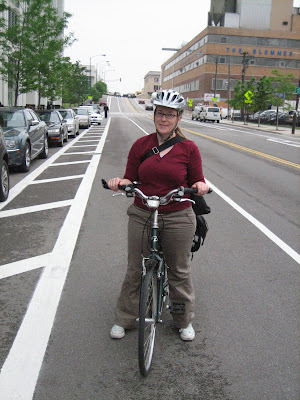 Scott Lambert, on a Masi single-speed road bike, is looking forward to protection from cars. “It’s great that the city is doing something for bikers,” he says. “I’ve been hit more than twelve times.” However he’s skeptical that the current cycle track layout is going to function well. “I’m not sure what’s going to happen at the intersections. This is a great idea in theory but they’re probably going to have to modify the design before it becomes sufficient.”

Newby bike commuter Patrick Crokin, pedaling a Giant mountain bike, is glad the new lanes will eliminate the risk of bicyclists getting hit by opening car doors. “This is really a great idea,” he says. “I’m just curious to see how they’re going to pay for all the new lanes.”

When I duck into the Blommer factory’s chocolate shop next to the five-way intersection, manager Kevin Schultz tells me the cycle track is pointless. “They should be spending money to improve the traffic and pedestrian flow here instead of wasting money on these bike lanes,” he says. “This is one of the worst intersections in the city. We stand here all day and watch people almost get hit when they cross Desplaines to the Jewel.” He says the city should instead be spending money for a turn signal to keep westbound vehicles turning left from Kinzie to Desplaines from hitting these pedestrians. “One of these days some lady with a kid or someone walking their dog is going to get killed.” 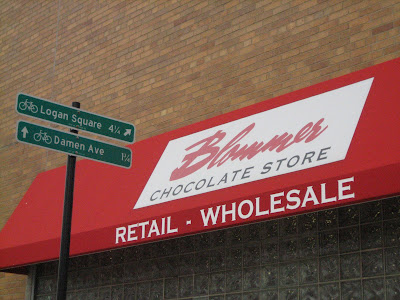 But Michael Bordenaro, waiting for the traffic light outside Blommer on his Raleigh mountain bike, thinks the city’s plan for 25 miles of cycle tracks per year is too conservative. “Citizens should go out with white paint and stripe 25 miles of bike lanes themselves this weekend and say, ‘Mayor Emanuel, thank you for your leadership. Now keep up with us.” 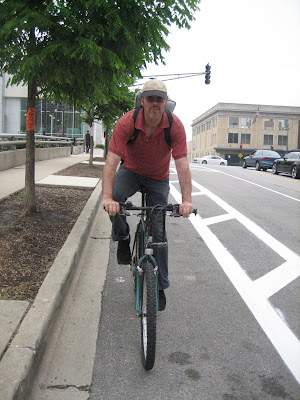 Posted by John Greenfield at 7:33 AM

I don't know how this rumor ever got started. Randy neufeld will tell you himself that he is not the founder of CBF. He came in a few years after its founding as the first director.

Good point Greg; I'll tweak that in the text. Randy was the federation's first executive director, but it existed before he came on board.

Actually, separated signals between right-turning motor vehicles and cyclists is quite rare in Copenhagen. I only remember encountering about 3 or 4 intersections like that out of the many, many dozens I rode through last August. But of course the drivers there are way more used to cyclists due to the high numbers and also the drivers education. Many of the bike traffic lights are there simply to give cyclists a few seconds head start over the cars or to turn left at a t-junction for instance. I've read that this separation of signal phases is becoming the norm in Holland however.

Get professional trading signals sent to your mobile phone daily.

Thanks for Your article..it gives us immense knowledge.Body massage gives you ultimate relief to your body.i would like to recommend each and everyone go for massage once in a week for ultimate relief. it will not only gives you relief but also increase your productivity.

call girls near me

Totally cool.
I have a Specialized mtn bike
which I use for gettn 2 'work'.
HeeHee
GBY

it is a free website links detail here you can get such an information know the above features regarded them kindly see the blog, therefore lots of things to be considered kindly see it.
Free Blog

Coordinated figures upheld by strong wellbeing makes our Delhi Escorts amazing bed accomplices. They are fit for having intercourse for long meetings without tiring. Various situations in affection making could be given a shot with no difficulties. Indeed, Yashi Gupta women are superb sweethearts and would perform sex according to your craving. They are such specialists, that they could revive your stifled cravings of lovemaking

I wanted to thank you for this excellent read!! I definitely loved every little bit of it. I have you bookmarked your site to check out the new stuff you post.

I can see that you are an expert at your field! I am launching a website soon, and your information will be very useful for me.. Thanks for all your help and wishing you all the success in your business 대딸방

Your blog is so amazing. Information is very useful for everyone. such a amazing post please keep posting.

In the Pink City, you feel the longing for human companionship, for a beautiful lady on your arm every time you go to a party, or even somebody to spend a night with you and let you grasp the pleasures that often lie just a little out of our reach. Esc0rts service Jaipur

I do agree with all of the ideas you’ve presented in your post.
바카라사이트

I've been searching for hours on this topic and finally found your post. 슬롯사이트 , I have read your post and I am very impressed. We prefer your opinion and will visit this site frequently to refer to your opinion. When would you like to visit my site?

I finally found what I was looking for! I'm so happy. 안전한놀이터 Your article is what I've been looking for for a long time. I'm happy to find you like this. Could you visit my website if you have time? I'm sure you'll find a post of interest that you'll find interesting.

I’m impressed, I have to admit. Truly rarely should i encounter a blog that’s both educative and entertaining, and without a doubt, you’ve hit the nail within the head. Your notion is outstanding; the pain is an issue that insufficient everyone is speaking intelligently about. I am very happy that we stumbled across this inside my try to find some thing relating to this. 메이저토토추천

Youre so right. Im there with you. Your weblog is definitely worth a read if anyone comes throughout it. Im lucky I did because now Ive received a whole new view of this. 먹튀검증사이트

It's the same topic , but I was quite surprised to see the opinions I didn't think of. My blog also has articles on these topics, so I look forward to your visit. safetoto