What's with the bluish lighting on CTA buses? 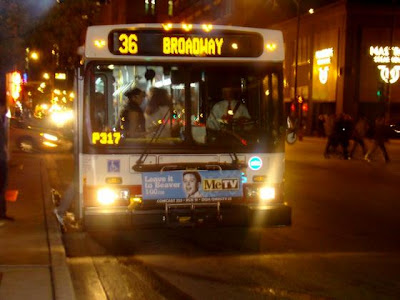 [This article also runs in Time Out Chicago magazine, www.timeoutchicago.com.]

Q: What’s up with the weird blue lighting inside CTA buses in the past year or so (and now in some CTA train cars as well)? It looks like if you took some dirty combs in there, they’d come out clean! — Joe Bogdan

A: That bluish glow inside some buses and trains comes from new LED lighting that has replaced fluorescent bulbs, according to CTA spokeswoman Wanda Taylor.

In fall 2009, the agency added 58 articulated hybrid buses, bankrolled by federal stimulus money. The new vehicles are less polluting, quieter and a smoother ride than conventional buses, and the new LEDs on these vehicles are a greener, lower-maintenance choice since there are no bulbs to change, Taylor says.

This year the agency has also been testing interior LED lighting on its rail system, although the higher cost of the LEDs and difficulty keeping a steady voltage on the trains may prevent them from changing the lighting system-wide.

The CTA is also considering adding color-coded LEDs on the outsides of train cars, Taylor says, so that when you’re standing on, say, the Fullerton platform it will be obvious whether a particular train serves the Red, Brown or Purple Line.
Posted by John Greenfield at 8:54 AM

In the last five years of the scheduled program, students have begun 27 companies. Several of those have even launched top 10 video baby monitors, like this past year's winning project.