Going Dutch at the ThinkBike symposium 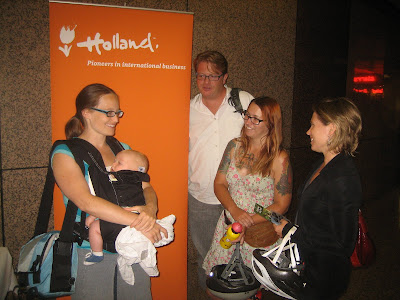 On a balmy Wednesday morning, bike racks outside the Thompson Center are clogged with cycles. The drum-shaped building is nicknamed the “Tom Tom” by messengers who chill in the plaza while waiting for work. But today a cleaner-cut crowd has pedaled here in suits and skirts for the ThinkBike symposium, “a Dutch boost to Chicago’s bike-ability.” Naturally, the collection of cycles includes elegant Dutch city bikes and hardworking bakfiets (“box bike”) cargo vehicles.

The workshops, sponsored by the Dutch Consulate General and Active Transportation Alliance, bring bike transportation specialists from the Netherlands together with their Chicago counterparts to brainstorm ways to make our city the Amsterdam of the Midwest. Rather than legalizing pot and prostitution, the goal is to bump our city’s measly one-percent bicycle mode share closer to the utopian standards of Holland, where 27 percent of all trips are made on two wheels, and there are more cycles than citizens.

The visitors from the Netherlands are stylishly dressed in sports jackets and Beatle boots, and most of them are freakishly tall. In the afternoon these flying Dutchmen will pedal their fietsen around town with local politicians, transportation planners and bike advocates, discussing ways to create safer, more appealing streets for cycling. 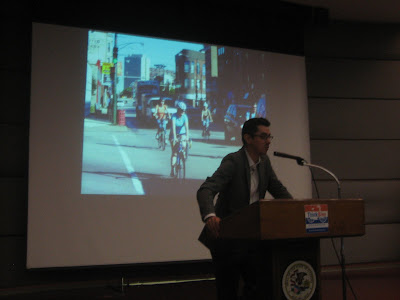 Emcee Geoffrey Baer, host of WTTW’s November 29 special “Biking the Boulevards,” kicks off the session with a discussion of our town’s rich bike history. “In the 1890s Chicago was the bicycle manufacturing capital of America,” he says. “Two-thirds of American bicycles were made in the region.” It turns out Richard J. Daley wasn’t the first mayor to push pedaling here – in the 1897 mayoral campaign Carter H. Harrison II coasted to victory with the campaign slogan “Not a Champion Cyclist; But the Cyclist’s Champion.”

Hans Heinsbroek, Consul General of the Netherlands, takes the podium and boasts that his country has 13,000 kilometers of bike paths, tens times more than the total length of highways, noting “The bicycle is the cleanest, most sustainable form of urban transportation.” Heinsbroek says Baer has asked him to read the guttural-sounding names of the other Dutch speakers. “Because, you know, Dutch is not a language but a throat disease.”

Hans Voerknecht, a sustainable mobility consultant, contrasts American and Dutch attitudes towards biking and driving. While most while most kids in Holland bike to school, many U.S. principals forbid their students to pedal to class. “People say the car is the symbol of American freedom,” he says. “But I don’t feel free when I’m sitting in a cage, stuck in traffic.”

Bike policy expert Arjen Jaarsma offers encouragement to Chicagoans who feel that promoting cycling is an uphill climb. He shows a graph illustrating how Dutch cycling dropped off sharply with the rise of car culture after World War II and has only recently recovered to its current levels, after lots of hard work.

Jaarma shows a YouTube video of shiny, happy people navigating the Dutch capital on two wheels and he points out that no one is wearing a helmet. “Bicycling is so normal and the infrastructure is so good there’s no need for them.” The clip features a bumping rap soundtrack: “Step on your pedals and listen to the mic / This is Amsterdam and this is my bike.”
Posted by John Greenfield at 10:00 PM