Citizens sound off on the CTA's 2011 Budget 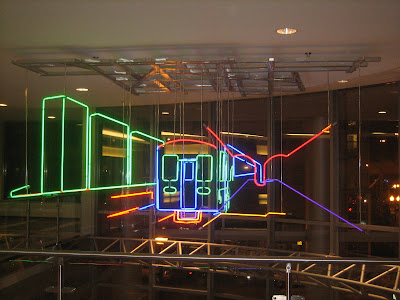 It's Tuesday evening at the Chicago Transit Authority’s headquarters, 567 W. Lake, and a few dozen citizens file through the lobby with its life-sized cow sculpture, plastered with photos of CTA stations, then up the stairs and past a 3D neon rendition of an “L” train zooming by skyscrapers. They’re here to offer their two cents on the agency’s proposed $1.337 billion budget for 2011 at one of four public hearings being held across the city. 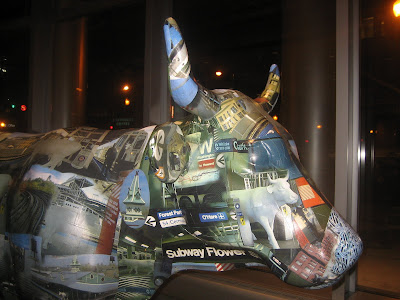 Last winter the transit authority tightened its belt by cutting nine express buses, reducing service hours on 41 bus routes, and providing less-frequent service on 119 buses and seven of the eight rail lines. The goal for 2011 is to hold the line on fare increases and service reductions, despite the bleak economic picture.

This new budget is actually 5.2 percent larger than last year, partly due to pay raises, healthcare and pension costs required by the agency’s contract with its union workers, according to management. “Balancing the budget was very challenging this year,” says CTA president Richard L. Rodriguez in a press release. “Nevertheless, the CTA expects to accomplish a great deal in 2011 and it will do so by being resourceful and innovative.” On the plus side, next year the agency will be adding new, smoother-running rail cars to the system and debuting a “Train Tracker” service.

At the hearing, as folks take turns stepping up to a microphone to have their say, Rodriguez and the CTA board members sit stoically at the front of the room, showing no emotion even when confronted by the more eccentric and irate speakers. The attendees are a racially mixed, blue-collar crowd, including several non-union employees who lost their jobs in the last round of cuts, wearing “Laid-off CTA worker” t-shirts.

“It’s good that we’re having no further reductions in service or increases in fares,” says transit activist Les Slater. “But we’ve already had reductions and increases, and there’s plenty of money to go round. When the banks need cash they get a bailout, but the majority of people served by the CTA don’t have political power – they need to organize.”

Laid-off CTA mechanic Ricky Anderson tells the board he’s anxious to turn a wrench again and frustrated to see recent job openings at the garages go unfilled. “I’m praying that when you get the money you’ll re-hire the workers,” he says. The meeting facilitator takes down his number and promises to have the HR department call him.” 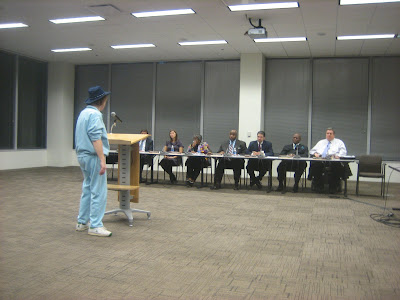 A woman describes how a non-employee was somehow able to steal a bus from the 103rd Street garage and pick up passengers and argues that if the public was allowed to monitor the CTA’s security camera system it might be easier to stop crimes in progress. “It really takes a lot of eyes to see what’s going on in the system,” she says.

Lawrence Msall, president of the Civic Foundation, a tax policy and government research organization, recommends repealing Blago’s free rides for seniors program. “We’re losing $25-70 million a year in revenue and it will only get worse as the population ages,” he argues.

George, a wild-eyed, slightly disheveled man who’s a regular at Cook County board meetings, takes the mic to complain about the relatively low attendance at this hearing due to the out-of-the-way location. “It’s appalling,” he says. “When these meetings were at the State of Illinois Center there used to be hundreds of people lined up to get in.” He keeps ranting about other topics well after his allotted time runs out and the facilitator sternly asks him to step down. George turns to the audience and says scornfully, “I think they deliberately try to distract me when I speak.”
Posted by John Greenfield at 2:40 PM

Thanks John. I was thinking about attending one of the meetings...but you've convinced me it would be more effective to simply write a letter voicing my various problems with the CTA, Metra and Pace. The meeting sounds like very little was accomplished.

The war between humans, orcs and elves continues. Lead your race through a series of epic battles, using your crossbow to fend off foes and sending out units to destroy castles. Researching and upgrading wisely will be crucial to your success!
slitherio | unfair mario 2 | age of war 2
The game controls are shown just under . Movement mechanisms primarily include acceleration and tilting controls.
cubefield | tank trouble | happy wheels | earn to die 3 | earn to die 4