Celebrating the launch of the GO TO 2040 plan 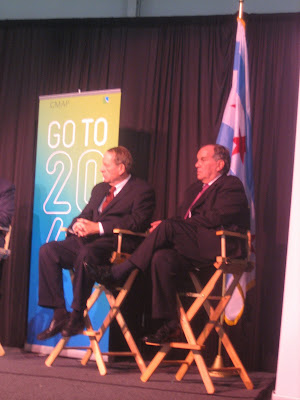 It’s pouring, but that doesn’t dampen the spirits of a thousand sharp-dressed politicians, urban planners and other civic leaders crammed into a tent on top of Millennium Park’s Harris Theater. They’re here to launch GO TO 2040, a blueprint for making tough development and spending choices in the Chicago area’s 284 communities, for the next few decades and beyond.

The Chicago Metropolitan Agency for Planning (CMAP) will lead the implementation process, and stakes are high. As the region’s population balloons from its current 8.6 million to an estimated 11 million by 2040, the decisions we make now will determine whether Chicagoland becomes more prosperous, green and equitable or devolves into a depressed, grid locked, smog-choked dystopia.

The plan, developed by CMAP its partner organizations over three years and drawing on feedback from over 35,000 residents, includes the four themes of Livable Communities, Human Capital, Efficient Governance and Regional Mobility. It makes detailed recommendations for facing challenges like job creation, preserving the environment, housing and transportation.

Banners at the launch party feature GO TO 2040’s cover image, an Aurora-centric aerial view of the region, with expressways and transit lines radiating from Chicago like bolts of lightning. Considering that this is a plan for future generations, affecting people from all walks of life, it’s odd that almost everyone on the stage is an older, white male in a dark suit. 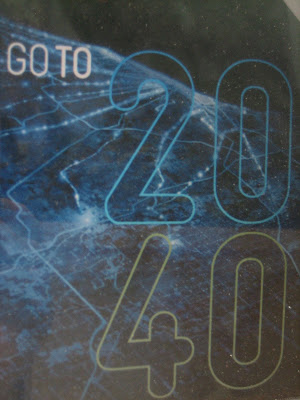 CMAP board chairman Gerry Bennett, mayor of Palos Hills, kicks off the proceedings by comparing the occasion to the 1909 release of Daniel Burnham’s “Plan of Chicago,” which helped create a city with plentiful parks and preserved the lakefront for public recreation. “When Burnham proclaimed ‘Make no little plans,’ he asserted that as a great metropolis we have the ability to reach for the unreachable,” Bennett says.

Senator Dick Durbin highlights the importance of local leaders working together to improve the region, and he warns the crowd that implementing GO TO 2040’s strategies during the current financial woes is going to take grit and perseverance. “We have one thing on our side,” he says. “A president who loves Chicagoland as much as we do.” 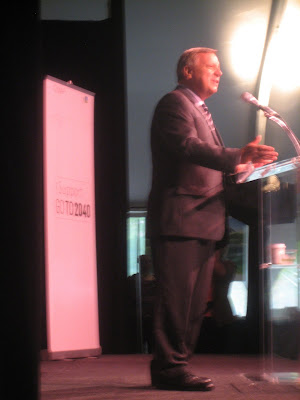 WTTW’s Geoffrey Baer moderates a panel discussion on the urgency of long-range planning and the economy that includes a fired-up Mayor Daley, wearing his trademark scowl. Daley says Chicagoans, and Americans in general, need to be more optimistic about our future. “Until we get our confidence back other countries will look at us as whiners.”

Michael Moskow from the Chicago Council on Global Affairs argues higher road tolls and parking fees are needed to reduce car dependency. “As you raise the cost of driving and make transit more attractive, more people will make the shift.” But George Ranney, head of the pro-business organization Metropolis 2020, scoffs, “Some of my friend’s radical ideas are not actually in the plan.”

Baer closes the discussion by recalling the words of businessman Charles Wacker upon the publication of the Plan of Chicago: “This will be remembered 80 years later as the day that gave Chicago the most beautiful lakefront in the world.” Today’s launch of GO TO 2040 is a similar occasion, Baer says. “Many of the people here today won’t live to see the results, but we can hope for them.”
Posted by John Greenfield at 11:30 PM