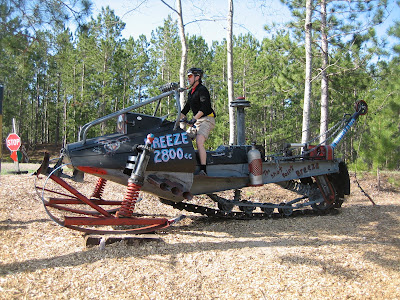 I’ve circled Lake Michigan by bicycle before, in stages, over a couple different trips. That’s the way I usually pedal around the perimeter of things, be it the state of Illinois or the continental U.S. (although I still have yet to ride the Eastern Seaboard from Key West, FL, to Bar Harbor, ME.)

I’ve ridden from Chicago to Milwaukee more times than I care to remember. In the late ‘90s I rode from the Windy City, via the east coast of Lake Michigan, to Marquette, MI, at the top of the Upper Peninsula, with my brother Dave in a 100-mile-a-day death march. And in 2007 I biked from Milwaukee to Marquette, completing the circuit. 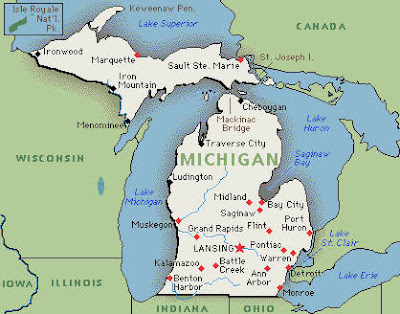 Although I’d already ridden across the Upper Peninsula, I try not to miss opportunities to go bike touring with my dad Roy, 74. So when he and his riding buddy Toby, picked the U.P. as their next cycling destination, I decided to meet up with them. Also, the proposed route would zig where my previous route had zagged, so much of the ride would be terra nova for me.

The guys flew into Green Bay, pedaled partway up Wisconsin’s Door County peninsula and back, then rented a car in Packer City and drove to Escanaba, MI, where the high school mascot is the politically incorrect but linguistically amusing Escanaba Eskymo. From there they rode north across the U.P. to Lake Superior.

Meanwhile, I caught a red-eye Greyhound bus from Chicago up to Marquette, arriving to catch a glorious sunrise over Lake Superior. Marquette, the largest city in the U.P. at about 20,000, is a major port for shipping iron ore, and home to the University of Northern Michigan.

There I met up with my old friend Andy Gregg, who used to run Chicago’s Blackstone Bicycle Works community cycle center and now makes most of his living building unique furniture out of bicycle parts (www.bikefurniture.com). He’s responsible for the barstools made of wheel rims at the Handlebar bar and grill in Wicker Park. After his work was highlighted in a New York Times article, Andy enjoyed a major spike in business, including an order for 20 chairs from a Saudi sheik. 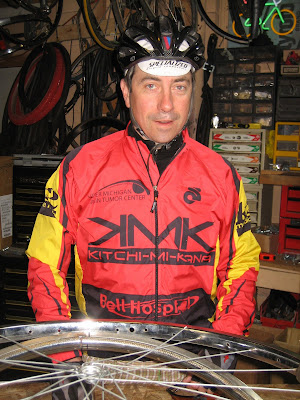 Andy Gregg in his studio

After a quick tour of his studio, including a ride on an old Schwinn Varsity Andy has set up as a ridiculously high-geared fixie, Andy rolls east with me along shimmering Superior shoreline for an hour or so until we reach Lakenenland, a crazy sculpture park created by retired steelworker Tom Lakenenen. It seems that the Marquette are has more than its fair share of eccentric artists working in metal. 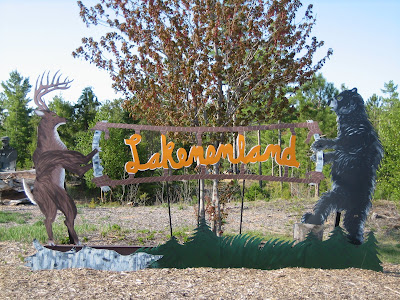 Andy tells me that Lakenen started the project to keep himself busy after he quit drinking. The place is now populated by dozens of quirky large-scale sculptures, including skeletons, an alligator, a spaceship, a giant snowmobile and a T-Rex with a fishing pole. Many of the creatures have speech bubbles asking the local township authorities to stop harassing the artist – apparently he doesn’t have the proper permits for his park. 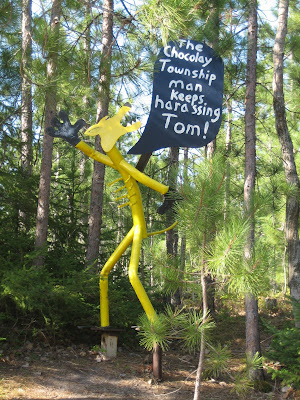 After Andy says goodbye, I continue east along the shoreline, passing through the town of Christmas with its towering Santa Claus billboards. 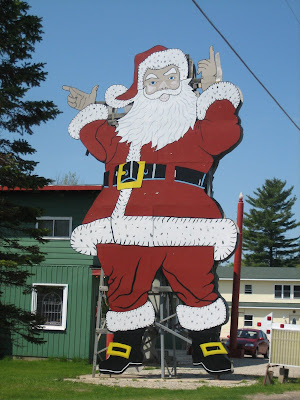 After pedaling about 40 miles I meet up with Dad and Toby on the main street of Munising, a city of 2,500 near Grand Island National Recreation Area and Pictured Rocks National Lakeshore, which is chock full of waterfalls. 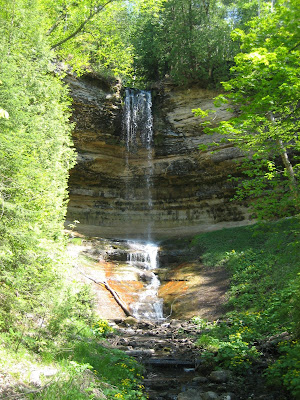 Unfortunately, the ferry to the island isn’t running, but we make an excursion to lovely Munising Falls, then hang out at a nearby beach where I lie on top of a picnic table and pass out for an hour, exhausted from my rough night on the bus. Then Dad and I pick up a whole smoked, locally-caught whitefish from a shack where men are smoking more fish while drinking cans of beer. We enjoy this delicious fish with Saltines and cheddar while watching the sunset over the bay.

We’d been planning to ride through Pictured Rocks to the town of Grand Marais but the highway we’d have taken is under construction. The guys instead decide to do a short day, riding on the highway directly to a tiny town called Seney, so I part ways with them to do a meandering route almost twice as long.

In Melstrand I make a quick pit stop at the Bear Trap, a tavern Andy recommended, full of taxidermy and tourists. Unfortunately it’s too early in the season for a pasty, the football-shaped, savory, meat-and-vegetable-filled pastry that is the national dish of the Upper Peninsula. It was originally brought to the U.P. by Cornish miners who brought it to work for lunch, reheating the pies on their shovels with their lanterns. Instead, I enjoy a Leinenkugel Creamy Dark. 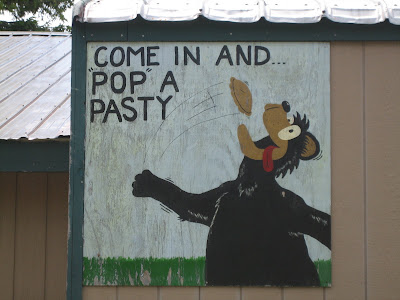 After enduring a dozen miles on a torturous dirt road, I head south to meet up with the guys in Seney, an old railroad stop. It’s Friday, so we feast on a traditional fish fry dinner at Andy’ Seney Bar, the only place to eat in town. There’s fried perch, perch and smelt, all locally caught and damned tasty, baked potatoes, coleslaw and rolls, plus fruit jars of LaBatt beer.

The next day we roll southeast together towards the Lake Michigan coast, stopping in the unfortunately-named town of Germfask to pick up fresh bread, chocolate chip cookies and whoopee pies at a church bake sale, a benefit to send a local kid to Boy Scout camp. We picnic by a lovely little lake in the town of Curtis for lunch, then hit the coast and end our day in Naubinway, a little tourist town near the northernmost point of the Lake Michigan coastline.

There I finally get to eat my first pasty of the trip at a pizzeria. Although the waitress is apologetic about the quality, this food ball, smothered with gravy and served with slaw, tastes fine to me after a day of riding. 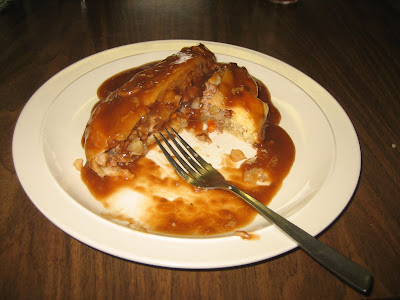 The following day of riding Highway 2 along the lakeshore provides great views, especially when I stop at rest stop a few miles east of Naubinway to bum around a boulder-strewn beach. 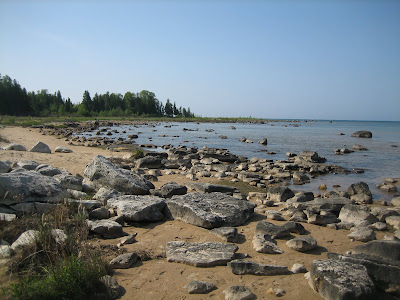 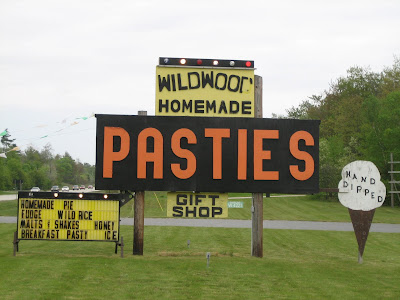 We spend the night in St. Ignance, near the five-mile Mackinac Bridge connecting the U.P. to the Lower Peninsula. This city of 2,600 on the Lake Huron coast was home to the St. Ignace Mission, founded by Jesuit priest and explorer Jacques Marquette. His gravesite is located at the former site of the mission, now the Museum of Ojibwa Culture, which also features recreations of a wigwam and a teepee.

In the morning we catch a gnat-infested ferryboat to Mackinac Island, about three miles long. It was an important site during fur-trading days, a British fort during the American Revolution, and the site of two battles during the War of 1812. Since there is little room for parking lots on this hilly little tourist haven, cars have long been banned and almost all business is conducted on foot, by horse and carriage, or on cruiser bikes. 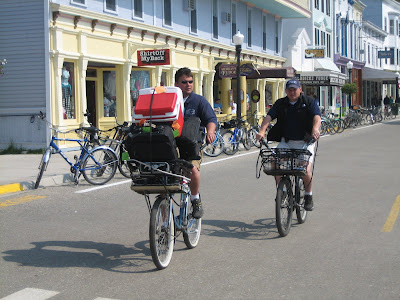 We ride the eight-mile road around the perimeter of the island, a terrific car-free pedal. 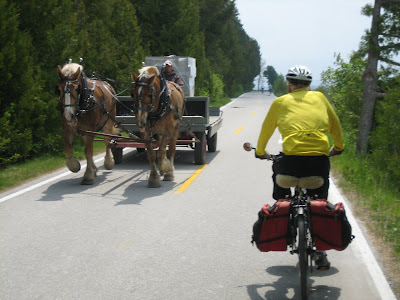 Toby on the perimeter road

Since it was not quite the tourist season, life on the island is relatively relaxed and we’re able to find $30 hotel rooms. I explore some of the island’s rock formations, like Arch Rock and Skull Cave, then chill on the porch of the gigantic, white Grand Hotel, taking in the terrific cliffside view and sipping a Bell’s Big Porch Ale (brewed in honor of what’s supposed to be the largest porch in the world) while a jazz band plays. I take another solo spin around the perimeter of the island at sunset. 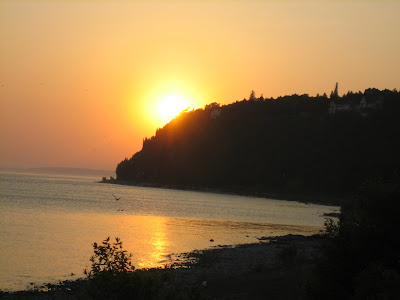 The next day the ferry takes us to Mackinaw City (note the different spelling but same pronunciation as the island) at the top of the Lower Peninsula, saving us from having to get a ride across the five-mile bridge, since it’s normally illegal to bike across. From there we wake our way around the west side of the northernmost lobe of the L.P. towards the Tunnel of Trees route, a historic one-lane road that hugs the coastline under a canopy of leaves. We’re planning to have lunch at Legs Inn, a Polish restaurant in the tiny town of Cross Village. A few miles from town Dad’s shift lever for his rear derailleur busts, turning his 27-speed hybrid into a three-speed, but luckily the Legs Inn has some nearby cabins we can crash in for the night. In the morning Dad and Toby will head 20 miles east to rent a car to drive home to Pennsylvania.

The Legs Inn is an amazing place for several reasons. It’s a restaurant staffed by Poles from Poland in the middle of nowhere, serving excellent (if pricey) food to rival the best in Chicago’s Avondale neighborhood. Located on a bluff it offers a marvelous lakeside view from its patio. But the décor is truly unique. 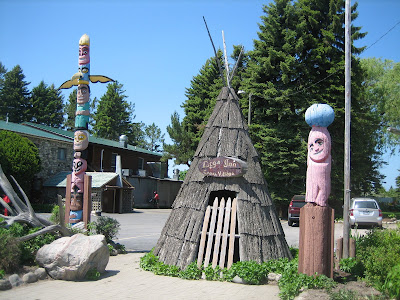 The place was built in the 1920s by Polish immigrant Stanley Smolak with help from local Chippewa and Ottawa craftsmen. It reflects Smolak’s obsession with Native American culture and his own whimsical vision, with dozens of figures fashioned from driftwood, lake stones and other found materials, looking like something out of a Howard Finster painting. The place is named for the many upside-down cast-iron stove legs bolted to the roof for no apparent reason. 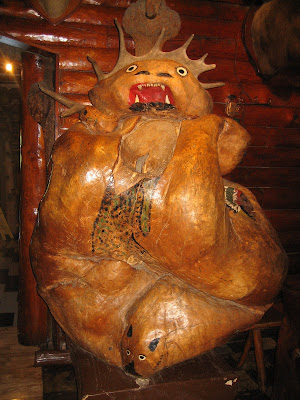 I say goodbye to Dad and Toby that night at leave the cabin at 5:30 am the next day to ride the Tunnel of Trees to Petoskey, where I’ll catch a bus home. The early morning ride on the car-less, green tunnel is surreal. I reach the city and pick up a bike box from Latitude 45, a bike shop which graciously had agreed beforehand to leave the box outside for me.

I have just enough time to box my bike at the nearby bus stop and hop aboard the Indian Trails bus, filled with Amish or Mennonite folks. I’m grateful to have an iPod with me for the ten-hour ride back to Chicago, after which I will have completed a circle around Lake Michigan once again.
Posted by John Greenfield at 4:00 AM

Love the Legs Inn! Haven't been since college, but would love to get back soon via that bus to Petoskey.

Well, don't get too excited about that 10-hour bus ride to Petoskey!

Another great report on another great trip. Like always, I wish I had ridden on this trip and instead of reading about it.

I love that bar in Seney. When the sun goes down, it lives in a world all its own.

Mackinac Island seems ahead of its time.