Bus-ted: a hit-and-run by a CTA bus driver? 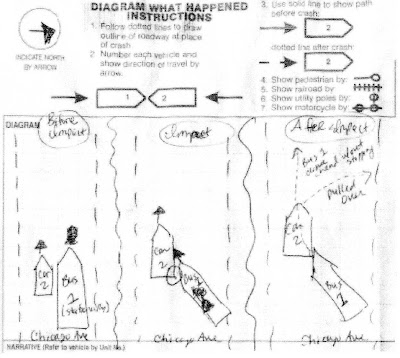 Crash diagram from the police report

The CTA cuts a check for a smashed car, but is a rogue bus driver still on the job?

[this article also runs in this week's Time Out Chicago, http://timeoutchicago.com.]

In a January 13 e-mail to the CTA’s board of directors, cc’ed to local politicians, Power sarcastically thanks the agency for an $846 settlement covering only about half the damage to his car, which he says was caused by a bus operator who fled the scene. He urges the CTA to fire the driver. “You’re a mass transit organization,” he writes, “which apparently harbors a hit-and-run driver who can harm people without accountability.”

“That e-mail is just another opportunity for me to say ‘fuck you’ to the CTA,” Power explains over the phone. “This situation is classic Chicago.”

According to the police report, on May 6, 2009, during the evening rush, Power’s wife, who requested anonymity here, was driving the couple’s 1989 Volvo west on Chicago Avenue near the Museum of Contemporary Art. A westbound CTA bus pulled out from a bus stop, its front left side striking the Volvo’s rear passenger side with enough force to move the car. When Power’s wife pulled over, the bus continued west then turned south on Michigan. Power’s wife jotted down the license plate and bus numbers and called the police.

Soon after the crash, Power says, he filed a claim with the CTA, submitting a copy of the police report with the offending vehicle’s numbers, for the damage to his car, estimated by a mechanic at $1,500. “We also wanted disciplinary action for the bus driver,” he says.

On September 18, Power says, CTA claims analyst James Schmit told him by phone that his claim was denied because the bus indicated on the police report did not appear to be damaged and because the driver of that bus denied knowledge of the crash.

The car owner appealed the decision. In late September, after inspecting his vehicle, the CTA settled with him for $846, the blue-book value of the Volvo. The agency wrote the check because “the damage sustained was consistent with a possible collision with a bus,” CTA spokeswoman Wanda Taylor says.

Power says he again spoke with Schmit about the case in late September, after the settlement, and asked to receive notice the operator had been disciplined. Schmit conceded that hit-and-run drivers are a menace, Power recalls. (Last fall a disabled man the #14 Jeffrey Express bus. When the driver pulled away without
picking him up, he approached the bus, then stumbled and fell under the wheels and was killed. The bus stopped briefly, then continued down the street until it was flagged down by a witness.) But Schmit also said it would not be possible to tell Power whether the bus driver was reprimanded or fired.

The CTA turned down our request to interview Schmit about whether action had been taken against the implicated bus driver. “We do not divulge disciplinary action against an employee,” Taylor says.

Asked if the license plate and bus numbers on the police report, along with CTA staffing records and the damage to Power’s car, were enough to prove the bus driver was responsible, Taylor says, “That’s information that’s not definitive.” Asked if this means no one has been disciplined, she responds, “Correct.”

Power says it’s ridiculous there have been no consequences for the bus operator who allegedly hit his car. “That driver could have killed someone, and the taxpayers and passengers who support the CTA everyday are being smacked in the face.”
Posted by John Greenfield at 4:48 PM

This is at best, ambiguous and unprovable and the CTA's position and action can be defended.

Power said the bus hit him. The CTA's investigation said the unnamed bus driver said he didn't. No proof seems to be available to support either side.

Who is the CTA to believe, an outside who drives a car, or one of it's own employees?

Rather then spend even more money to join into a long defense, the CTA forked over the worth of the car, $846, and evidently Power accepted the money. Case closed.

I don't know who's right and who's wrong in this case, but I didn't see any evidence that fully supports either side. All we have is the verbal testimony of Power's wife, who requested anonymity.

Don't be so quick to blame the CTA - it may be completely innocent in this case. Powers may have stiffed the CTA and benefited from income the CTA riders are supplying.

I wonder if it was the same driver that took off my passenger-side mirror when she decided to merge into the lane I was occupying on LSD near Soldier Field last fall.

I had two witnesses in the car. One snapped a photo of the bus number/plates.

Sorry, but, as a bike rider, I'm especially disinclined to believe ANYONE who drives a Volvo, Audi, Infiniti, Lexus, et al because of the sense of entitlement that drivers of such vehicles seem to think comes with owning/driving such vehicles.