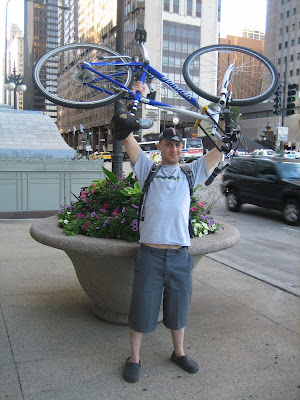 Interview and photos of Dubi Kaufmann and Critical Mass sticker by John Greenfield; all other images by Dubi Kaufmann

Dubi Kaufmann is closing in on his goal of taking a thousand photographs of Chicago cyclists holding their bicycles up over their heads in what Kaufmann terms a “Bike Salute.” By July 14 he had reached photo #935.

Since early 2008 he’s been going to local bike events like the Tour de Fat, the Dyke March ride, the Bike to Work Rally, Critical Mass and the Soldier Field Criterium, asking attendees to lift their rides and pose for snapshots. The results are up at www.bikesalute.com.

Kaufmann will celebrate the completion of his project with the Air Ride on Sunday, July 19th. This free group ride meets at 5 pm at Olive Park, just east of the Ohio Street Beach at 601 N. Lake Shore Drive, and will cruise the Loop, ending at Northerly Island. There Kaufmann will take an aerial photo of the group with a camera attached to a kite.

VWYF recently met with Kaufmann, an Israeli immigrant and computer programmer at Intelligentsia Coffee on Randolph to discuss his motivation for the Bike Salute project as well as other photography and graphic design endeavors which appear on his site, www.dubster.com.

I learned to ride a bicycle when I was seven or eight. As a kid in Israel I liked to ride BMX, jumping off of small ramps that I built with my friends. And then of course I kept riding bikes as an adult.

What brought you to the U.S. from Israel?

It’s America. The streets are paved with gold – there are so many opportunities. I’ve been here for almost 13 years and I’m still very excited about being here. 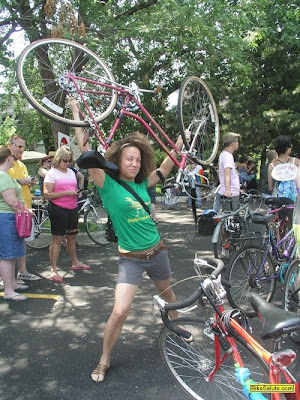 What brought you to Chicago?

My family. I’ve got some relatives in the north suburbs. I came here to study film at Columbia College, with a focus on animation.

I took at look at www.dubster.com. There seem to be lots of examples of ads, short movies, graphic design projects and games. What’s your day job?

I’m a consultant, a freelance programmer. I do it for ad companies that are contracted by Fortune 500 companies like oil companies and insurance companies.

You seem interested in puzzles and visual puns. For example, you’ve got an application where you can color in the Bean at Millennium Park and you’ve got a device that let’s you create a [red, white and blue Shepard Fairey-designed] Obama-style portrait.

Yes, I did it about a week before the election. But I wrote it for the Mac only and then someone took the concept and made it available for the PC. I didn’t want to deal with the PC stuff so I just left it at that. My program got 50,000 downloads and a lot of press.

So you just do these puzzles and applications and things for fun?

Yes. It’s a learning experience. As a programmer I have to be up-to-date with all the new technologies. A good way to learn a new technology is to do something fun with it.

Have you been riding for transportation in Chicago for a long time?

Ever since I moved to the Loop. I used to live up on Granville and the commute downtown was almost impossible with a bike. It wasn’t an efficient way to get downtown.

How long have you been riding with Critical Mass? 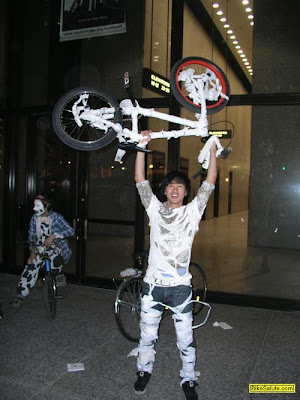 So how did you get the idea for the Bike Salute project?

It started out with an attempt to impress a woman. We had been talking about art and cycling so I decided to combine the two into a photography project. She was definitely impressed, but a romance was not meant to be.

When did you start the project?

In January of 2008. I was taking random photos here and there and then in June of 2008 I launched the site and the blog and I set up the goal of a thousand photos.

So are there any rules as to what you can and cannot do to get photographs?

Yes, it’s one person, one bike. If someone wants to pose with a tandem bike they have to be conjoined twins. It has to be a real bike, and the person really has to be holding the bike up in the air by his or her own power, not lying on the ground with the bike behind them.

Over time I’ve learned better how to approach people and ask them to pose. At first I was very shy. I was like, “Would you like to get your picture taken? You really don’t have to but it would be nice.” Now I’m better at asking. 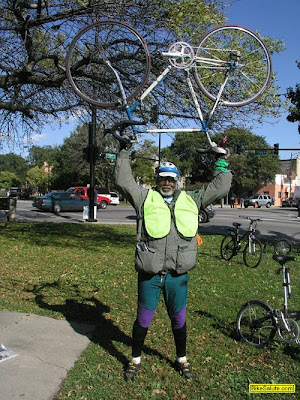 I’ve learned that I have a better chance if I ask a group of people instead of an individual. With a group I’m not targeting anyone in particular. Otherwise a person might think I have some kind of hidden agenda. Usually the guy poses first and then the woman says, “I don’t know if I can,” and it ends up she can.

Another thing I learned is that it’s very important to take the water bottle out. It’s very funny when a water bottle falls on somebody’s head. It’s even funnier when it starts dripping and the person thinks it’s raining. For safety it’s important to take out the lock. Fortunately I’ve never had a lock fall out on someone’s head.

Does the Bike Salute symbolize anything in particular to you? Does it have a political meaning or are you just saying, “Yay bikes!”?

Yes, it’s “Yay bikes!” It doesn’t serve any purpose but as a celebration and a declaration of independence.

Now, in the early days of Chicago Critical Mass a rider named Jim Daniels created a sticker you might have seen. It’s like a green traffic sign with male and a female figures holding their bikes up in the air. Have you seen that? 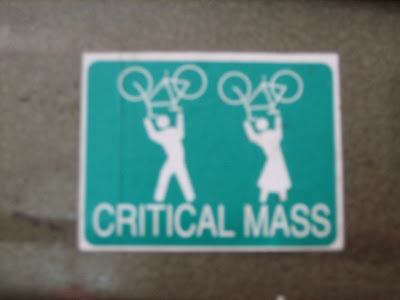 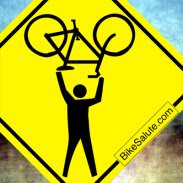 How do you feel about the term “Chicago Hold-up” versus “Bike Salute.” Is ‘Chicago Hold-up” a valid term – is there any possibility the gesture was invented here or is that off-base?

You know, I’d like to tell you more about why I chose to do the bikesalute.com site, about the artistic decisions.

I’ve been doing projects on-line before where it’s a collection of photos. It started with “Parking Spots.” It’s a site that I did in 2002 that also involves lifting and transportation. I asked people around the world to hold a toy car next to a real car and photograph it and send me the photo. 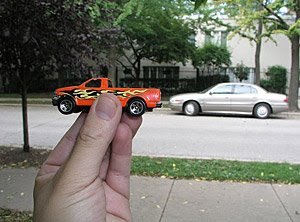 I learned a lot from doing that. It was before there was Flickr and other modern photo sharing sites, so I had to write my own program to do that.

Lately I’ve been doing other projects that are collections of photos of the same thing. Like “Type Nesting” where I just collect photos of letters on signs. It’s on my site.

I like taking a lot of photos of the same thing. It’s not something I came up with, it’s just something I like to do. It’s been done before.

One more thing I’d like to mention is I have a memory game on the bikesalute.com site. The game forces people to look at the subtleties. In the memory game I gave people the option of making it a little harder by just looking at close-ups of the faces or looking at the bikes. I heard from people who say they don’t remember faces but they remember the bikes. When they talk about other cyclists they say, “Oh, it’s the guy with the such and such bike,” because they remember the bike but not the face. 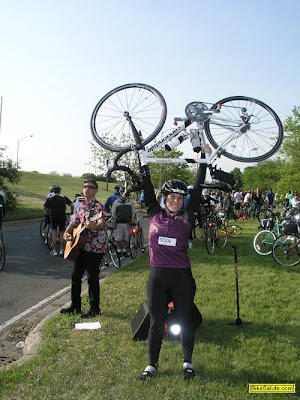 Overall how has the experience been, taking all these photos?

It’s been good. I can be really happy programming at home. Just let me be by myself and write code and I’ll be happy as a bivalve. But doing this project forced me to be more social, more gregarious and I met a lot of people, which was nice. It’s much easier for me to approach people to photograph and there’s now a thousand people in Chicago who know who I am.
Posted by John Greenfield at 2:00 PM

Wow! What an amazing asset to the city! An exemplary combination of Art/Social Media and genius!

I think it now should advance to the million bike-salutes project, the world is hungry and thirsty for such gentle and original projects that do not include atom bombs/ religion/ genetic sequencing