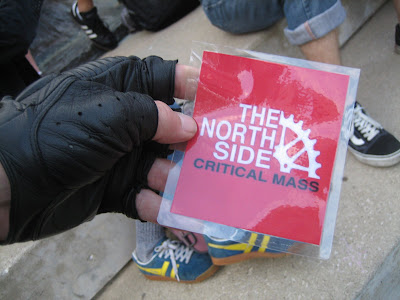 The North Side Critical Mass is the newest of Chicago's five neighborhood Critical Masses - smaller, more intimate rides that harken back to the early days of the Daley Plaza Mass, when it was possible to fit the entire group into one saloon. Other "local motion" masses include Wicker Park, Pilsen, Oak Park, and Evanston. The North Side event gathers at 6:30 pm on the second Friday of the month at Senn Park, 5887 N. Ridge in the Edgewater neighborhood.

Julie Hochstadter started a Far North Side Riders discussion group on the Chainlink social networking site earlier this year. "I just thought it would be fun to start a group for all the riders up north," she says. Out of these discussions the idea for the new Mass developed, and fellow North Siders Tony Riccardo, Hector Soriano and Rachel Friend promoted the ride, which started in March, says Hochstadter. 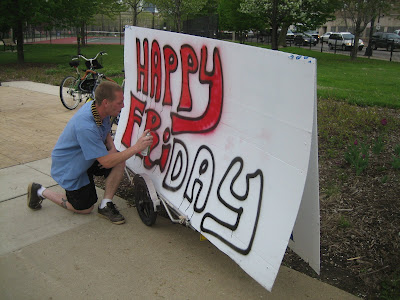 On Friday May 8 at 6:30, a handful of bicyclists are gathered under Senn Park's statue of Young Lincoln by Charles Keck. A scruffy youth called "Rufus" is spraypainting "Happy Friday" on a billboard trailer towed by Uptown Bikes founder Tim Herlihy. "The first ride in March was so cold," Rufus recalls, "afterwards at the bar my buddy stepped outside and sat down inside a stranger's car to roll a joint. The guy came out and yelled at him, so my buddy kicked in a tailight and ran into the night." 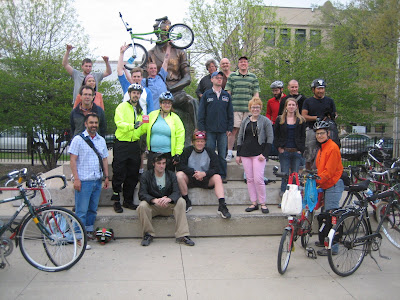 As more cyclists trickle in, Soriano hands out laminated spoke cards with the ride's logo, a take-off of the North Face label, designed by Garth Katner. "I like this ride 'cause it's small, so each rider has more say in what we do," says Riccardo, who's brought a big sound system trailer with buzzy bass. He's aiming to open a new community cycle center in Albany Park by the end of the summer, ideally in the neighborhood's community center, 3403 W. Lawrence.

Friend passes out cue sheets for the NSCM Garden Ride, visiting neighborhood green spaces all over the Mid-North area. With Soriano's speakers blaring out Mellencamp's "Cherry Bomb," the group of about 30 rolls out of the park and heads towards the vibrant Andersonville business district. The Puppet Bike rolling theater happens to be set up along the strip, with furry animal puppets dancing to bluegrass on its miniature stage for an appreciative crowd. Out side of the new bar SoFo (South of Foster) patrons dance to U2's "Vertigo," blasting from Riccardo's trailer. 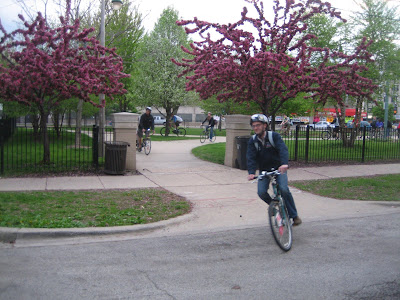 The group heads east on Wilson into a grittier section of Uptown. Kathy Schubert is towing her new dog on her Bike Friday, a mop-topped, "schoodle," or schnauzer-poodle mix, named Suzie. After continuing south on Kenmore, the cyclists stop in the street by Ginko Organic Garden, 4055 N. Kenmore, where a man and woman are sitting on a bench. The mob hoots and hollers until the couple kisses, prompting applause from the pedalers.

Returning to Wilson and heading west the crowd passes the American Indian Center and a mansion owned by the heirs to the Abbot Laboratories fortune. In Lincoln Square, diners at the Fiddlehead Cafe groove to "Wild Thing" by the Troggs booming from the rolling sound system. The ride stops for a moment on a bridge over the Chicago River to admire the view, then rolls into Ravenswood Manor, where the disgraced ex-governor lives. "To Blago's House!," someone shouts.

As more beer is consumed, riders are getting rowdier. "I love this shit, this makes my day," belows one as the Mass heads north on Kedzie through a a section of Albany Park with many Middle Eastern businesses. Stopping across from La Pupusas Salvadoran restaurant on Lawrence, the cyclists are confronted by a couple of police officers in an unmarked car. Herlihy, older and wiser then most of the participants, explains the situation and the cops drive off. 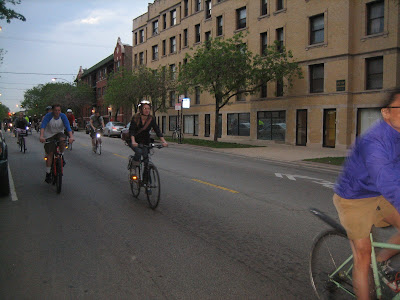 The ride stops at a number of community gardens along the way, at Turtle Park, Northside College Prep and Waters Elementary School, where a new Astroturf lawn was recently installed. Friend lies down on the springy surface and exclaims, "Ah, the smell of Dioxins from outgassing plastic turf."

The bicyclists roll southeast on Lincoln into a full orange moon to the sounds of "20th Century Boy" by T-Rex, towards Fizz bar, near the six-way intersection with Belmont and Ashland. Over beers and burgers on the patio they celebrate another successful North Side ride. "There was even more spectator response than last time," says John Ladner, whose flashing spoke lights were a hit with bystanders. "We get a lot more love on these neighborhood rides."

Friend points out the motley crew of cyclists assembled around the long table. "As you see, our ride is a mix of hipsters, nerds, non-drinkers and alcoholics," she says. Riccardo's wife Marlene adds that this diversity is the strength of the North Side Mass. "In all these rides you get to meet all kinds of people, "she says. "We're like a family, but with new members joining us every month."
Posted by John Greenfield at 12:00 PM