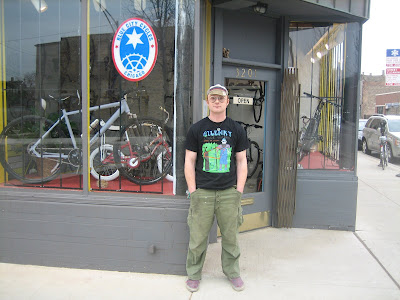 Chicago’s newest bike store Blue City Cycles opened last month at 3201 S. Halsted in a former barbershop on the main drag of the South Side’s Bridgeport neighborhood. Co-owners Clare Knipper and Owen Lloyd are veterans of various local shops and community cycle centers – Lloyd and I have worked together at Boulevard Bikes in Logan Square.

The new store is small but stocks a variety of new Schwinns, ranging from road to utility to single-speed to the charming “Jenny” model, a canary-yellow cruiser with white fenders and brown leatherette saddle and grips. Blue City also has a good selection of commuter accessories and the basement is full of old bikes waiting to be rehabbed and sold. I caught up with Lloyd, who will be handling most of the mechanic work, on a Thursday afternoon. 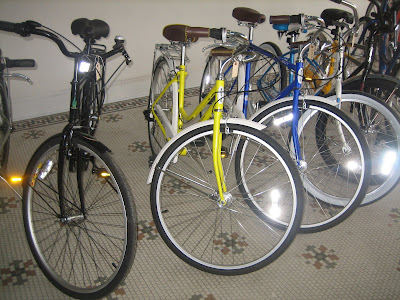 Tell me about your experience with bicycles. What stuff have you done that’s prepared you for opening a shop?

I’ve worked in various bike stores and retail settings for the last ten years. I also took a two-week course in frame building and repair at the United Bicycle Institute of America in Ashland, OR, about two years ago.

You used to be head mechanic at Blackstone Bicycle Works [a bike education center and shop in Hyde Park on the South Side] – what did you learn there?

Blackstone was good because it was the “leanest” bike shop I ever worked at. Not having an awful lot of money to spend, we stocked basic retail goods. It was like, “What do we need to have to get the job done and provide people with basic bicycle service? – flat fixes, tires, lights, locks, helmets. But we didn’t have the money or the market to go get lots of stuff. The other bike shops I’ve worked at had a higher volume and were able to have a lot more retail goods. But Blackstone was nice because it’s a bare-bones bike shop. 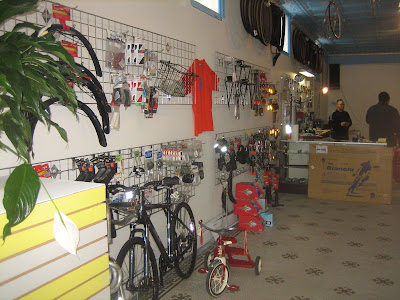 Why are there so few shops on the South Side and what made you decide to open a shop here?

Some of the neighborhoods may be too low-income to sustain a full-service shop. They can make it worthwhile for the local hardware store to keep some repair goods on hand. Also, the South Side is less densely populated then the North Side so it may actually be easier for adults to get around by car all the time.

The reason Clare and I decided to open the shop here is I’ve lived down the street from here for three years and I noticed the neighborhood had a lot of cyclists and there wasn’t a local shop to take care of them. The closest one [Art’s Cycles in Pilsen] is three miles away. Kozy’s, the big local chain, opened up in the 1940s near here at 35th and Ashland. The only reason they closed that location is because their North Side shops were making a lot more money.

But there was still a market and a purpose for a bike shop in the community. And it seems like the number of people riding bikes in the neighborhood has increased over the last three years. So we figured there’s still enough business in the neighborhood to sustain a small store.

What made you decide to open your own shop?

I guess it’s the classic American dream thing – open your own small business and be your own boss. At several of the jobs I’ve worked at, including the bike shops, in the end I got fed up working for other people. So I figured working for myself might be a good idea.

In the small bicycle shop industry you hit a ceiling in terms of how much money you can earn as a mechanic, even at shops that pay well. So one way to maintain your independence is to open your own shop and see if you can make a better living. Right now I’m not making a better living; maybe I will in five years. Maybe I won’t. But as long as I can earn as much as I did at other shops I’ll be happy. 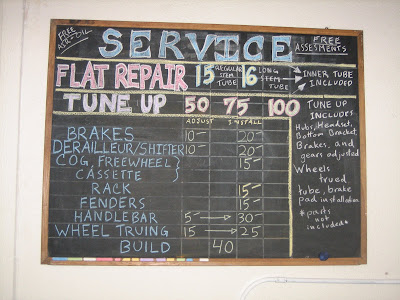 What other shops have you worked at in Chicago besides Blackstone?

I started out at Working Bikes [Cooperative, in Tri-Taylor,] then I spent two seasons at Rapid Transit in Wicker Park and then Boulevard Bikes for a season.

You and I worked together at Boulevard a little bit and it seems like the layout of your shop is pretty similar. Did Kevin [Womac, the owner] give you any help in opening your own shop?

He gave me advice here and there, like he suggested that I be a Schwinn dealer which was a very good idea because the company has good name recognition in the neighborhood. I asked him about how much inventory he started with and various things like that. A lot of the mentoring I’ve gotten from folks like Kevin, and Chris Stodder and Justyna Frank at Rapid Transit is just seeing how they run their shops, seeing what I like and what I don’t like. That’s helped me out as much if not more than outright asking people. 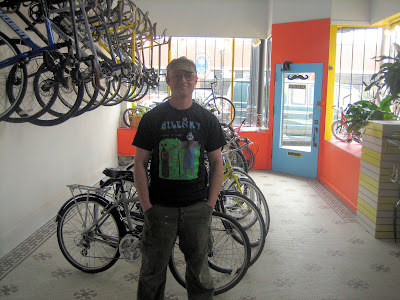 Does your shop have any particular philosophy or goals?

Right now we’re trying to be a commuter and neighborhood shop and we’ll have to see what people in the neighborhood want. I’ve tried to keep the price range of the bikes we stock at the cheaper end of the scale. We’re trying to get the price point between three and seven hundred dollars, to try to provide reasonably-priced bikes to get people out there and riding.

Now that the shop’s open are you still going to be able to do frame building?

The store will probably take some time away from frame building but I’ve always worked full-time as well as doing frame building on the side. I’ll offer frame repair and fabrication services through the shop. Chicago doesn’t seem to want to support a full-time frame builder. In Portland you can’t throw a rock without hitting a frame builder. The coasts seem to be able to sustain more frame building at the moment but I think it will catch on here eventually.

Where do you see the shop going the future? What’s it gonna look like in two years?

It’ll probably be a lot grubbier in two years. The floor plan might change if we need more or less workspace. Hopefully we’ll have at least one more repair area and a washtub. Originally we’d hoped to open a café along with the shop, but that didn’t pan out. So in a couple of years it would be awesome if someone opened a café next door. 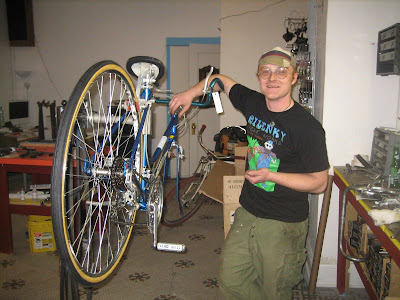 What’s the funniest thing that ever happened to you while working at a bike shop?

One time I was working at Rapid Transit and I was making fun of one of the mechanics who wasn’t there. It was his day off but it seemed like he would always show up on his day off. I was sort of mocking him and making fun his beard and the moment I stopped talking about him he walked in through the door, almost like there was a psychic connection, and I just totally lost it.

It seems like beards are big at Rapid Transit.

Yeah, something in the water there makes people get facial hair and tattoos.

There’s also the story of the ants in the bottom bracket. At Working Bikes at the time, a customer would pick out a bike and we we’d fix it up on the spot and they would leave with it. As I was working this particular bike I noticed there was an ant on the brake lever. I brushed it off and kept working on the bike. Then there was another ant and another ant and another ant. And I stopped and I thought, where the heck are these coming from?

So I started tapping at the frame with a wrench and ants just started pouring out of one of the vent holes in the bike and out of the seat tube. There was a live ant nest in the bottom bracket of this Schwinn ‘cause the bike had probably sat outside behind someone’s garage. It had been donated that day. So I said to the customer, “You might have to come back for this – we’re going to have to fumigate.” That was totally bizarre. It’s the only time I’ve found living creatures inside of a bicycle. I’ve found a few dead ones before.
Posted by John Greenfield at 3:00 AM

Hey, Chicago will never have too many bike stores. Welcome to Blue City Cycles!

This is a great description of this new store. It seems to capture the flavor and tone of the place, and makes me want to go check it out. Thanks.

Thanks for the interview. It's refreshing to hear about a new bike shop that is likely to be well-run and relatively inexpensive. With a few exceptions, we seem to get one or the other. I'm a lot closer to Blue City than Boulevard Bikes so I'll try heading south.

Owen and Clair RULE!!!
Congradulations on the shop!!

thomas sabo bracelet Some basic considerations can help a person to get the right par of shoes. Below are some of the important points that one may need to think about before getting the shoes. thomas sabo bracelets Style is not that important - majority of the people choose their tennis shoes considering only brand names and its looks. discount thomas sabo bracelet They don`t keep the importance of their feet up front most of the times. It can be a little hard to give up an awesome looking pair of shoes that matches your personality cheap thomas sabo bracelet But when it comes to the usage, they should be chosen based on their functionality. The tennis shoes that one is purchasing should be able to protect and support one`s feet ideally. thomas sabo bracelet clearance They are equally as good for keeping the water and weather away from your feet and both brands offer cheap golf shoes as well as their many expensive varieties. thomas sabo Shopping at FootJoy or Adidas can give you fashion, color, and a large line of shoes online and in stores.At any rate, be mindful of our golf game if you are a real competitor--know that shoes are the most vital part of your golfing attire. discount thomas sabo You need to shop around, compare prices. And get the most for your money. thomas sabo sale uk That doesn't mean you should opt for a pair of discount shoes that also have cheap quality. What would be the point of purchasing a shoe that is not comfortable to wear. thomas sabo jewellery If you care anything about your success in golfing, shop around. thomas sabo silver The Heel Box - it is an important part of the shoes.

Professional trading signals delivered to your mobile phone every day.