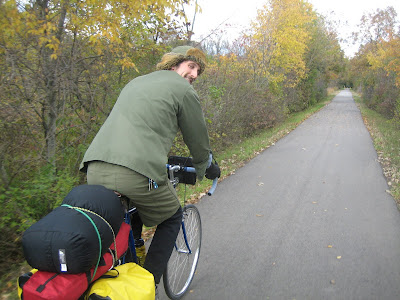 Grant Petersen from Rivendell Bicycle Works has written about the “Sub-24 Hour Overnight” as a type of bicycle travel anyone can do. Even if work and domestic obligations keep you from taking off a large chunk of time to go on a long-distance bike journey, you can squeeze a S24O into your schedule.

You simply pack your bicycle with camping gear, leave in the afternoon or evening, ride a couple hours, camp, sleep and ride home. This kind of trip is not so much about getting tons of miles in, but rather the transformative power of leaving your daily routine to go spend the night outdoors. Even if it’s only for one night, it’s worth it.

Petersen recommends driving out of urban areas to get to green space if necessary, but here in Chicago we’re lucky to have Metra, an extensive commuter rail system that allows bikes on board. There are a bunch of state parks that allow camping which are only a short bicycle ride away from Metra stations: Illinois Beach, Rock Cut, Shabonna Lake, Kankakee River and Big Foot Beach. In southern Wisconsin, only 13.5 miles from Metra’s Antioch station, is Bong Recreation Area – put that in your pipe and smoke it.

Last Saturday, a few of my bike buddies did a fairly spontaneous camping trip to Chain O’ Lakes State Park in northwest Chicagoland, near the Cheddar Curtain. The Chain O’ Lakes area includes several good-sized lakes, some of them three or four miles long, popular with boaters and fisher-folk. For most of our crew this is truly a S24O – they catch the train in the afternoon northwest to the Fox Lake station and pedal a mere five miles to the campground, returning early the next afternoon. 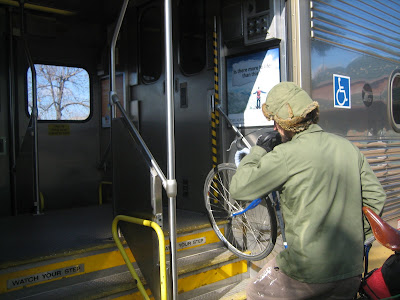 My friend Kevin and I decide to get some more biking in by catching a different train west that morning to Elgin and pedaling up the Fox River and Prairie trails most of the way to the park, making it a 40-mile day. Arriving at this river town of about 100,000, we eat a hearty Thai lunch at the subterranean Bangkok House, 11-15 N. Douglas. Afterwards, Kevin grabs an espresso at nearby Domani Café, a tiny Italian coffeehouse at 109 E. Highland. 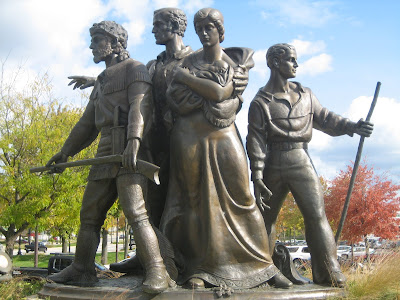 We pick up the paved Fox River Trail and start heading north past a small island in the river with a picnic pagoda, a small dam, then a Soviet-style sculpture or a pioneer family. What started out as chilly, drizzly day has turned lovely with fluffy clouds in the cobalt sky. As the trail continues out of town into wooded areas we thrill to the fall colors.

We stop in East Dundee, formerly home to the slightly creepy amusement park, Santa’s Village, to check out the trailside Bicycle Garage, 11 Jackson, an old-fashioned shop with a vintage J. C. Higgins on the sales floor. Nearby a farmers-and-flea market is shutting down but one booth still has a good selection of pumpkins and gourds. 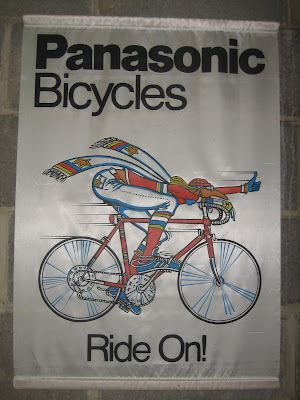 In Algonquin the trail leaves the river and changes names. We stop at Prairie Trail Bike Shop, a more modern trailside store at 315 Railroad St. I duck in to check out the merchandise while Kevin remains outside. “You’ve obviously come a long way,” says the owner,” looking out the window at our camping gear. “And your friend’s even smoking a cigarette.”

Continuing past areas with tall grasses and fading wildflowers, we stop at a supermarket in McHenry to pick up groceries. As I’m waiting outside with the bikes an older woman comes outside and unlocks her mountain bike. She tells me she commutes 18 miles each way during the summer to her job in Barrington. “Biking is a good way to get around,” I say. “Yes,” she says. “It’s good for you, it saves gas and it’s good for the environment.” “And it’s fun,” I add.

When Kevin returns, he tells me he just had a run-in with a tough guy in the bakery section. My friend’s wearing an army jacket and a furry Elmer Fudd hat. The tough guy said, “I thought Halloween doesn’t come until next week.” Kevin answered, “Actually, it’s two weeks.” This story reminds me of Bob Segar’s song about touring with a band, “Turn the Page”: “Well you walk into a restaurant, strung out from the road / You can feel the eyes upon you as you try to shake the cold /You pretend it doesn’t bother you, but you just want to explode [saxophone wail].”

We leave the trail and head past Johnsburg, Illinois. Singer Tom Waits’ wife grew up on a farm here, so he wrote her a love song with the town’s name as its title. The terrain is getting surprisingly hilly for Chicagoland – at times I’m actually getting down in my drops and whizzing down the hillsides. 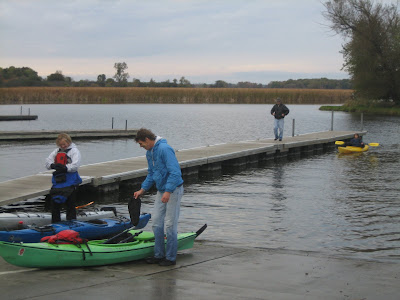 Soon we’re at a back entrance to the state park and before heading to our friends’ campsite we make our way to a boat launch to check out Grass Lake before the sun sets. A group of kayakers is heading back to shore. On another camping trip here a few years ago a friend and I rented a canoe and paddled out to Blarney Island, a floating Jimmy Buffet bar in the middle of the lake, but unfortunately it’s closed for the season.

We find our friends Corey, Mario and Mr. Bike at their nicely wooded non-electric site, and the fellows are already in good spirits. As darkness falls the temperature drops and I keep needing to add layers of clothing to stay warm.

We light a roaring fire and prepare a feast: bread and brie with homemade pesto; tostadas with black beans, cheddar, tomatoes and salsa; fresh steamed vegetables; and a Tofurkey, a soy-based turkey substitute that looks like a large softball. I cut the orb into thick slices and sauté it in butter and it’s not too bad. Afterwards we stay warm around the fire with whisky and fat White Owl “New Yorker” cigars. Mr. Bike and I exchange terrible puns. 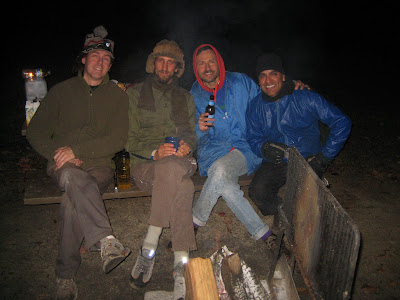 Sleepy, I snuggle fully clothed into my medium-weight sleeping bag on a thick inflatable ground pad inside my tiny one-man tent and stay roasty-toasty all night, despite the sub-freezing temperatures. In the morning all of our gear is covered with a thin layer of frost. 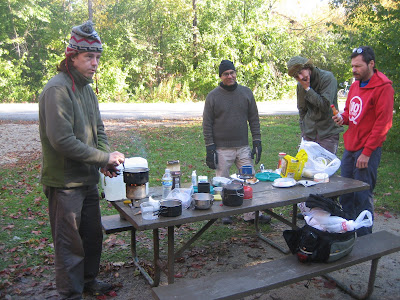 After a quick breakfast of instant coffee and pop tarts, Kevin and I pack up and pedal to the town of Fox Lake. With time to kill we grab a second meal at the cozy trackside Whistle Stop diner. I scarf down a warming, calorie-dense Cowboy Skillet: eggs, potatoes, cheese, diced sausage and gravy, served with a biscuit. 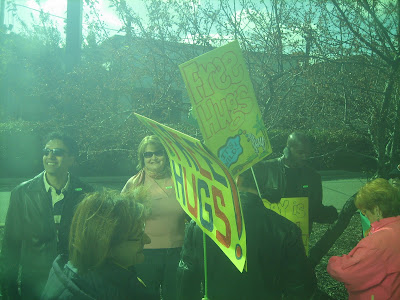 Soon we’re onboard the train that will take us back to the city, only slightly late for my noon shift at the bike shop where I work. At the Libertyville stop, for some reason a group of well-dressed professionals is standing outside holding picket signs reading “Free Hugs” for “Global Free Hugs Day.” I say, “Gee, I didn’t even know Hugs was in prison.”
Posted by John Greenfield at 3:00 PM

Haha, I laughed out loud throughout this one.

And I realize my need to embrace the S24O concept fully... since a snooty bike builder endorses it.

P.S. During our visit, I sang "Johnsburg, Illinois" and Kevin shouted me down. True story.

Illinois Beach State Park makes another good S24O ride. You can ride up in one day, camp, ride back the next - most of it off-road.

The really good part is that you don't need to cook food; there's plenty of places to eat in nearby towns. No Metra necessary either.

Curious, what makes that sculpture "Soviet style" to your eye?
Also, I'm sure that 'cigarette' Kevin smoked didn't help him with the run-in in the grocery store; he was probably grinning maniacally.

Finding stylish jewelry gift ideas for mom links of london is simple when you shop at the right online store. You can find the ideal gift of jewelry links of london charms for Mother's Day, her birthday, Christmas or just "because". What mom links of london bracelets & grandma doesn't enjoy receiving jewelry for just about any reason and mom will remember you each time she puts on her special jewelry links of london necklaces gift from you.This column will talk about the top six stylish jewelry gift ideas for mother & grandmother such as: stunning links of london sweetie bracelet mother's rings, jewelry that has been personalized or engraved, stylish watches, magnificent mother's earrings and distinctive mother's charm bracelets that give a mother a valued memento of those she cares the most about - her kids.

Which you must remember pandora australia when engaging into such business. When you chamilia charms sell diamond jewelry, a seller ultimately chamilia beads banks on the beauty of diamonds. That genuine pandora charms means, when selling them, you must pandora bracelets make sure that it is still as beautiful pandora canada as it was when you first bought it. So chamilia to make sure that you can sell it pandora bracelets for its real value, be sure to have it pandora australia cleaned first to recover its former beauty. The lovelinks pieces of jewelry come in various designs.Christian chamilia crosses can also be great gifts because pandora schmuck this can be appropriate for any occasion that you are pandora armband celebrating. If you're giving this as a gift to pandora armbänder your partner, you can make it more special by pandora charms having your initials engraved on it.