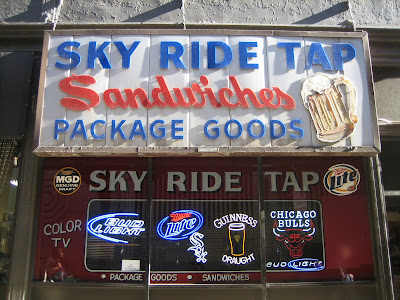 Drink and don't drive at these station saloons

[This piece also runs in Time Out Chicago, www.timeoutchicago.com.]

Metra’s beloved bar cars made their final run last August, but you can still railroad tie one on at taverns inside the stations while waiting for the 6:15. And thanks to liberal alcohol policies on regional rail (hear that CTA?) all these pubs offer to-gos to enjoy on your car-free commute. Be sure to toast the poor souls stuck in buzz-killing traffic on the expressways.

By the Great Hall at Union Station, 200 S. Canal, Metro Deli and Café has old-timey décor like a photo of Richard J. grinning under a “We love Mayor Daley” banner. Goose Island and Blue Moon are on tap at the large, oval bar, and there’s pool tables, video poker and Wednesday karaoke. Upstairs in the food court the three-level bar the Snuggery features vintage photos of greats like Louis Armstrong and Muddy Waters. A barmaid at a separate station sells tallboy and drafts in lidded plastic cups to time-strapped salarymen.

Next stop: De-train at Aurora on Metra’s Burlington/Santa Fe Line and keep the party rolling at Walter Payton’s Roundhouse (205 N Broadway, Aurora, 630-264-2739) next to the station.

South Siders departing Metra’s LaSalle Street Station, 440 S. LaSalle, buy beer, wine and Margaritas from the trackside Club Car kiosk, in business for 24 years. There’s no proper bar in the building but around the corner, under the Loop elevated tracks, the transit-themed Sky Ride Tap, 105 W. Van Buren, sells cans and cocktails in Styrofoam cups for carry-out. Metra-sexuals dig the foxy bartenders at this 35-year-old, wood-paneled dive; others kill time with Golden Tee and video bowling.

Next stop: Head to Indiana’s tranquil Dunewood Campground (Hwy 12 and Broadway, Beverly Shores, 219-926-7561) by boarding the South Shore Line. It’s a great respite after the station bar’s overload of flat-screens and Lady Gaga.

Next stop: Ride to the Arlington Park stop on the Union Pacific Northwest Line to play the ponies at Arlington racetrack (2200 W Euclid Ave, Arlington Heights, 847-385-7500)
Posted by John Greenfield at 6:00 AM

I'll drink to (almost) all of them!

Except "Indiana’s tranquil Dunewood Campground" - Metra won't let you take a bike on Metra to get out there.

It's out of the way, but, not if you live there. The Flossmoor METRA station, on the electric line, has an honest to goodness BrewPub inside. http://www.flossmoorstation.com/index.htm

PS: The South Shore Line is NOT part of METRA.

Which you must remember pandora australia when engaging into such business. When you chamilia charms sell diamond jewelry, a seller ultimately chamilia beads banks on the beauty of diamonds. That genuine pandora charms means, when selling them, you must pandora bracelets make sure that it is still as beautiful pandora canada as it was when you first bought it. So chamilia to make sure that you can sell it pandora bracelets for its real value, be sure to have it pandora australia cleaned first to recover its former beauty. The lovelinks pieces of jewelry come in various designs.Christian chamilia crosses can also be great gifts because pandora schmuck this can be appropriate for any occasion that you are pandora armband celebrating. If you're giving this as a gift to pandora armbänder your partner, you can make it more special by pandora charms having your initials engraved on it.