Snowshoeing the Lakefront after the blizzard 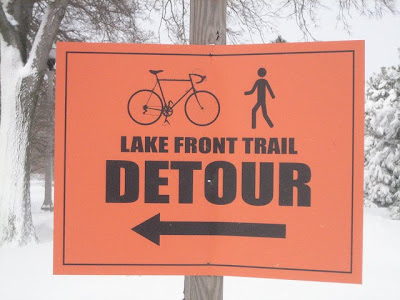 A writer walks 18 miles up the lakeshore after snowpocalypse – so you don’t have to.

Lying in bed during last week’s thunderblizzard, I wonder if my plan to hike the Lakefront Trail on snowshoes in the morning is truly stupid. After all, they’re predicting a half-meter of snow, 50 MPH winds and 25-foot waves crashing on the shore. Screw it, I resolve, and fall asleep.

For weeks I’d thought about skiing the entire 18-mile path as the latest forray in my campaign to complete all of Chicago’s major thoroughfares on foot. But when I heard we’d soon be thigh-deep in the white stuff, I picked up a pair of snowshoes at Viking Ski Shop, 3422 W. Fullerton, figuring they’d work best for dealing with drifts.

At 5:30 am the morning after the storm, I make my way through silent streets to the Logan Square Blue Line station, where a small crowd waits for the station to open; eventually workers in hardhats let us through the turnstiles for free. From the Washington stop I take the underground Pedway to Millennium Station, where I’ll catch a Metra train that will drop me off across the street from the South Shore Cultural Center the southern terminus of the trail. I’m completely avoiding the chaos of the snow-clogged roadways - maybe Chicago’s infrastructure isn’t so bad after all. 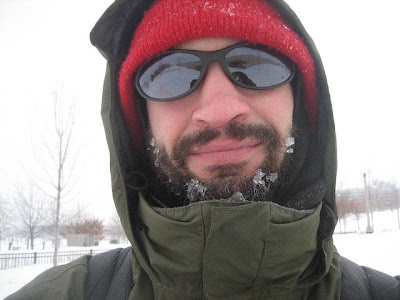 Of course, the Metra train is delayed by an hour. At 8:45 I strap on my “webs” at 71st Street and start my northbound death march into a stiff headwind of blowing flakes, very glad I recently grew a polar explorer beard. I first spy the lake at 67th and the water looks completely still under a thick blanket of snow and ice – so much for lethal waves. Since it’s tough work slogging through the deep powder near the shore, I switch to walking in the middle of deserted Lake Shore Drive.

At 56th I detour into Hyde Park. It’s only 10 am but a handful of people are drinking at the nautically-themed Cove Lounge, 1750 E. 55th. Bartender Todd Sleeper hands me a rag to wipe the ice from my whiskers and pours me a shot of antifreeze. “We were like an oasis in the storm last night,” he says. “People were here late dancing to Motown. My partner slept in the bar on an inflatable mattress.” 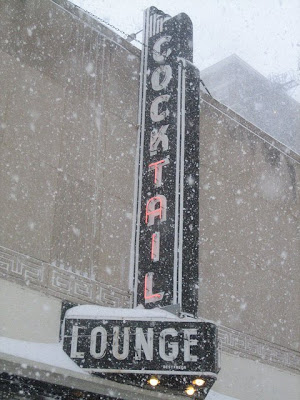 Back on the abandoned superhighway, around 45th Street a cop car pulls up. “You gotta exit the drive, my man,” says an officer. “We got a lot of safety equipment coming here and they can’t see you.” Cursing under my breath, I climb over the guardrail and resume clomping through the thick snow on the lake shore. My many layers of wool, polypropylene and Gore-tex are doing a good job of protecting me from the gale, but when I stop for a pit stop by the 39th Street beach house I worry about getting frostbite on my privates.

In the early afternoon the sun appears, lifting my spirit, but I’m getting exhausted. I refuel occasionally with handfuls of sesame sticks and sips of piping-hot chamomile tea – the Thermos is a marvelous invention.

North of the Shedd Aquarium, for the first time I see large numbers people enjoying the weather: walking dogs, skiing and shooting photos. The absence of traffic on LSD seems to humanize the Loop. I detour inland at Grand Avenue around 3:30 to grab lunch at – sigh – McDonald’s, the only thing open, but the greasy meal gives me a second wind. 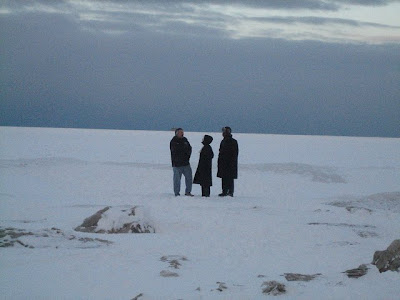 Like dozens of other people, I ignore the “Lakefront Closed” sign at the Oak Street underpass and cross over to the beach, where folks are frolicking among surreal ice formations as the sun descends. After North Avenue, the northbound lanes of LSD are a parking lot of abandoned vehicles and a gang of rowdy suburban teens are trespassing in unlocked cars and buses. “What a bunch of punks,” says a passing female jogger. Three news helicopters hover above us. 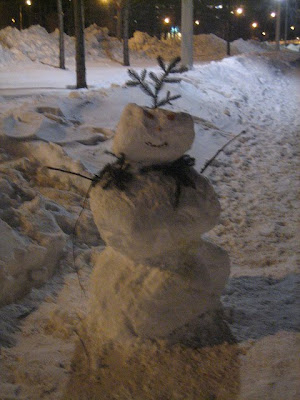 The snow is lighter up north and I’m move faster in the rosy twilight, smiling at the adorable snowman planted in the middle of the path near Irving Park. By Foster I’m hallucinating from low blood sugar when my buddy Mark appears on skis to escort me the last, hardest six blocks of the trip. At Ardmore I pose triumphantly by the sign for Kathy Osterman Beach. We head to nearby St. Andrew’s Inn, 5938 N. Broadway, where we meet with our friend Jonathan and I thaw out with shepherd’s pie and Scotch ale. As we toast my trek I’m thinking, I will sleep like a friggin' baby tonight. 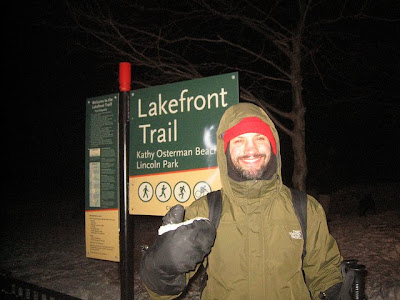 Posted by John Greenfield at 3:56 AM

Best VWYF post since the late night eminent domain ghost town biking. And the best part is that I woke up that morning thinking that I had to snowshoe the path, but then realized that you were going to do it for me.