OK to bike on the Lakefront Trail after 11 pm? 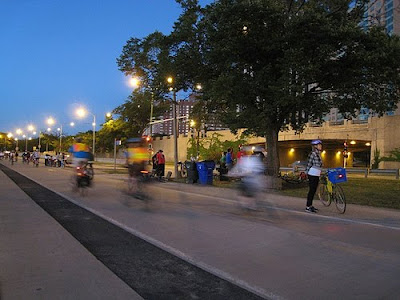 [This piece also runs in Time Out Chicago, www.timeoutchicago.com.]

Q: If Chicago’s parks and beaches are public property, then why can police kick people out at 11pm? Is there some sort of loophole that will let me use the parks after closing time?

A: The Chicago Park District’s legal code says beaches and parks are off-limits from 11 pm to 6 am, with exceptions made for events like the vampire-friendly L.A.T.E. Ride. “Those hours are set for the safety of patrons,” explains park district spokeswoman Marta Juaniza. To prevent drug dealing, prostitution and violent crime? “Whatever can happen in the dark,” Juaniza says.

Friends of the Parks’ Erma Tranter supports the curfew, noting New York has similar rules. “If there’s a basketball game going on after midnight, that’s a problem for people who need to sleep.” But if you want to use the Lakefront Trail for a late-night jog or to pedal home after last call, you’re in luck. Tranter says cops generally don’t ticket trail users. “They use common sense and don’t bother people who are recreating,” she says.

“Responsible users are not being hassled,” agrees Active Transportation Alliance’s Adolfo Hernandez, adding his group wants to see this de facto policy made official. “People rely on the Lakefront Trail for their commute during all hours of the day.”
Posted by John Greenfield at 11:00 PM

Who cares what Erma Tranter thinks? Isn't she the kook who wants valuable land destroyed so she can extend the north side of park east of LSD (thus increasing her home value)?

Tranter says "If there’s a basketball game going on after midnight, that’s a problem for people who need to sleep.” But then she says, don't worry bikers, cops “use common sense and don’t bother people who are recreating.”

Erma, people playing basketball in the park are recreating too!

Here is the FOTP spokeswoman's worldview in a nutshell, as far as I have ever been able to make out from her public statements: People like me culturally = 'good' park users. Other people = unsavory, stop them!

so basically she is saying they will go after people playing basketball because it is easy to stop them as they are all together, but they are not going to spend all night chasing individuals 'recreating'.

thomas sabo bracelet Some basic considerations can help a person to get the right par of shoes. Below are some of the important points that one may need to think about before getting the shoes. thomas sabo bracelets Style is not that important - majority of the people choose their tennis shoes considering only brand names and its looks. discount thomas sabo bracelet They don`t keep the importance of their feet up front most of the times. It can be a little hard to give up an awesome looking pair of shoes that matches your personality cheap thomas sabo bracelet But when it comes to the usage, they should be chosen based on their functionality. The tennis shoes that one is purchasing should be able to protect and support one`s feet ideally. thomas sabo bracelet clearance They are equally as good for keeping the water and weather away from your feet and both brands offer cheap golf shoes as well as their many expensive varieties. thomas sabo Shopping at FootJoy or Adidas can give you fashion, color, and a large line of shoes online and in stores.At any rate, be mindful of our golf game if you are a real competitor--know that shoes are the most vital part of your golfing attire. discount thomas sabo You need to shop around, compare prices. And get the most for your money. thomas sabo sale uk That doesn't mean you should opt for a pair of discount shoes that also have cheap quality. What would be the point of purchasing a shoe that is not comfortable to wear. thomas sabo jewellery If you care anything about your success in golfing, shop around. thomas sabo silver The Heel Box - it is an important part of the shoes.