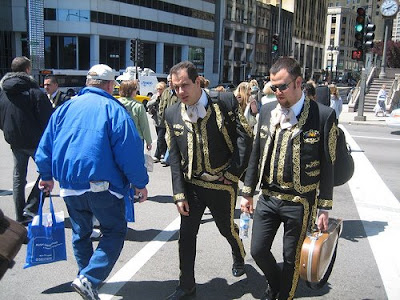 [This also runs in Time Out Chicago, www.timeoutchicago.com]

At Randolph and Michigan, why is it such a hassle to walk from the Chicago Cultural Center to Millennium Park?

Nowadays you have to cross the street three times to get there - north across Randolph, east across Michigan and south across Randolph again. But you used to be able to walk there directly in a marked crosswalk. The white lines are still faintly visible and many jaywalkers still follow this direct route, say Traffic Management Authority aides.

The City removed the crosswalk, along with another crossing at Washington, in August 2004, a month after the park opened, says Chicago Department of Transportation spokesman Brian Steele. At the time Mayor Daley was thinking about moving into the Heritage at Millennium Park condos, just west of the cultural center.

Steele says the area was flooded with visitors to the new park and traffic engineers studying the intersections observed many conflicts between turning motor vehicles and pedestrians. “It was creating a lot of safety concerns,” he says.

After a crew ground out the thermoplastic lines, many peds continued to use the same crossings, says Steele. Workers fenced off the curbs with bollards and chains and added signs: “NO CROSSING – PLEASE USE OTHER SIDE.” The fencing cost taxpayers $51,000, according to CDOT records. 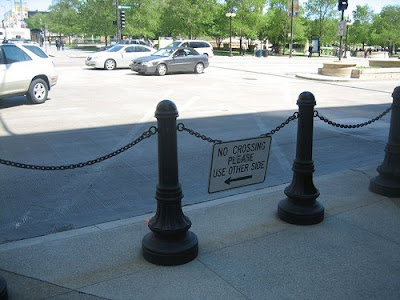 Asked whether the City considered the inconvenience to walkers when it removed the crosswalks, Steele says, “Point A to point B is not always the safest route. In return for the extra activity, pedestrians are in a much safer situation.”

Rob Sadowsky, executive director of the Chicagoland Bicycle Federation, which also advocates on walking issues, isn’t convinced. “The answer that we’ve heard from City is this was done to protect pedestrians, but the overwhelming message is this was done to ensure the flow of car traffic,” he says. “Michigan Avenue shouldn’t be a high-speed corridor; it should be an opportunity to stroll and explore.”
Posted by John Greenfield at 4:00 AM

Consider this: at every intersection where there is a left-turn arrow this must come at the expense of pedestrian traffic. Without the arrow the walk-light coincides with the green light. When the left-turn arrow is active the don't-walk light must be active in all directions.

This is more evidence where the movement of vehicles is more important than the safety of people.