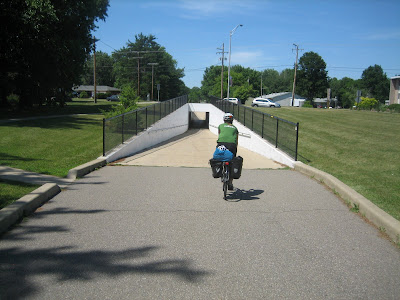 Northwest Indiana is terra incognita to most Chicagoans, but the new Northwest Indiana Bike Map is going to help change that. The map was produced this year by the Northwest Indiana Regional Planning Commission and the Chicagoland Bicycle Federation and is now available for free in many Chicago bike shops. You can request a copy by calling the planning commission at 219-763-6060 or visiting www.nirpc.org.

The new map picks up where the federation’s Chicagoland Bicycle Map leaves off, covering the entire Indiana lakefront region and beyond, using the exact same format as its Illinois counterpart. “NIRPC contracted us to help out with this so if it looks very similar to our map that’s no surprise,” says Keith Holt, South Side Community Liaison for the federation.

He says it makes sense that the Chicagoland Bicycle Federation helped create the map. “Northwest Indiana is basically part of the Chicago metropolitan area, and keeping it isolated by the state border doesn’t help cycling in the region. While other Chicago organizations have to stop at the border, we don’t.”

“The map was sorely needed,” says Holt. “I’ve always heard from people who were looking for good routes into Northwest Indiana. They’d say, ‘I wanna do it but I want to be safe and I don’t want to get lost.'”

Since he grew up in the South Shore neighborhood on Chicago’s Southeast Side, Holt says he already was familiar with some of the routes locals would take to the border for cheap beer and cigarettes. In the past he has referred cyclists to informal routes posted on the Internet by groups like the transportation advocacy organization Calumet Citizens for Connecting Communities, which also helped identify recommended routes for the bike map.

Now that there's a detailed map, Holt says more Chicagoans, such as members of the South Side’s Major Taylor Cycling Club, will consider the Hoosier Riviera when they’re looking for places to ride. He notes that since the map is a first-timer a few bugs may surface as cyclists give the routes a spin. “Some of these may not be the absolutely best routes yet,” he says. But the map will be edited and updated regularly as trails that are now under development are completed, such as the Pennsy Greenway which will connect Lansing, IL, with Crown Point, IN.

When you first look at the map, you may be surprised by how many inches of solid purple and blue lines there are, symbolizing existing paved and crushed limestone bike paths. In fact, you can already pedal from the Loop to the east end of Indiana Dunes National Lakeshore, about 70 miles, almost entirely on trails. Years ago I had done this trip on Route 12, a more direct route that stays closer to the coast but includes some truly nasty industrial stretches and several miles of riding on harrowing, high-speed highways.

Of course, you can get to the Dunes without a car very conveniently by catching the South Shore Line interurban train from the Loop’s Millennium Station – it has stops near both of the park’s campgrounds. But if you’re not in a hurry, bicycling the green, serene, off-street route is well worth the extra time and effort. It used to be a little tricky to navigate between the four trail segments that make up the route in Indiana, but with the new map it’s mostly a no-brainer.

From downtown Chicago, take the Lakefront Trail to the end of the line at the South Shore Cultural Center at 71st St. Follow the signed, on-street route, basically following Route 41, to the Burnham Greenway, which ends at Wolf Lake State Park. From there you can take Avenue O / Burnham Avenue /State st. / Sibley St. to the start of the largely urban Erie Lackawana Trail which heads southeast through Hammond, IN. Due to construction you’ll have to detour on Northcote / Hawthorne / Ridge to pick up the south half of the trail. 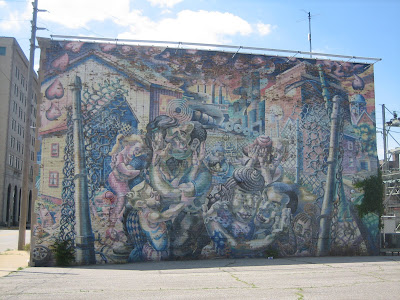 In the town of Griffith you meander a bit through the Oak Ridge Prairie County Park to get to the Oakland Savanna Trail. You’ll head east on this for a few miles through cool, wooded areas carpeted with ferns, then wiggle northeast a bit on streets through Hobart to pick up the Prairie Duneland Trail which heads northeast to Chesterton. From there you can pick up Waverly Rd. and head north to the crushed limestone Calumet Trail. 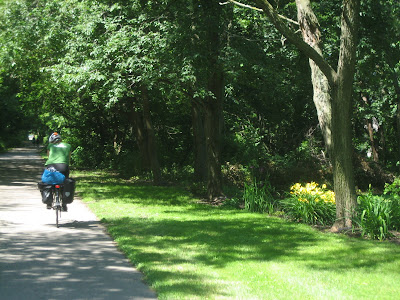 At that point you’ll be at the entrance to the shoreline’s most popular beach which also has an RV-style campground. But if you’re spending the night you should head a couple more miles east from there along the trail, or take Highway 12 if you’re in a hurry, to the Dunewood Campground near the Beverly Shores train stop. The wooded, car-free, walk-in sites at this location provide a much more tranquil camping experience.

You can get groceries and firewood at a convenience store near the train stop; unfortunately the nearby liquor store recently closed so if you care to imbibe, pick up supplies at Pat’s Liquors in Chesterton, which has a good selection of local beers and plays hippie music on the sound system. 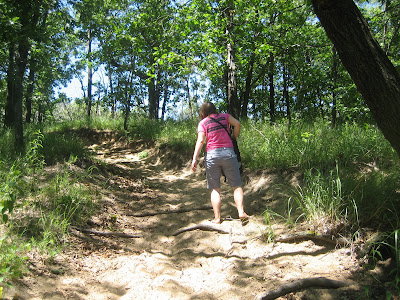 Spend a day or two at the Dunes if you can – there are many hiking trails and deserted beaches to explore in the area and the waves are often big enough for body surfing. The view of the Three Mile Island-style cooling tower for the power plant in Michigan City, IN, to the east just makes the experience more surreal. Next door to the plant, the Shoreline Brewery & Restaurant, 208 Wabash, makes a worthwhile side trip. Their t-shirt shows the cooling tower next to a mutant fish with the legend: “Don’t drink the water – drink the beer.”

When it’s time to ride home you’ll want to return on the Prairie Duneland Trail, but for a change of pace you might consider using the map to choose a grittier, though still very bike-able, on-street route from Hobart to Hammond, where you can make your way back to Chicago’s Burnham Greenway and Lakefront Path.

To fight beach withdrawal symptoms, you might want to make one last stop at the Marina Grill, 6400 S. on the Lakefront Path. Located in a former Coast Guard building, this Carribean / New Orleans-style restaurant features seating on a porch overlooking a harbor in Jackson Park. Mellow “yacht funk” like Al Jarreau and Earth, Wind and Fire plays on the speakers. It’s a great place to chill with a drink (although its currently BYOB due to new management) before finally heading back into the hustle-bustle of the big city.
Posted by John Greenfield at 8:00 AM

First they banned alcoholic beverages from the Dunewood Campground and now
the liquor store is closed!

Let me guess, did John Cougar move to LA, too?

How about some good news for once on this gloom and doom blog.

Of course, drinking is verboten in the state parks. Right John? :^)

I thought bikes were prohibited on the South Shore Line. At least that's what their policies say.